Back before the birth of my first child, Kim enrolled us in a birthing class taught at the hospital. As my first plan during the actual delivery had been to pace in the waiting room while she did all the hard work, the class opened my eyes as to where in the hospital Kim expected me to be.

The bulk of the class members were, like us, thirty-something year-old professionals who were just now starting families. One evening, all the fathers-to-be were segregated to listen to a young nurse tell us how rough life was going to be after the baby arrived. We all listened patiently as she worked herself into a lather before posing her climactic question, “The doctor says your baby needs special shoes, and they cost $50. What are you going to do?”

We all looked at each other like it was a trick question before the man to my right plaintatively said, “I would buy them.” Everyone nodding in agreement appeared to surprise the nurse, and the rest of her presentation was a little less dramatic. Telling Kim about the incident later, we laughed and agreed that sometimes there are things in life where cost is just not an issue.

A few months ago, I noticed one of my Kawasaki Zephyr 750 front fork seals was leaking oil, and the brakes were getting a bit spongy. Purchased new in 1991, this bike has always been amazingly trouble free, and I had no qualms about spending time or money on it now. Not just this exact moment, though, because the shop floor was currently occupied with a furniture refinishing effort.

A couple of weeks ago after returning home from a ride in the country, I noticed the rear turn signals dangling freely from their wires instead of standing parallel to the road – Age had apparently caught up with the signals’ plastic pedestals. 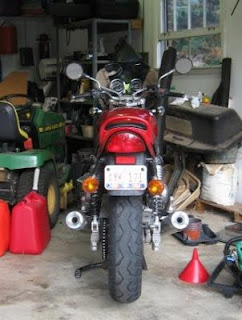 Although Kim now worries when I go motorcycling, she always smiles when she sees me in riding leathers, and this day was no different. Coming in from the shop, I let her smile for a bit before I said, “Baby needs new shoes”. She nodded, and I moved on to start a list of what the bike needed.

The Internet certainly makes researching/acquiring parts easier & faster than it used to be. In what appeared to be a stroke of good luck, one on-line parts house listed OEM parts available for every item on my list. So they got a big order which included new fork seals, fork oil, front & rear brake hoses, pads, caliper boots, and rear turn signals.

But it was too good to be true. A couple days later, after charging my card for the full amount, they emailed that the brake hoses and turn signals are No Longer Available. Fortunately, the demand for old motorcycle and ATV parts is such that these parts are available from aftermarket companies. So with the help of two other on-line marketers, my 18 year-old baby now had new shoes.

The “old shoes” had to be removed first: 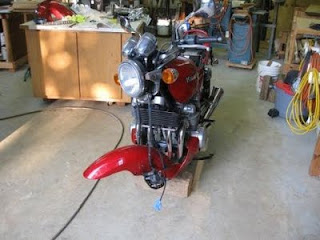 Motorcycles used to take up a lot of my time, and as a consequence my toolbox still had the special tools required for the current effort. 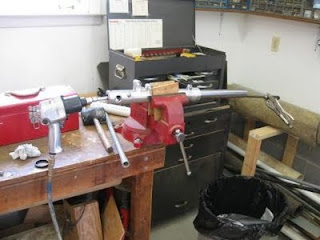 The last time the fork oil was changed, Super-Duper competition fork oil with moly was chosen as the replacement fluid as I was single, invincible, and thought such a blend was needed to accomplish my goal of wearing the sides of my motorcycle’s tires out long before the centers. I failed to meet that goal, and now that I’m married, and mortal, the forks were refilled with off-the-shelf fork oil. If nothing else, it is way easier to clean up than the exotic stuff used last time. 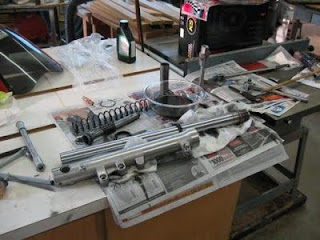 The aftermarket brake hoses did not look anything like the originals. But they were the correct length, and the new, different length banjo bolts supplied allowed the hoses to connect properly. The new turn signal lights were all but identical to the old ones. 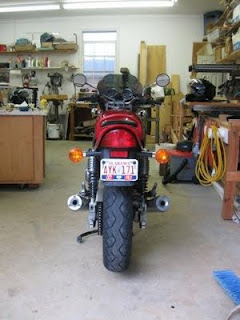 It was fun to work on a motorcycle again, and I still remember the priorities in my life when such fun took up more of my time. But life is all about changing priorities, and my next goal will probably be keeping one of my new priorities from piloting an old one before he’s older. 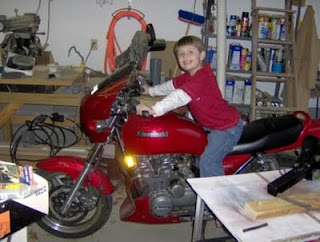 I suspect his mother will take an interest in that one.
.
Stayed tuned for the Labor Day trip to Raccoon Mountain. My Overlander is looking forward to a return visit.