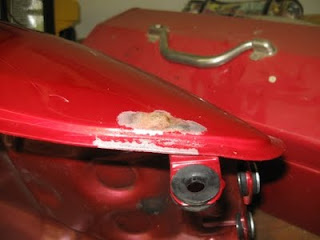 Last month, my ’91 Kawasaki ZR-750 “got new shoes” in the form of a significant amount of brake and front suspension work. “Baby” apparently now feels loved again, and, I guess, feels the time is right to reveal other issues.

The maintenance work’s check-out ride (after 100 miles of gentle break-in) must have been too intense because I walked through the shop the other morning to find a puddle of gas on the floor, and wrinkled paint on the gas tank’s bottom edge.

Irritatedly watching my current bike drip, my first thought was, “Am I to spend my life fixing motorcycle gas tanks?” as my first street bike, a ’77 Suzuki GS-750, had done the same thing. Then I laughed at myself after remembering the Suzuki’s repair took place around 21 years ago. Time flies between motorcycle repairs. 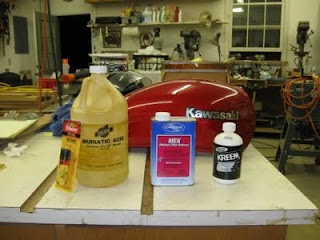 The GS-750 tank’s repair had been easy because one small blob of gasoline-rated epoxy fixed the one hole at the tank’s low spot. The Kawasaki’s tank, however, has multiple low spots, and looking closely, multiple pinholes of rust-out were found to be fighting their way through the paint. This tank was going to have to be KREEMed.

The idea is simple – Clean/etch the tank’s interior, rinse well, then slosh KREEM around. The coating will both fill in pinhole leaks, and leave a flexible plastic shell (in effect a new tank) behind. The activity has to be planned for one long session, though, because the Muriatic acid will eat the tank out if left too long, and the KREEM has to go in right after the acid is rinsed out.

As usual, the prep seemed to take as long as the task itself. 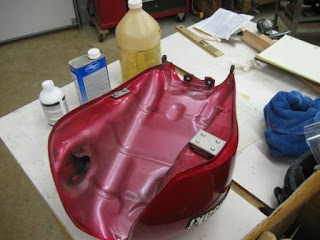 Blocking plates for the fuel pickup and gas gauge sending unit had to be made, and the existing leaks sealed with acid-rated goop. Afterwards, the tank was filled with two gallons of 10% Muriatic acid, and a vial of BBs (to help scrape off flaky rust). After preliminary sloshing, the tank was allowed to sit for 45 minutes or so. 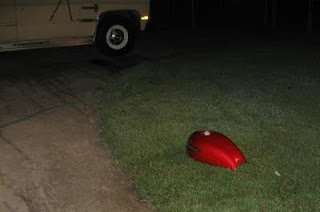 It’s sitting in the yard to make it easier to hose off should new pinholes open up due to the acid bath.

After that, the tank was sloshed every 15 minutes or so until it appeared all the rust was gone. The tank was in worse shape than originally thought because the acid had to stay in for around three hours. And it looked pretty full-bodied after being drained. 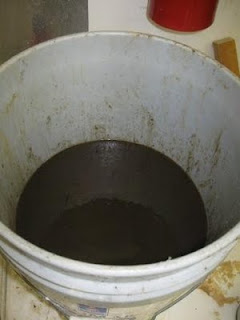 After a thorough water rinse, the tank was then triple-rinsed with MEK before being KREEMed per the bottle’s direction (pour in, slosh around, pour out excess). To both expedite drying and lessen the concentration of explosive fumes, a gentle draft of shop air was directed into the tank. 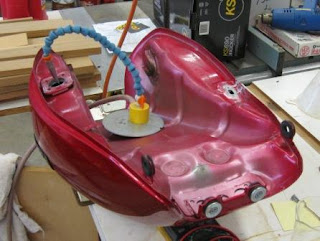 The toughest part of this repair was keeping the acid and MEK off the tank’s outside because either would dull (or remove) the finish. I was 95% successful there.

I have heard tales of people starting a repair like this only to have the gas tank all but fall apart during the acid wash. Luckily, my tale does not fall into that category. Only one new, unexpected hole popped up during the effort, and it was small enough for the KREEM to seal. 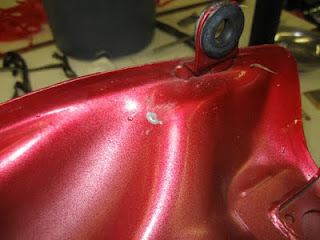 It’s raining now, or I’d be out riding. Instead, I’m sitting here Blogging. There’s a song in there somewhere…