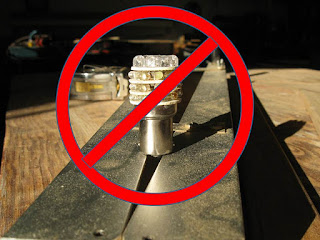 In June of last year, all the regular ole overhead bulbs in my vintage Airstream were replaced with modern-day, low-power, Light Emitting Diode light bulbs.

Two months later, a few of the original bulbs were returned to their sockets because the vintage trailer’s dark cherry interior absorbed a lot of light.

Yesterday, the remaining interior, LED bulbs were removed & replaced with the Overlander’s original incandescent bulbs. The only LED bulb in place now is mounted in the exterior scare light.

Had these LED bulbs been made with super-bright LEDs, I probably would have not had this problem.

Plans are to keep my eyes open for new products – the primary reason LED bulbs were considered was to save my OEM light fixtures’ lenses & switches.