Over the course of the past few camping trips, Kim repeatedly noticed liquid collecting around the base of the toilet. Initially, I thought it was due to either my modified way of showering, or poor aim on the part of the Boyz. So the Boyz got another lecture on the importance of giving full attention to their aim, and I resolved to keep shower water in the shower. But the puddle kept reappearing.

So after the last camping trip, I started troubleshooting, and found the “dripping gun”. The culprit was the vacuum breaker mounted on the back of the toilet. 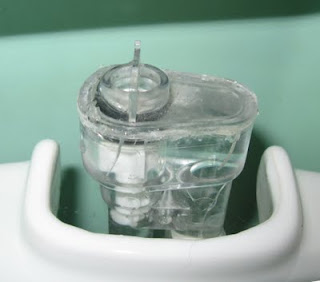 The vacuum breaker’s purpose in life is to keep toilet water from being sucked back into the fresh water line. It does this by using flush pressure to force a piston to seal an air hole. When there’s no flush pressure, the piston moves away from the hole to let air in to preclude the possibility of siphoning.

These devices usually go bad when something happens to the rubber seal around the piston. Flush water then leaks past the seal, and onto the floor. But in my case, the device went bad because it was made of the wrong type of plastic, and had cracked itself to death. Before you say, “or it froze & cracked because you did not winterize properly”, I have high confidence that I did not fall asleep at the helm of last year’s winterization effort. Plus, the problem popped up in the middle of the season, and not at the beginning.

But the kicker is that this device only holds water when the toilet is being flushed. Other than a residual drop or two of water, it is dry most of the time. This vacuum breaker failed because a poor choice of materials was made at the factory.

Fortunately, the replacement part appears to be made of a different type of plastic. Here’s a picture of the new and old parts together 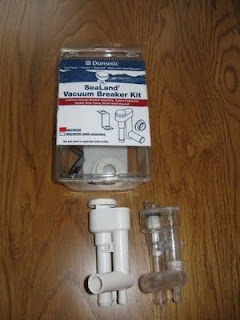 Initially, it appeared the toilet would have to be removed to gain access to the vacuum breaker. I really did not want to remove the toilet because, in addition to the two closet flange fasteners, there are two lag bolts holding the back of the toilet to the floor itself. My preference is to NOT remove bolts lagged into wood unless I really have to. Fortunately, my toilet is of a two-part construction. Loosening one big radiator-style hose clamp allowed the bowl to be removed to gain access to the work area. 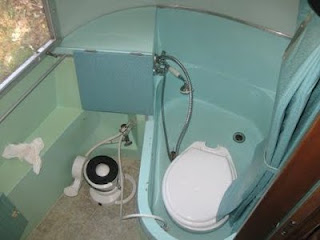 Installation was quick & easy with the bowl out of the way. The work was done before I knew it.

In other news, while waiting for the replacement part to come in, I took a look at the pantry to see what could be done about getting more light into it so we could find stuff without having to use a flashlight. 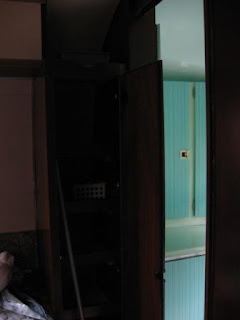 Ground-rules were simple – Nothing battery powered or florescent. The one RV parts supply catalog I have had nothing that really inspired me so a trip was made to the local Big Box store. Kitchen lighting has come a long way since I last looked. What ended up catching my eye were the 2-1/2 D xenon lights. Both 12 vdc & 120 vac models were available, and each had touch switches.

Reasoning that I did not want to run into dead battery issues if/when someone forgot to turn off the lights, the 120 vac model was chosen. Mounting was easy enough, and the lights were wired to the converter outlet underneath the bathroom sink. 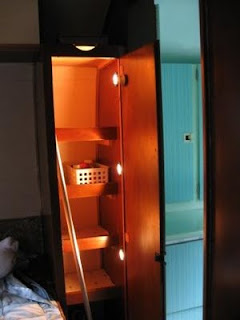 The touch switch is located on the door near the top light. The additional lighting is great, and is something I wish I had done many seasons ago.

Now that I think about it, these two projects are the only substantial work (other than starting the season with a new battery) which has been done on the Airstream this year. While one more small task remains (repairing a light fixture), that’s no big shakes. Pretty low maintenance for this year’s seven trips which covered 6123 miles!

Posted by TomW at 11:24 AM No comments: Links to this post

The Mighty Suburban guided our Overlander back to Disney World’s Fort Wilderness campground a few weeks ago just in time for the Boyz to attend Mickey’s Not So Scary Halloween Party. 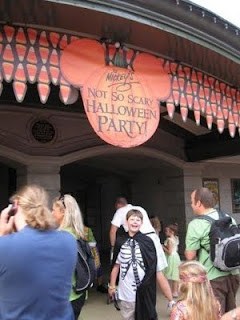 This makes our fourth voyage to the Walt Disney World Resort, and each trip has its own special memories. Although we usually make the trip with only one overnight stop, two stops were planned for this trip due to the Boyz’ school schedule. The first stop at Ozark Travel Park went without incident. They have improved the place since we were there last year, and it didn’t look bad then. As always, the Boyz thought their pool was great.

The next morning, it was on to Ocala Florida where Kim had booked us at a local RV park for that night. Finding no one at the office after our arrival somewhat annoyed Kim because they had never responded to her email where she asked for a site number. The park was apparently an extension of a RV store next door, and it too was closed…on a Saturday; Go figure. But the park had plenty of nice, open spaces available so we just found one we liked, and backed in. As the temperature was in the lower nineties, the first thing done was to hook up the Airstream’s 30-amp power cord to get the air conditioner online. Or try to. Lo and behold, the service was 50-amp only. I had heard this connection dilemma could occur, but had decided that if or when it did, I would buy a power cord adapter at the camp store. But with everything in sight closed, and every site having the same 50-amp service, we had no choice but to move on.

We had noticed another campground near the interstate on our way in, so we set course for it. What a dump! It was ¾-full of mostly full-timers whose avocation appeared to be junk collection. We almost bit the bullet for one night until we noticed the wasps continually circling the Overlander. Checking her notes, Kim found a KOA around 30 miles away. Confirming they had a vacancy, we left Ocala behind us.

Although the Wildwood KOA is an older park, the owner obviously takes great pride in maintaining the bathhouse & pool. And we got to park right next to both. 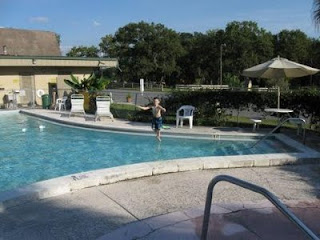 Dinner that night had been pre-planned to be Tom’s famous chicken rollups. A fajita-like meal in general, it one of only a few entrees which pleases the entire family. Made best in my 14-inch, cast-iron skillet, the turkey cooker burner had been brought along specifically for the effort. As luck would have it, one of the campground’s amenities was special turkey burner concrete pads conveniently located nearby (at least when no when is camping next to you). 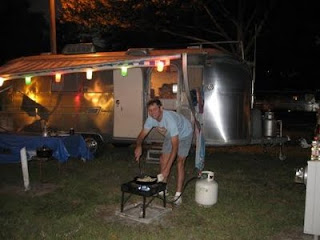 Everyone ended up glad that we had left Ocala behind us. And, the next morning, we were but a few hours from Disney World.

Fort Wilderness consistently ranks high in magazine write-ups, and is the best campground we personally have ever visited. Kim told me that many of the campground’s sites had been widened & lengthened over the course of this year, and our Loop 400 site had been one of them. 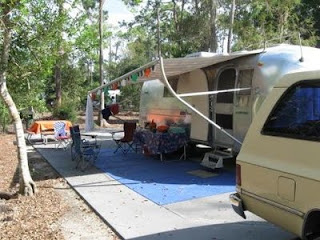 The extra width was nice, but the added length was wasted on our 26 foot Airstream. 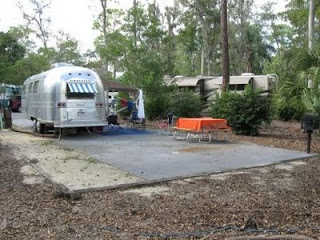 If I had to guess, I would say that Fort Wilderness is trying to accommodate more humongous, class-A RVs. Space-wise, the goal was met. Power-wise, there is room for improvement as my voltmeter only read ~110 vac with the AC on. The voltage was enough within my comfort zone to run the AC, but this is the first time I have had low voltage at Fort Wilderness. And with the temperature in the upper 90s most days, we needed AC. Everything else about the campground, though, was great. 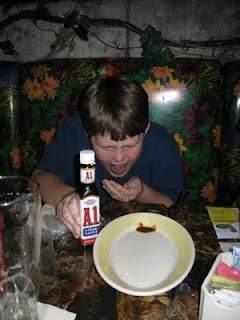 The first time we visited Fort Wilderness, a couple of peacocks graced our site every now & then. I thought it was pretty cool. The pair of armadillos who visited this time just did not have the same allure. 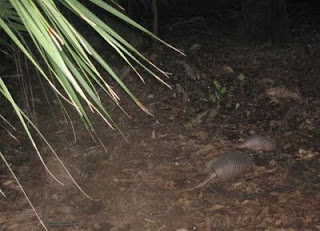 This visit was the first time Daniel could “drive” a Speedway car all by himself. Jared still needed his mom as copilot. Here’s the family just when Daniel figured out I had just stopped my car. 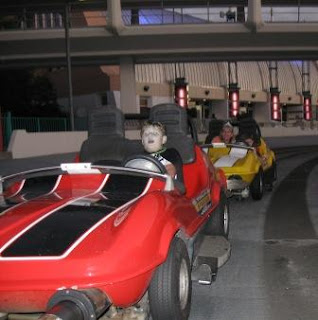 The campground modified its pool since we last visited. There is no more “deep end”, and a very nice water slide had been added. 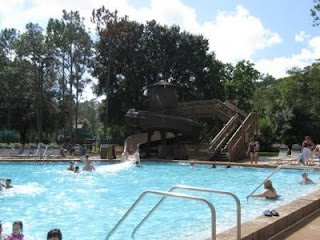 Kim liked the new enhancement, but found it tough to slide and hold on to her RayBans at the same time. 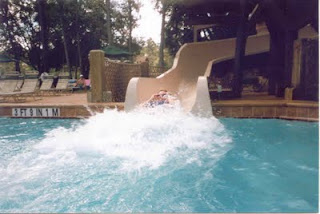 While Kim & the Boyz swam, I took our rented golf cart out on patrol to see other trailers at the campground, and what other vacationers were towing with. Safety wise, I am very comfortable with my big, heavy, ¾-ton Suburban towing my ~5000 pound Overlander coupled together with a Reese Dual-Cam Weight-distributing hitch. Hensley is, from what I read, the cat’s meow in hitches, but after research, I decided my Airstream was not heavy enough to benefit from this extremely high-dollar hitch. This pop-up trailer’s owner decided differently, and his tow vehicle is an F-150. 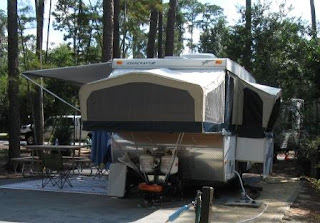 I saw another, similarly-sized pop-up being towed by a new, 8.1 liter Silverado with the Allison transmission. No Hensley hitch, though. My Safety Hat is off to these two families. 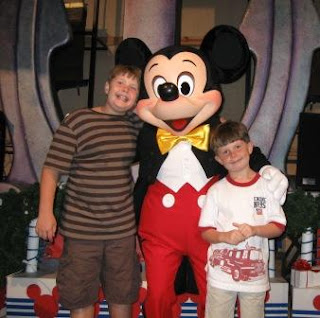 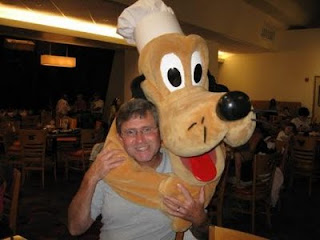 The only thing Fort Wilderness does not offer is maid service. 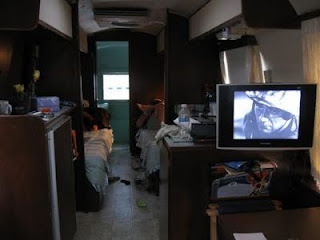 Bonus Brownie points if you can name the non-Disney DVD playing above.

We had Park Hopper passes for the week we spent at Disney, and thoroughly enjoyed repeating our favorite rides & attractions across the Disney complex. One attraction we had never visited was Disney’s Water Park. Somehow, though, we did not end up with a lot of pictures of it. But it was not because we did not enjoy the visit. 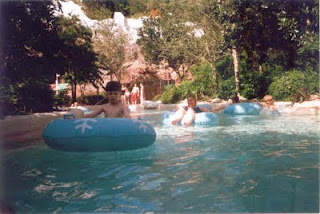 But all great vacations must eventually end, and the Mighty Burb was finally pointed toward the Chattahoochee KOA remotely located in the Florida Panhandle. It was raining when we got there, and Kim was kinda glum. Although she wasn’t complaining, I knew that between being tired, and missing her college alma mater play football (no cable at this KOA), she was just ready to get home. The rain kept the Boyz out of the pool, so they weren’t too happy either.

I ran up the Airstream’s digital-ready bow-tie antenna, and used my compass to point it towards civilization, and guess what I found? 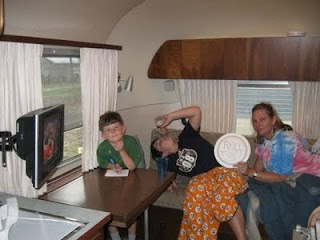 All was now well with Kim. The Boyz then cheered up after seeing their mom happy. The rain eventually slacked up enough for Jared & me to grill hamburgers. 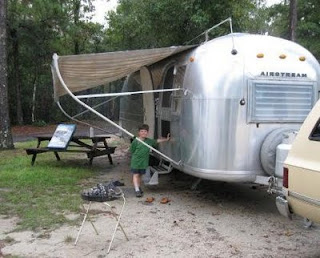 The next day saw us arriving safely back home. It was another great trip to Disney World. If you camp, and have never visited Fort Wilderness, I highly recommend planning a trip.