In preparation of next week’s Airstream trip to beach, the Overlander was moved out into the open for easier washing & general de-winterizing. 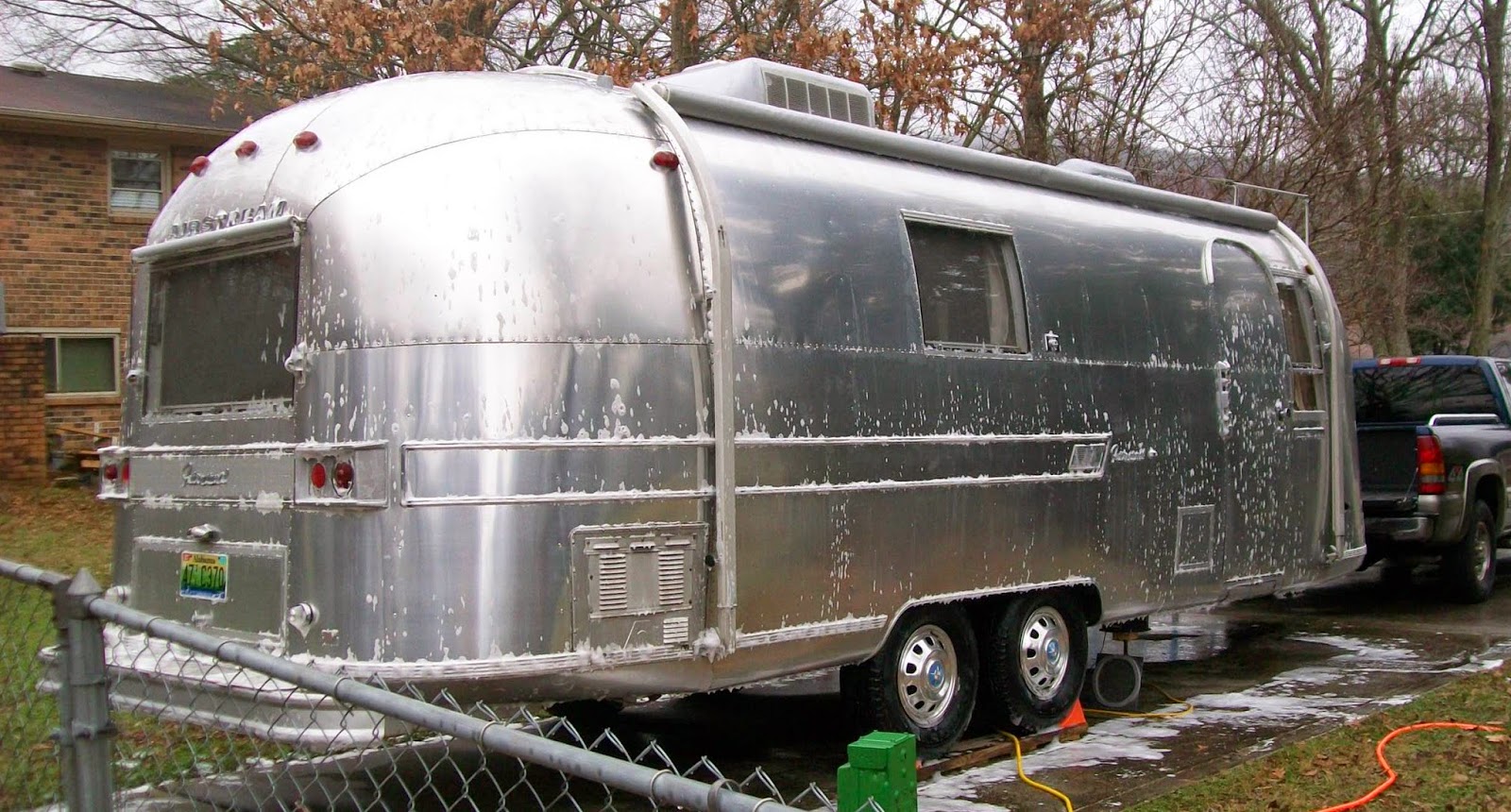 There has been a curb-side, rooftop, interior leak for some time now that seemed to get worse near the end of last camping season.  In an effort to locate it, an electric leaf blower was pointed into the cooktop exhaust vent to pressurize the camper while it was being washed. 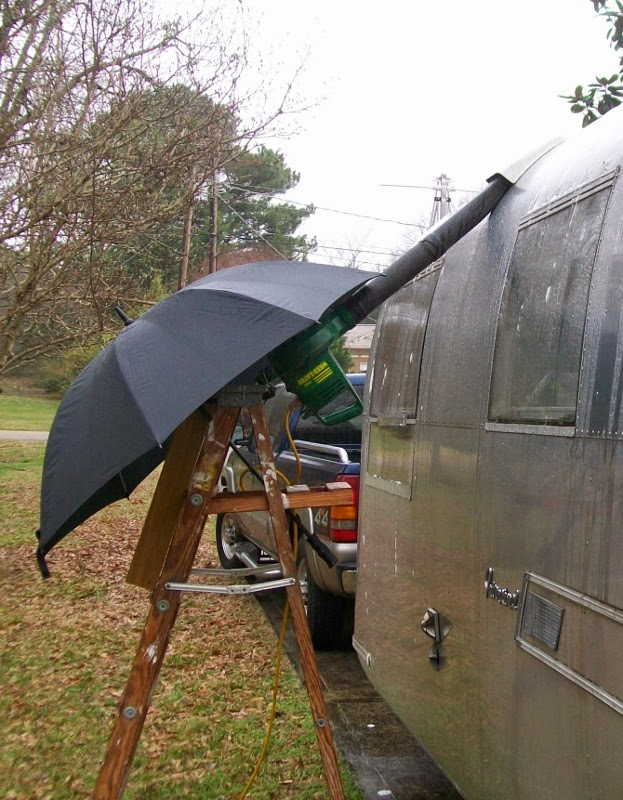 After blocking off the refrigerator’s floor & roof vents, the exterior was washed with an extra amount of Ivory dish soap.  Due to it being a drizzly day, no rinsing was done until the very end.  No joy.  The only leaks which blew bubbles were the expected areas like doors where it is not really an issue because there is secondary containment. 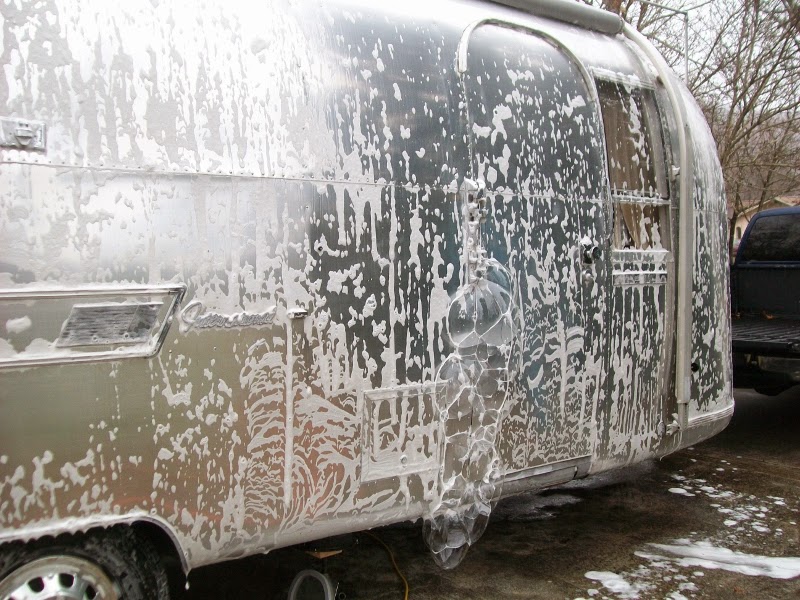 Frustratingly, even with the positive pressure, there was a couple tablespoons of water in the bathroom near the window.  The leak must be somewhere in the Bay Breeze A/C.  Disassembly will be required.  But not today.

Since we usually do full-hookups, it has been quite some time since the blue boy has seen action.  It seemed prudent to check its integrity since the Airstream will only have power & water at our Camping Season Opener. 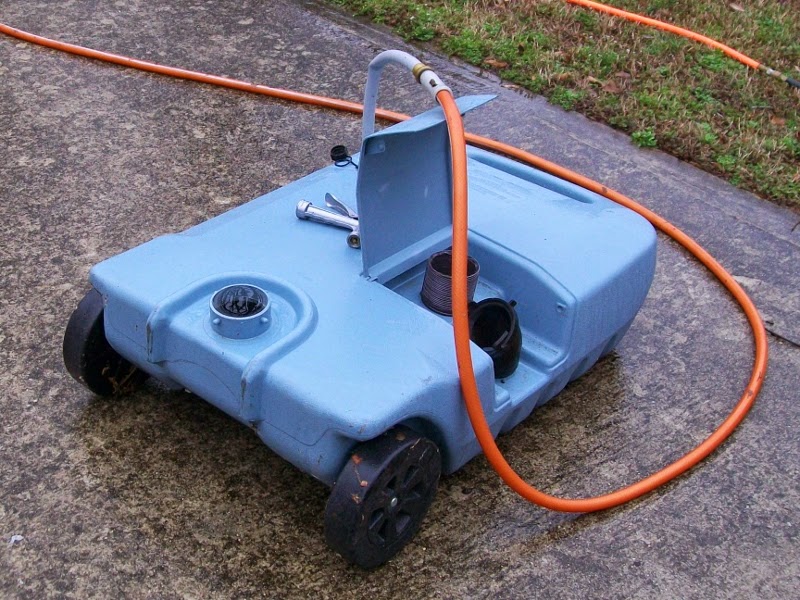 Next up was re-hydrating the plumbing.  The cold side went without a hitch.  Hot side not so much.  Five or 10 seconds after the water heater filled up the kitchen faucet went from spitting air & water to just a slow trickle of water.  The aerator had filled with a variety of boogers. 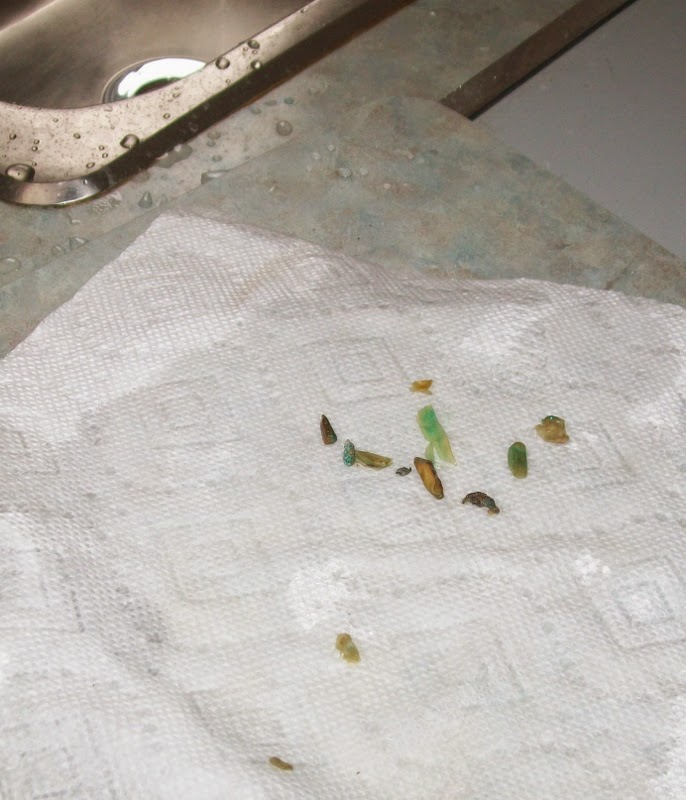 I don’t recall ever seeing boogers on the hot side.  Especially green ones.  Anyhoo, after more flushing, both hot & cold systems were blown out with compressed air, and refilled with a stouter-than-usual Clorox solution from the white tank.

After blowing that out, the systems were refilled from shore water.

Next up were the gas appliances.  All three cooktop burners had perfect flames. 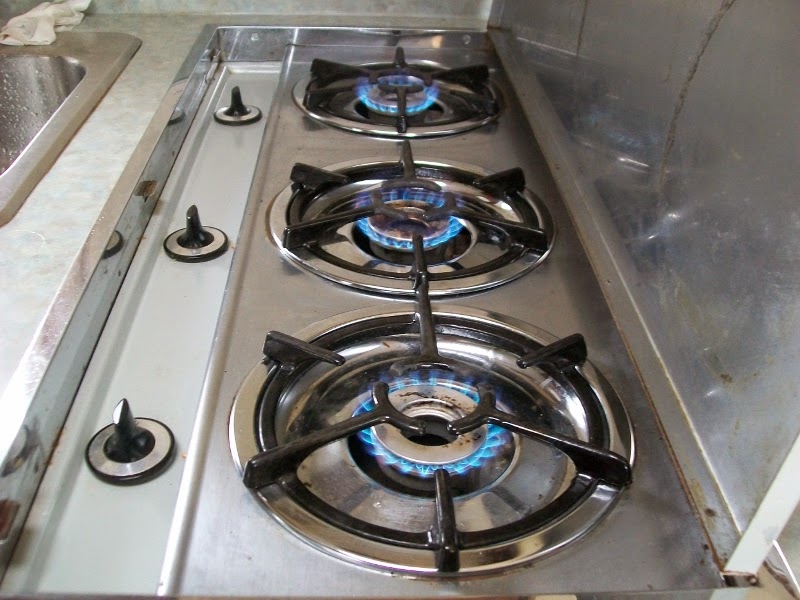 The furnace lit with less trouble than usual and ran beautifully.  Although there are no plans to run it next week, since the 48 year-old device was not used last season I was just curious to see if it was mad about being left out.  Apparently not.

The refrigerator pilot lit easily and had a pleasing, gentle roar to it (no build-up in the burner to clean) and ended up making ice cubes in the freezer.  The fridge was later switched to electric and the ice stayed frozen.  So I went ahead & stocked the bottom with my usual “mineral water”.

The original, Bowen/Atwood water heater fired up & cycled with no complaint. 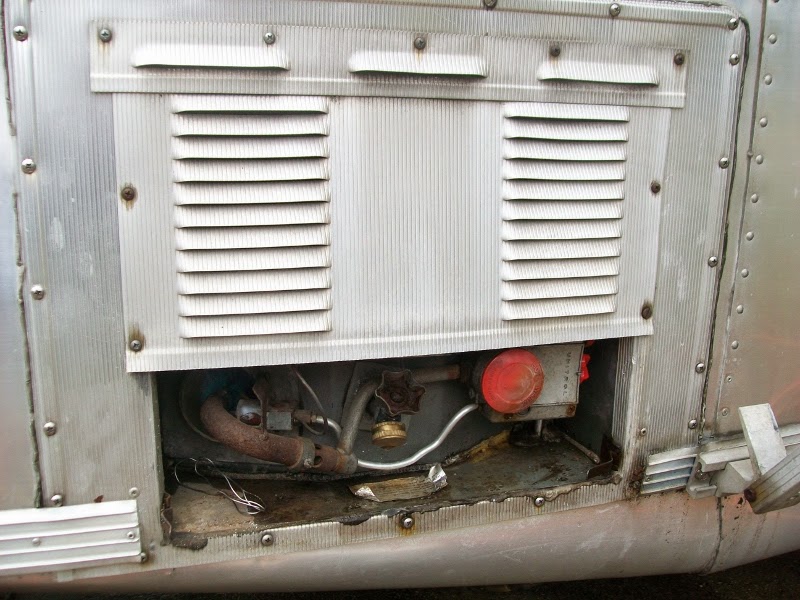 Both the oven & air conditioner were run through their paces and found to be ready for the upcoming trip.  Last but not least, the radio also checked out fine.

The weather cleared up enough later for me to replace some exterior parts.

A year or two after the Overlander returned to the road after a long hiatus, I had occasion to show it to my uncle the original owner.  Although he was a man of few words, he chose to snicker about how I had not replaced the rusty latches on the rock guard.  The ultimate reason was that I had run out of money for incidentals.  The runner-up reason was that the only place selling replacements at the time still sold them stamped out of rustable steel.

Luckily, Vintage Trailer Supply expanded their inventory, and appeared to appreciate the need to market a better product.  They persuaded the Original Equipment Manufacturer to stamp a run made out of stainless steel.  I wish Uncle Les was still around to see the end result – It was quite an improvement. 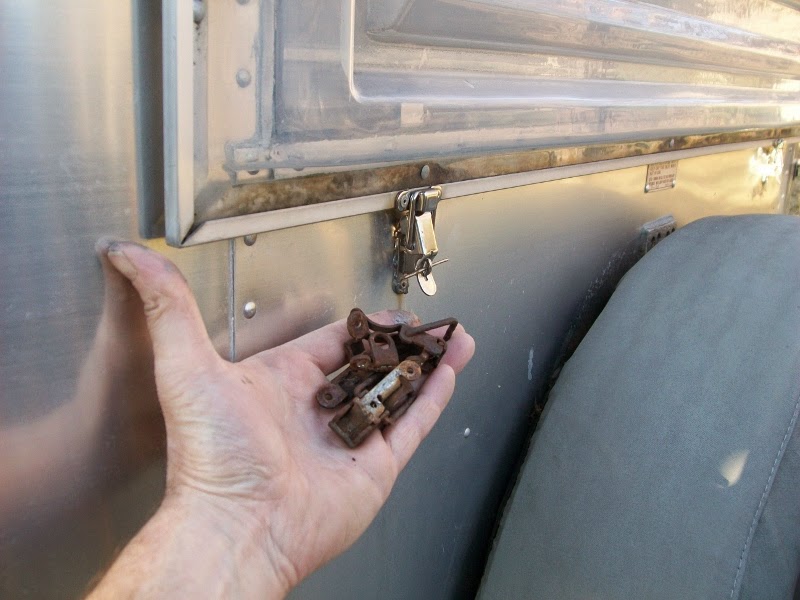 Coming around the home stretch, the day was supposed to conclude with the replacement of a fractured door-jamb striker pocket.  But while sizing up the task, I noticed the door knob had stopped actuating the striker from the inside even though the outside knob still worked as normal.

My heart sank.  Years ago while learning the best ways to refurbish my American Classic, I kept reading tales about how expensive ($200 – $300) these locks were to replace since the OEM (Theo. Bargman Co.) was no longer in business.  And that’s IF a replacement, usually a refurbed unit, could be found.  The best case in my situation was that the problem was due to a loose screw like Frank’s Trailer Works blogged about awhile back.

Sadly, after removal & disassembly the problem was revealed to be a broken pot-metal striker.  From experience, I know pot-metal can neither be welded nor glued successfully.  This probably meant a new lock assembly would be necessary because who would be making new parts for a 48 year-old lock?

Vintage Trailer Supply would!  By virtue of being milled from an aluminum billet, the new part is naturally stronger than the original part.  Reasonably priced, too – cheaper than I could have made it myself.  The cost to next-day ship it was lower than some vendors’ price to “get it when it gets there” cost.  I really enjoy doing business with VTS. 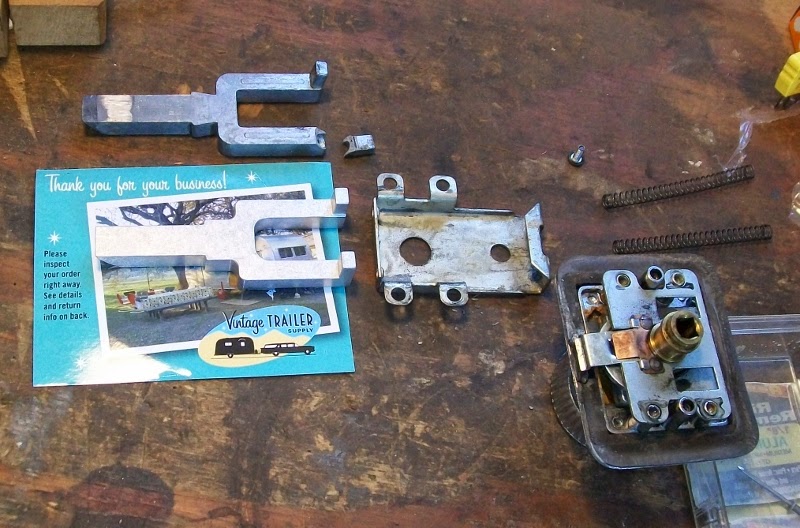 As expected, the new part fit like a glove.  Reassembly went without incident, and before long the new striker from VTS was interfacing with the new striker pocket from VTS like nothing had ever gone wrong. 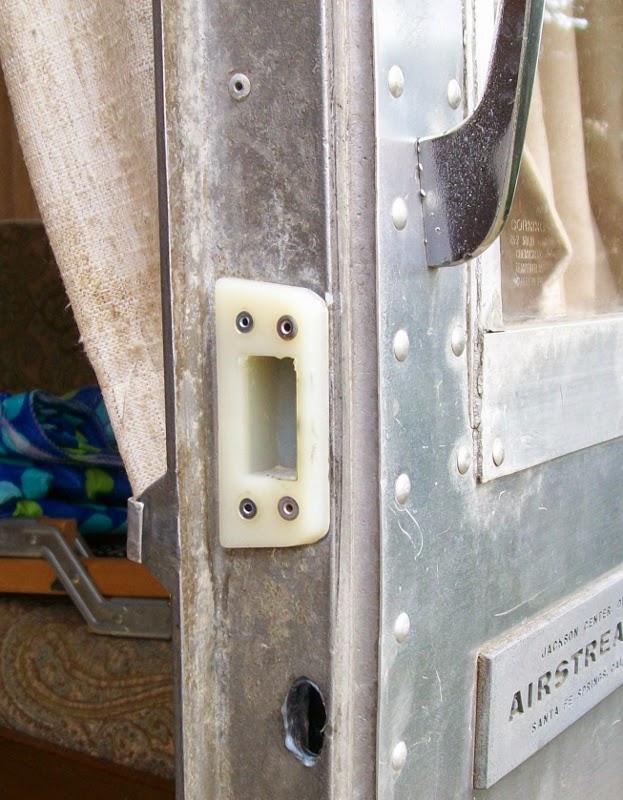 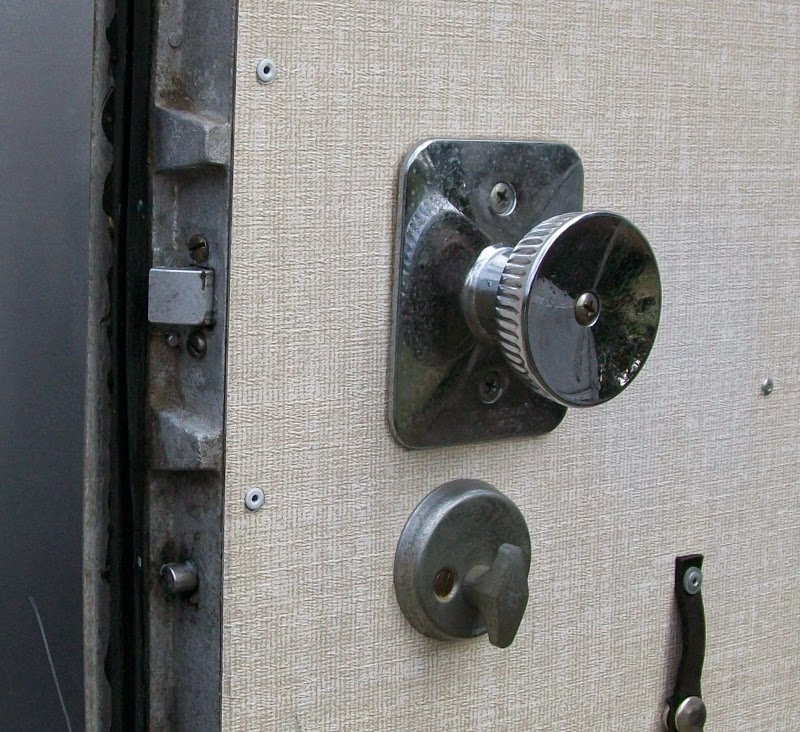 Although I was happy to spend so little on the repair, had I have had to spend considerably more there would have been no complaint because my vintage Airstream has been very good to me cost wise.  After the initial refurb 12 years ago, the only money of real consequence spent on maintenance has been on two different air conditioner issues.  I am continually surprised how much mileage we have gotten out of the original appliances.

Camping in 2015 appears to be getting off to a good start.  I can hardly wait until next week’s Florida trip.