Natural gas is a phenomenal source of energy and does a fantastic job of keeping our house warm.  Surprisingly, even with many 18 degF days this winter, our power bill has been higher than the gas bill.  Granted, with all the fracking going on, natural gas is cheap & readily available.  But for the first time since we have lived here, it has been cheaper to heat our house in cold weather than it was to cool it during summer.

I am usually a big proponent of using natural gas for any kind of heating simply because it typically does a better job.  To that end, in addition to gas heat our house has a gas cooktop, and a gas 40 gallon water heater.  We’ll keep the electric dryer because I heard the gas version yellows clothes.  The only big heat user left is a 40 gallon electric water heater on a timer in series with the gas version installed long ago when we had no children and electricity was cheaper.

That electric water heater is now 19 years old, and has been limping along since the upper thermostat went kaput several years ago.  The timer was bypassed near the end of the Clinton administration because with small children, we seemed to constantly need a lot of hot water.  Marketed by Envir-O-Temp & made by American Water Heaters in Tennessee, it has certainly been the Eveready Bunny of water heaters.

Between trying to lower our power bill and knowing the tank will not last forever, the numbers were run to compare the current gas versus electric water heating costs.  In unsurprising news, around here it now costs roughly half as much money to heat water with gas as it does with electricity.  The added bonus of a gas water heater’s faster recovery time made it clear we were through heating water with electricity.

The next Saturday’s clear, warm weather afforded the perfect opportunity to run an additional Type B vent pipe through the garage’s ceiling & roof.  The original plan had been to pick up a new water heater afterwards and decide whether to install it in what remained of the weekend, or wait till another day.  After arriving at the Store, the plan was quickly modified to, “go home and study-up on the new electronic thermostat (gas valve) now being used by everyone”.

To me, a gas water heater should work while connected to nothing but gas & water.  That way, if the power goes out, like it did for a week a few years ago, we will still have hot water.  Some high-efficiency gas water heaters require 120 VAC to power a blower.  While perusing the selection to make sure a water heater was available without a power cord, all brands were noticed to be using the exact same Honeywell electronified thermostat.  Some even have WiFi capability.  No brand in any store had the old-style thermostat like I kept from the last water heater I replaced. 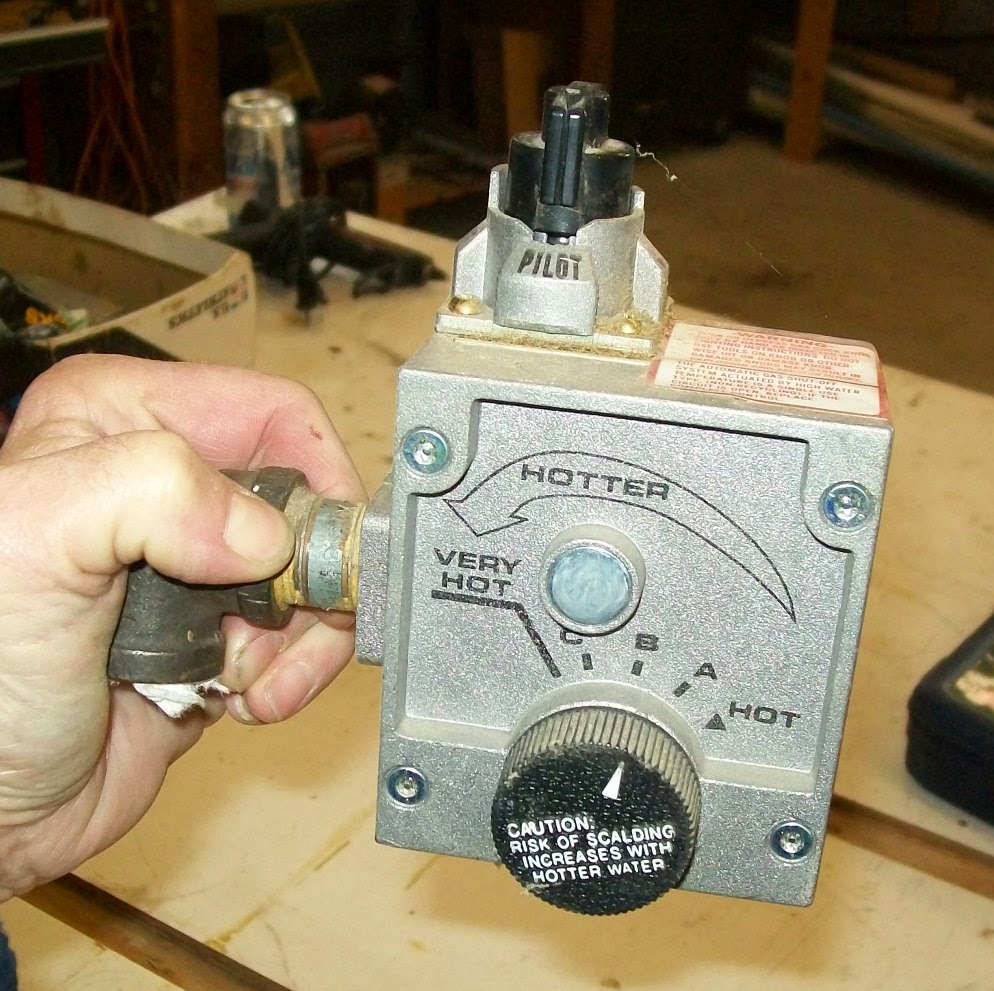 After further reading, I found that the new style thermostat has a circuit board with a processor & memory chip and is powered by a souped-up thermocouple called a thermal pile.  No additional power is needed.  Sadly the Internet is full of horror stories about this thermostat.  Specifically, if the temperature is set too high, the temperature may exceed some limit known only to the controller, and the entire assembly has to be replaced because a “die & never work again” message is written to memory.

Often blamed on sediment in the tank, this scenario is one of the most common problems with the new-style Honeywell gas valve.  From what I can surmise, the folks at Honeywell must have been trying to emulate the meltable thermal fuse function found in the old-style gas valves.  Further reading revealed the Company has since modified the design by adding an insulating sleeve to the temperature probe to make it less sensitive to sediment.

I started feeling better after reading that the water heater manufacturers are apparently sympathetic to the whole issue, and are quick to send out replacement thermostats.  Johnny down at A-1 Appliance felt the high number of complaints was due to the fact that all water heater manufacturers are now using this controller.  Statistically, with more implementations there will be more issues.  After remembering a similar story about my Goodyear Marathon trailer tires I was at peace with purchasing the new technology.

My 15 year-old drove us in the snow to get the new water heater since he needed the inclement weather driving experience. 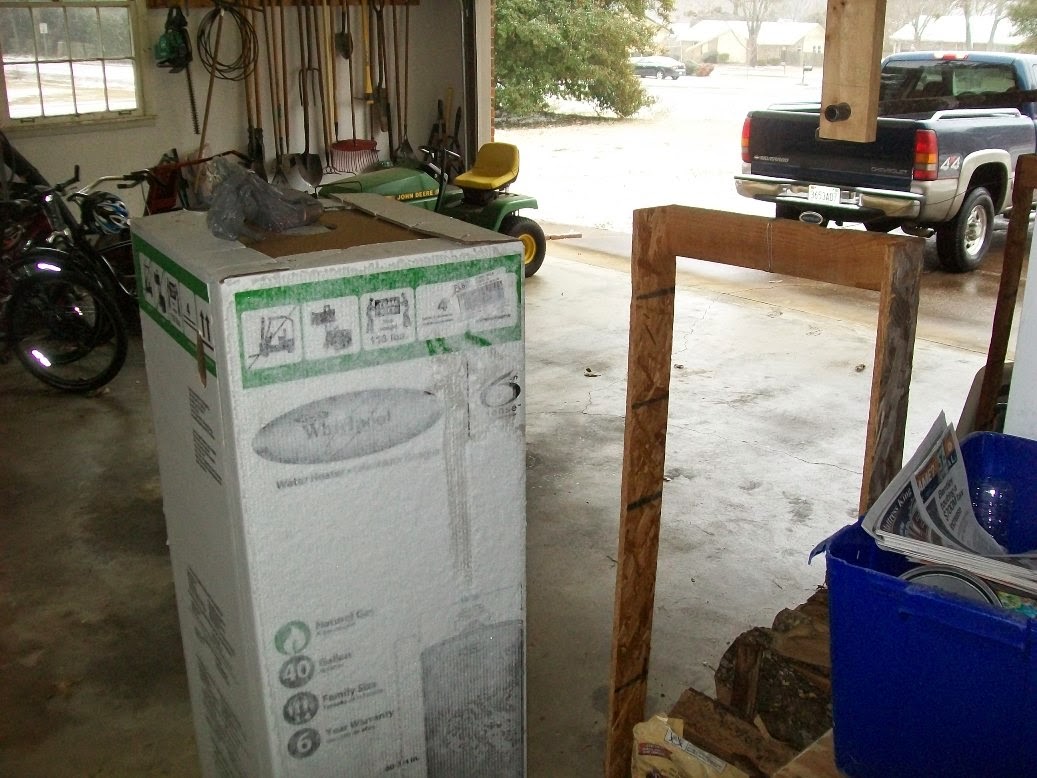 A new Whirlpool-brand water heater was purchased because it too is now made by American Water Heaters.

Other than sediment briefly clogging the drain hose, the replacement went without a hitch.

I love working with copper plumbing: 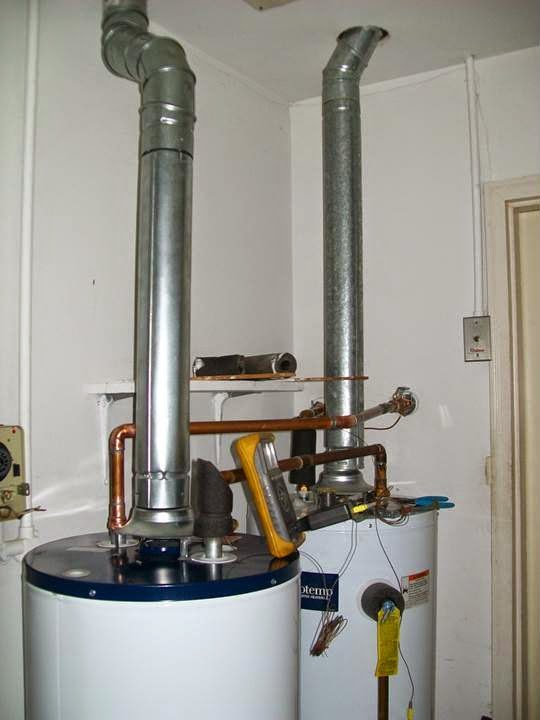 A new feature was added to this installation – a hot/cold water pipe bonding wire where the pipes perforate the wall. 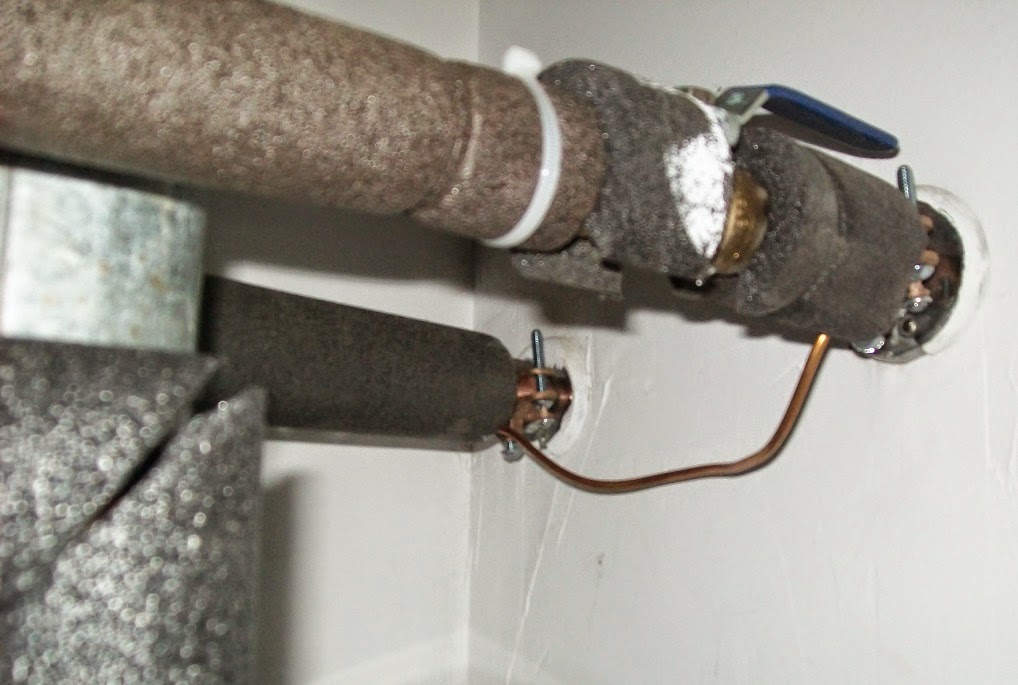 Although not required in Alabama, the potential benefits, from what I read, appeared to out-weigh the small cost of the parts required.

Even with the horror stories about overheating being fresh on my mind, I still wanted the kitchen dishwasher to get water with a temperature of at least 120 degF.  With the aid of a temperature probe on my multi-meter each water heater’s thermostat was adjusted for a tank outlet temperature of ~140 degF. 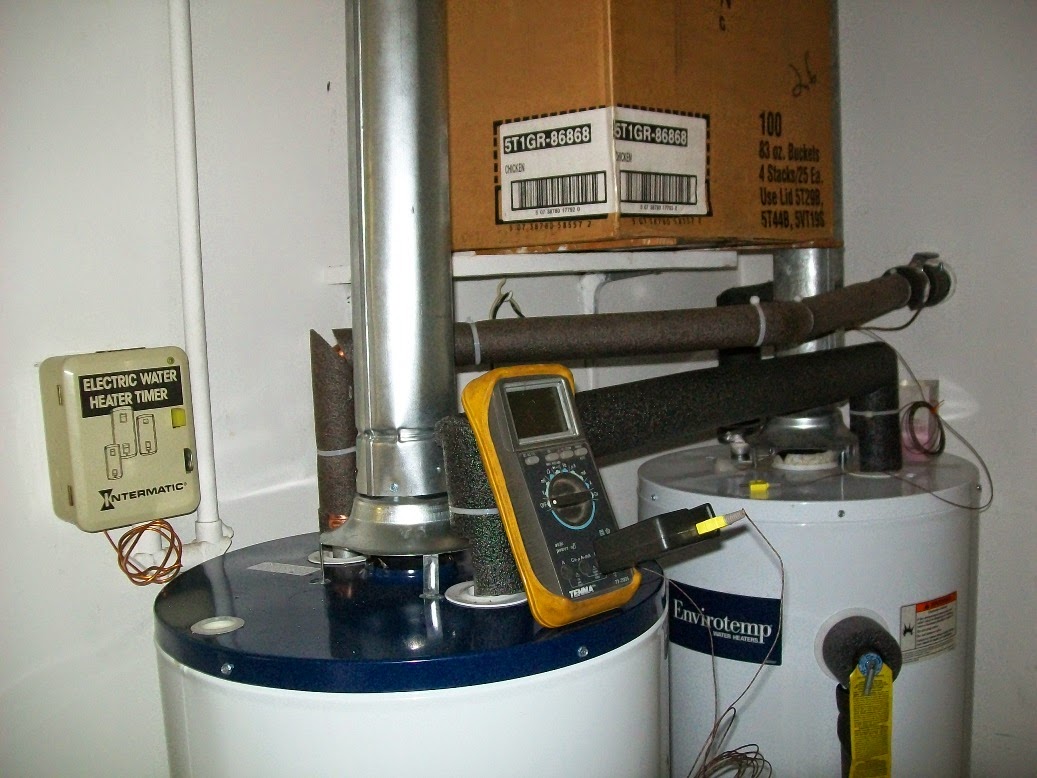 The preferred temperature was achieved with each thermostat set just above the corresponding scales’ midpoint.  I’m comfortable with that.

Here’s a face-off of new & old thermostats.  The new Honeywell is at the left connected to the yellow gas line. 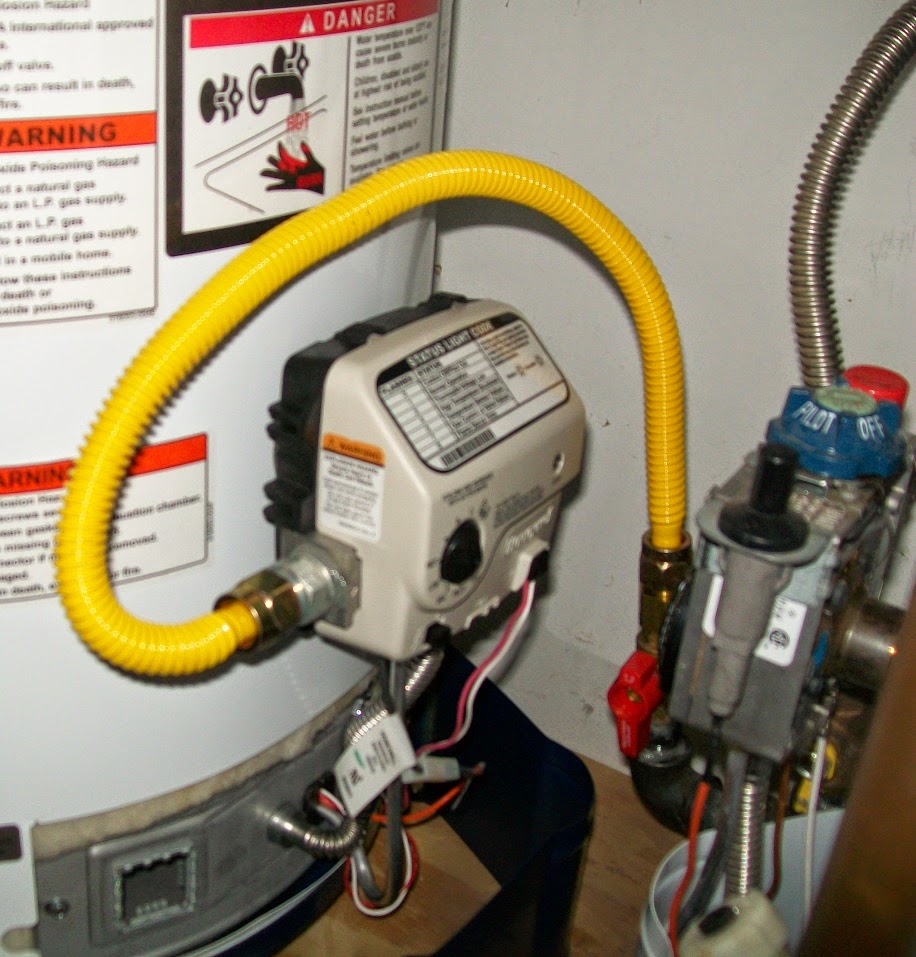 So far, so good.  I think my oldest boy tried to run out all the hot water the other morning.  The only thing he succeeded at was doing a good imitation of a steamed lobster.

Hopefully, the next winter-time power bill will finally be lower than the gas bill!