…Let there be LED Light 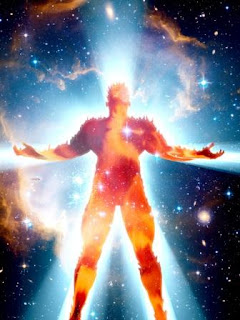 From time to time people ask me my view on upgrading Vintage Airstream light fixtures to the low energy, LED-based fixtures many RVs now come with. My response is always some variation of “If you plan to boondock much, LED lighting is great for conserving battery power. My family however does not camp without hookups, and I have yet to find an unobtrusive new fixture I want to buy. I will stick with my present incandescent lighting. If nothing else, I have a lot of frosted 1156 bulbs stockpiled as spares.”

It looks like I am going to have to change my tune, though. Not because we’re about to start boondocking, but because the heat from the bulbs is cooking the inferior light switches being sold today.

The 37 year-old bathroom & kitchen sink light switches were all but shot when I got my Overlander, and were replaced with new, special, 3-way switches from an Airstream Dealer before the maiden voyage. Within a year, the remaining three overhead light switches showed signs of checking out, and the Dealer got my Visa card number again.

Last season, which would be six years later, the “new” bathroom switch started flaking out, and the search for a suitable replacement fixture was intensified. Once again finding nothing appealing, I started looking at multiple LEDs packaged on an 1156-style incandescent bulb base with a plan to keep the existing fixtures, and replace the hot incandescent bulbs with cooler LEDs. After a little surfing, PPL in Texas was found to offer just what I was looking for: 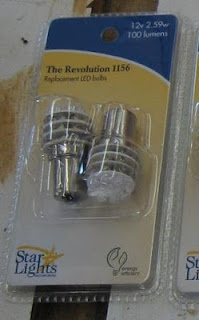 For Phase IA enough packs were ordered to replace the bulbs in the bathroom, kitchen sink, and exterior scare light fixtures.

I still needed a light switch for the effort, and was not really inclined to call Airstream again. Vintage Trailer Supply now offers a switch which will work, but they are very up front on their site that the original knob (which looks like the knob on a dimmer switch) will not fit their product. After consideration, I emailed VTS with my tale of the short-lived light switches from Airstream, and asked if they had confidence their offering would last longer. “No” was the short answer.

After a few beers, and deciding use of the original knob was important, I opted to call Airstream again. Knowing the shipping & handling charge was going to border on unreasonable for one item, I opted to go ahead and order a new kitchen exhaust fan motor because the old one was driving my wife crazy with its inability to spin at a constant speed.

A week or so later a small box with a postmark showed up at my door, and I wished I’d had a few beers before opening it. The switch was the exact one VTS now offers, and my credit card had been charged $18 S&H for a two-pound box. At least the motor was what I was expecting. 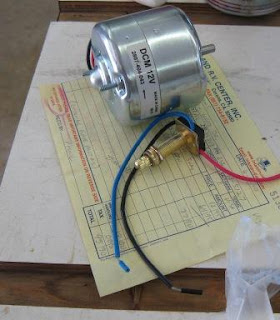 Until the newly outfitted fixture was turned on with the LED bulbs installed, I don’t think I have ever seen LED light filtered through a lens before. The type of light radiating from it made me think I was looking at a skylight. Here’s a before & after picture: 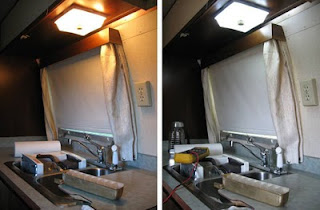 Unfortunately, I thought the exterior scare light was also an 1156, but it turned out to be a double-element bulb. So that gave two bulbs instead of one for Phase IB.

These Airstream switches are special in that the first click of the knob turns on one bulb. The second click turns on three bulbs, and the third click lights all four bulbs. For now, two of the remaining three overhead light fixtures will each get one LED bulb place to light on click one. Here’s one of those fixtures with one LED & three incandescent bulbs lit (note original knob): 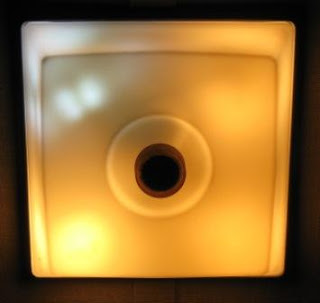 I may run in that configuration for a while because the light from one bulb suffices most of the time, and Phase II, replacing ALL incandescent bulbs with LED bulbs will cost a lot of money. In the meantime, holler at me if you need any frosted 1156 incandescent bulbs. They’re yours for the cost of shipping.