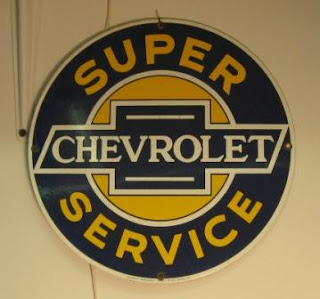 “Super”, on the sign that hangs in my shop, is supposed to be a modifier for “service”. But during the last round of work on my ’84 Suburban its use as my made-up acronym more suitably described what it took to rid my primary tow vehicle of an intermittent problem which started last year.

The engine developed an occasional miss, flutter, or backfire-through-the carb near the end of last camping season, and I thought the problem had subsequently been fixed by a partial carb rebuild. But during Memorial Day’s 1000 mile round-trip towing the Airstream to the beach, the issue appeared to still be with us.

The usual suspects like plugs, wires, and cap & rotor had been replaced no more than two years ago, and at a casual glance still looked new. Although the timing had been checked during the same activity, the procedure is so easy & unobtrusive to do it seemed stupid not to re-check it.

In a nutshell, to check timing a strobe light connected to spark plug wire #1 “freezes” a mark on a spinning wheel. The mark’s location can then be referenced to a gauge fixed to the engine. Here’s a representative image which shows the wheel, its mark, and gauge: 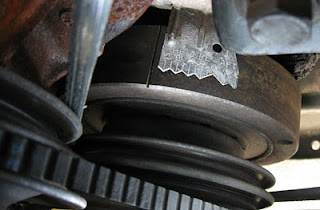 So after 30 seconds of setup, the strobe light was pointed to the wheel & gauge, and… no mark. Hmm, surely the strobe must be misconnected. Nope. Tried it again - No mark. After triple-checking everything failed to deliver joy, the strobe’s connection was moved to different spark plug wires. When connected to wire #7, the mark finally showed up.

Although I had a suspicion of a possible cause, the issue was posted on two different forums to see if the Internet’s cadre of problem solvers might be able to point me to a simple solution I had overlooked. In the meantime, efforts were refocused to address a problem with a deteriorated driveshaft carrier bearing noticed when the Burb was on the rack getting new mufflers a while back.

The bearing itself was okay, but the rubber supporting it had seen better days. While the assembly was easy enough to disconnect from the Suburban, getting the carrier bearing off the shaft was not. The hope was that a few sharp hammer blows would be sufficient. But it ended up taking a hydraulic press to both remove the old bearing, and install the new one. 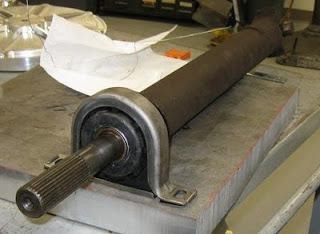 While I felt better about having the part installed with its new rubber & all, the Mighty Burb did not feel any different going down the road. My time may have been wasted on the effort. But the fried grits side-item made for dinner that night lifted my spirit. 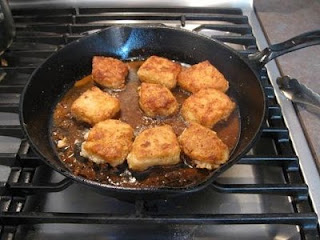 Checking the computer the next morning, most of the Internet’s misplaced timing mark gurus suspected the engine’s Harmonic Balancer’s outer ring (the spinning wheel mentioned above) had slipped at the rubber interface. I wanted to agree, but the Burb’s HB showed no evidence of having slipped, and this particular part is a chore to remove because of its location, and the fact that special tools are required for the effort. But the only way to know for sure was to compare the balancer with a new one. Fortunately, the auto parts store was willing to loan me the special tools needed.

Below is a picture of the old & new harmonic balancers:

The timing marks for each, located near the bottom, are marked with white paint. The unit is keyed to the crankshaft via the slot in the center hole. Notice how the slot on the RH unit lines up with the timing mark whereas the LH unit’s slot is roughly 135 degrees away? The Suburban’s HB had slipped, and it had slipped a lot.

So a new harmonic balancer was installed, and after many hours of reassembly, the timing could finally be checked. It checked within spec.

At this point, the only pleasant memory after $100 worth of parts and a week of downtime is a plate of fried grits. I had hoped for more.

To be honest, at this point, I was inclined to take the truck to a Service Center. But since the first thing they would do is a tune-up, I figured I could do that again, even though the parts to be replaced had not been installed long enough to go bad.

The distributor cap & rotor are easy enough to remove, inspect, and replace only if necessary. Modern-day spark plug wires, while easy enough to remove, usually break internal to the boot during disconnection no matter how careful one is. Spark plugs for this engine are cheap enough that it is stupid to screw the old plugs back in. So I headed off to the parts store with a short list which included plugs, wires, and fuel filter.

Auto parts stores annoy me on occasion with their myriad selection of individual part “quality”. Most of the time, all I want is what General Motors originally specified for the part. Consequentially, there are some parts I will only purchase from GM. But the parts store’s computer never indicates which one of the line items corresponds to OEM.

In what was no surprise, the store offered two different flavors of spark plug wires, “regular”, and “super-duper”. In the past, I had always bought “regular”. But even though the wires were not really suspect, something moved me to ask for “super-duper” this time, and while he didn’t say anything, it appeared to surprise the man behind the counter. I laughed when he brought the box out – the top of it was covered heavily with dust. The parts man smiled and shared that people rarely request the super-duper wire set.

Back at the truck, as suspected the cap & rotor checked out fine. As expected, seven of the eight spark plug clips broke off inside the boots during boot removal, and the plugs looked fine. What was not expected, though, was the condition of the spark plug clips on half of the wires, and a hidden tear on boot #8. An arsenal of smoking guns had been found, and they were all plug-wire related.

It appears the wires and been poorly crimped onto some of the clips and had been arcing inside the boots. Note how clean the upper clip is in the picture below, and how sooty the interior of the lower clip is. 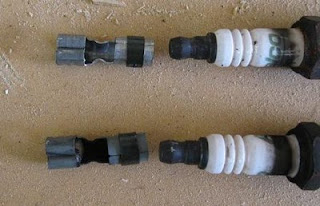 But I am stupefied as to what happened to boot #8. This type of damage could easily allow the spark to arc to the heat shield. 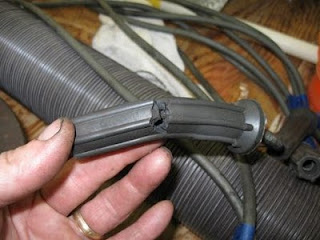 My plans to do spark plug wire resistance checks were scrapped in light of these discoveries. To wrap up the activity, the fuel filter was replaced, and the old one autopsied (no issues).

It looks like the new super-duper plug wires have cured what ailed the Mighty Burb. It’s been my daily commuter for the past few days, and hasn’t missed a lick in spite of some aggressive checkouts. Ya gotta love SUPER Chevy Service.