This past weekend was a busy one for Daniel and me. We tent-camped in one State Park, and then drove to a different State Park over in the next county so Daniel could play his cello in concert, and then drove back to the first park for more camping. After all that driving, though, I was finally able figure out what had been making the Suburban run rough over the last few months.

Friday afternoon, Daniel’s Scout Pack got together for two nights in the no-travel-trailers-allowed section of Guntersville State Park. While most of the tent-camping gear needed for the adventure was still in its big Tupperware box, a few items did have to be retrieved from the Overlander. One item though was purchased new – an air mattress. Sleeping on the ground is getting less & less fun as I get more & more old. 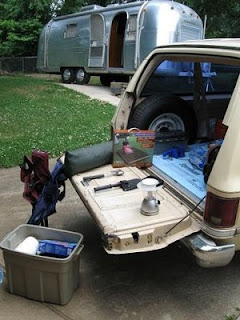 The Mighty Suburban is always the transport of choice when a campground is involved. Its roomy, no-nonsense interior is perfect for hauling gear or for sleeping when the tent floods. In fact, we gave up on water-repellent tent sprays & seam sealers which never seemed to work when we figured out it is far easier to hop into the back of the Burb when the weather gets unusually rough. Luckily, on this trip we had a very good weather which a good turnout of Scouts enjoyed. 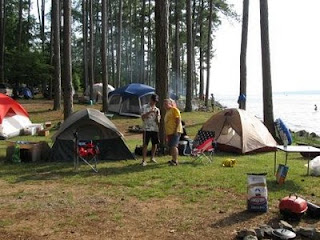 Friday afternoon was centered on playing in the Tennessee River, and was capped with hot dogs roasted over the campfire. 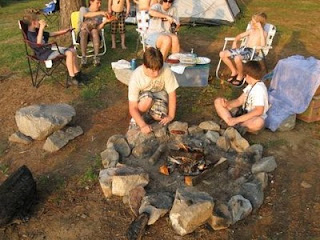 Saturday morning, we had link sausage and pancakes cooked on the Coleman stove before heading over to Montesano State Park’s amphitheater for an outdoor strings concert. Daniel’s seated to the right of the conductor in the image below. 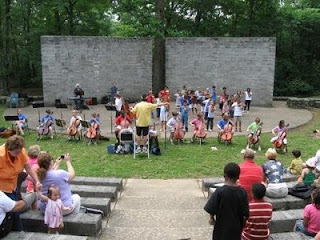 The kids sounded great, and everyone appeared to enjoy their effort. Then it was back to Guntersville for more swimming & canoeing.

Later in the afternoon, several of us went geocaching - a treasure hunt of sorts which requires walking through the woods with a hand-held GPS guiding the way. This was the first time, with the exception of the man who led it, that any of us had ever been geocaching. The Scouts were thrilled to swap items in the waterproof container, and note their presence in the cache’s log book. 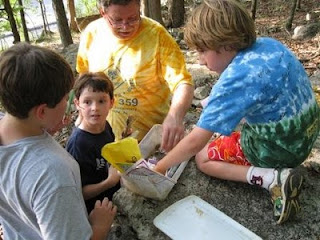 No Scout campout would be complete without peach cobbler made on a campfire in a Dutch oven. Mr. Andrews was quite proud of how his effort turned out. 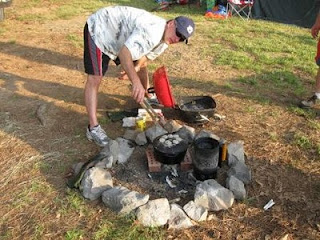 Grilled burgers wrapped up the busiest day everyone had had in a while, and looking around at all the mildly sunburned campers, I figured most would probably hit the sack a little earlier than usual.

The plan on Sunday had always been to get up & pack up, and eat breakfast on the road. There was no particular rush to get going though, and I decided to let Daniel sleep until he woke up. 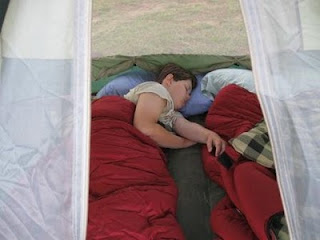 Unfortunately for him it started sprinkling rain around 7:30. In an effort to wake him gently, I let the air out of the mattress. No effect. I ended up rousting him awake when it started raining harder. What a zombie! Since he obviously would have benefited from a little more shuteye, I guided him to a chair while the camping gear was loaded. Luckily, the 15 miles which separated us from our Cracker Barrel destination gave him time to wake up.

For the past six months or so the Suburban’s motor has had an occasional stumble on the open road that I could not put my finger on as to the cause. The standard tune-up items are not that old and the stumble did not always occur under the same conditions. Oddly, it seemed to stumble less when the Airstream was being towed. During the course of all the driving Daniel & I did this weekend, I was finally able to tie the symptoms to a specific part of the carburetor to check. So the Mighty Burb got to cool off at my shop door while we unloaded the camping gear. 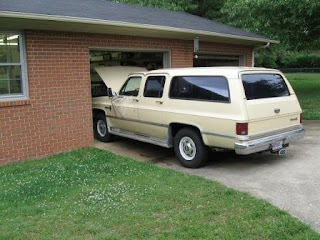 One thing that puts the “mighty” in my Suburban’s pet name is the Rochester Quadrajet carburetor it uses to mix gas & air together. Considered by many to be the finest high-CFM carburetor ever made, it makes a really cool sound when all four barrels are open under heavy load. It is also one of the last mass-produced automotive carbs made before the auto world in general moved to fuel injection.

While the primary goal was to evaluate the condition of the fuel float and needle valve & seat, I also wanted to check out the condition of the secondary enrichment system because, independent of the current problem, I had noticed a consistent, brief lag in performance when the secondaries opened. The truck had this issue before the carb was rebuilt in ’97, and the problem was found to be two, internal brass tubes which had vibrated loose from their mountings. 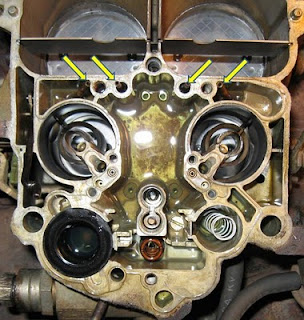 The float and needle valve each appeared to be okay, but the needle valve seat (orangish/brown circle in picture above) had some wear on it. My notes from the last rebuild indicate I had replaced the float, but no mention is made about the needle valve & seat. So a new needle valve/seat combo was ordered from O’Reilly auto parts – one of the few local places which consistently does well at getting parts for my vintage tow vehicle.

In the meantime, the four loose tubes were re-staked with gas-rated epoxy: 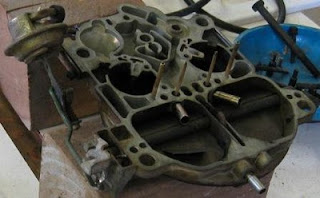 Concluding this work should return the Mighty Burb to top form. The clock’s ticking on check-out though because we’re headed to Tybee Island Georgia over Memorial Day with the Airstream. I think we’ll be ready.