Big Tub Gets a Shade 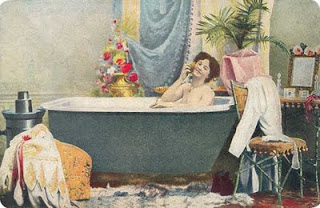 Several years ago we added on to our house in an effort photo logged as Project Big Tub. While the actual construction had its ups & downs, living in the new space since then had been carefree until around six months ago when new neighbors moved in across the street.

Tom and Annie are really nice people, but part of their security plan involves leaving both megawatt front porch lights on all night, and most of the light was finding its way to our bedroom through Big Tub’s four-foot-square, glass-block window. A window covering had never been planned for that location primarily because the glass blocks distort possible viewing from Peeping Toms (present company excluded). Additionally, opening or closing the covering would involve crawling up & over Big Tub, and neither Kim nor I were real motivated to do that every morning & night.

So after we finally had enough of trying to keep Big Tub’s door closed to keep the light out, Kim got a local, window treatments company’s representative to come over one evening to outline options. In what made the selection process easy, there was only one option: a motorized, pleated shade controlled by a switch, remote control, or home automation system via serial communication, relay or RF signal. It could be battery-powered or hardwired. Since regularly replacing batteries is not my thing, I opted for the hard-wired option. If nothing else, running wiring constituted doing it the hard way, which is the way I appear to do everything.

While the vendor would have done a complete installation had this been new construction, the only thing they offered to do in this circumstance was to hang the shade after my designated electrical contractor had done all the wiring. While frustrating, this was not unexpected. So Kim had them measure the window, and signed us up for a packaged deliverable which included the correctly-sized shade, wall switch, 24 VDC power supply, and a spool of appropriate hookup wire.

After designating myself as the electrical contractor, the first plan had been to run the wiring underneath Big Tub. But remembering the bathroom’s rooftop gable, a framing close-out photo was pulled out of archive to see what, in addition to the header, could be a potential wiring obstacle. 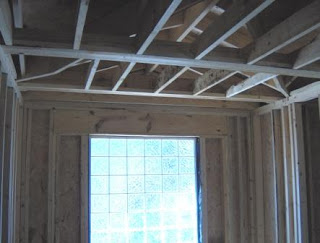 Space was limited - Between the gable rafters being framed close to the joists, and the height of the joists’ ledger beam, fishing a wire into the main attic did not appear to be an easy task. But it was doable, and wiring through the attic still had more appeal than crawling under the house.

So I whipped out my trusty, 18 inch ship auger bit, and hoped no nails were in its path. 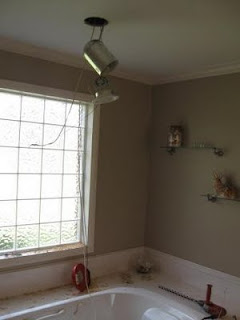 The first hole in the top of the window frame was a success. But of course, the wire fished no further than the bottom of the roof decking over the hole.

Fortunately, the can light over Big Tub itself had been assembled with screws instead of rivets, and could be disassembled & removed from its mounting frame for access to fish the wire over to the main attic. To my chagrin, after the can’s removal, no insulation fell out of the hole. Apparently, that small area was inaccessible to the guys who blew the insulation in during construction. I will have to address that at some point. But not just now.

The switch was mounted in the master bedroom immediately before the bathroom door. If we should someday get super lazy & decide to get the optional remote, this placement is ideal because the switch assembly has the remote’s infrared receiver. We could open or close the shade without ever leaving bed. Notice how many wires/connections there are on the switch? 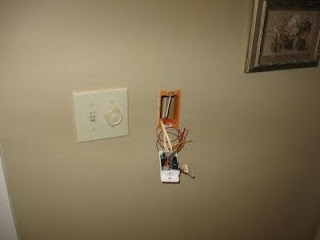 The last hurdle was deciding where to put the 24 VDC power supply. Mounting it in the attic did not seem like a good idea because the power supply’s case, which resembles the power supply to a laptop computer, did not look like it could take the summer heat. Then I remembered the doorbell transformer – It is hidden in the top of the hall closet, and has 120 VAC running to it. So after closet wall modifications including the addition of an outlet, and a transformer shelf, the shade now had the right kind of power. 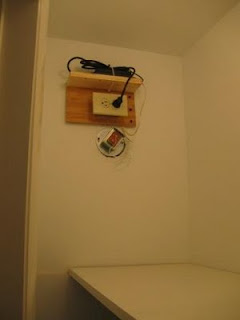 I could have painted the new wood, but it seemed like overkill for the unseen side of a coat closet. Plus I really don't like to paint.

In a really neat father-son moment, my nine-year son wandered by about the time the shade was ready to be lowered for the first time. While he knew I was up to something in the room in which he likes to swim, exactly what I had been doing had been, up to that point, had been perceived as “Dad’s tinkering with something…again.”

“Hey Daniel! Watch this!” I then bzzt two wires together, and the shade came down. The look on his face was a Kodak moment. 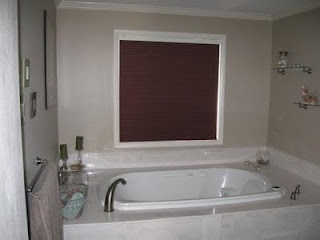 The wires were then bzzt again, and the shade went back up. I will not soon forget the “Cool!” look on his face.

Subsequent testing with the completed installation was also successful. Upon her return from participation in a five-family yard sale, Kim too was quite pleased with our bedroom’s new light blocker. And, there appears to be no need for a remote or home automation system - The Boyz now fight over who gets to raise or lower the shade.