Back during George H. W. Bush’s administration when Kim & I were just starting to get to know each other, she was over at my house one day, and I caught her casting what appeared to be a disapproving look at the card table & chintzy chairs which were gracing my kitchen’s dining area. I laughed and explained that my long range plans included replacing the ensemble with a 48-inch round, white oak table & matching chairs. At present, though, its acquisition had yet to bubble up to the top of my “high-dollar list of things to buy”.

During the subsequent chit-chat, wherein Kim noted that she and girlfriend Alicia, while out-and-about, had noticed a vendor at the Limestone County Flea Market was selling a new, locally-produced version of what I had just described. Deciding to go for the Brownie Points, I expressed interest, and bumped a new table & chairs up on the list. By the following weekend, my bachelor kitchen had new furniture.

After many subsequent years of great meals, spilled food, and pages of kids’ homework, the table’s finish started showing its age, and was moved last week to my shop for refinishing. 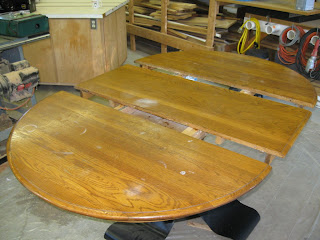 While the table’s white spots and sporadically missing finish were one thing, the major annoyance was the gummy feel the finish was getting. Although good for holding plates in place, the surface’s stickiness made flipping through a newspaper or magazine tough. Other than the feet being beat up a little by constant mop attacks, the pedestal’s finish was, overall, still in good condition. One theory is that all the dried drops of milk & dog slobber on it had formed a protective coating. 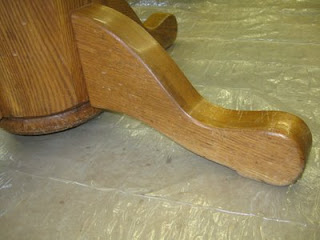 Meals got a lot cozier during the project. Kind of nostalgic too – That’s my pre-Kim kitchen table we’re eating on. 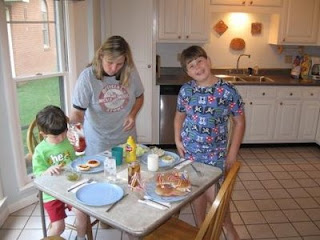 As I had met, and talked shop with the man who had built my table when I bought it, I knew that the table had a urethane, as opposed to polyurethane or varnish or lacquer, finish. Generally accepted as tougher & more durable than other finishes, a cured urethane finish requires a special mix of chemicals to remove it. Surprisingly, after running an inventory check, I found that my shop had sufficient amounts of everything necessary to strip & refinish the table.

Normally, lifting an old finish with chemicals is kind of fun. Brush the stripper on, wait until the old finish wrinkles under the chemical assault, and then remove the old stuff with a plastic putty knife. Detailed/curved surfaces might take more time. Urethane was found to be a new ballgame – It never wrinkled. In fact, it really never came off. After copious amounts of timed chemical application it softened, but still stuck like grim death to the substrate. After almost a gallon of stripper, about 70% of the finish was still on the table. 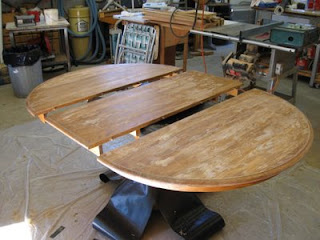 Fine. In spite of adequate ventilation, the chemicals were giving me a headache anyway.

After cleaning up the chemicals’ effort and allowing the table to dry, I pulled out my trusty random-orbit sander, and armed it with an aggressive 60-grit sandpaper to finish the coating’s removal. 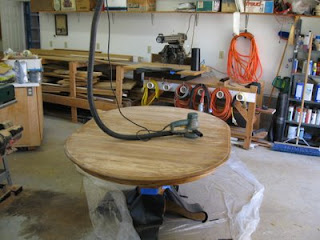 After an appropriate amount of aerobic activity on my part, the old finish was still intact... and shinier! It now seemed like the urethane was laughing at my efforts to remove it.

Well, me and Mr. DeWALT don’t like to be laughed at. 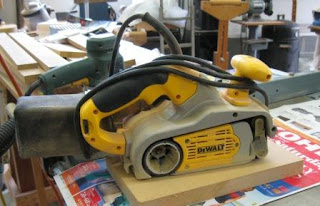 Even with the experience gained through wearing out one belt sander, I think hard before using this particular tool because it can very quickly ruin even a wood as tough as white oak if not given 100% attention during operation. However the urethane ultimately proved to be over-matched, and was but a memory in a very short amount of time.

This brute force belt sanding was then followed up with progressively finer grits of orbital sanding until a small section wiped with mineral spirits revealed no scratches. 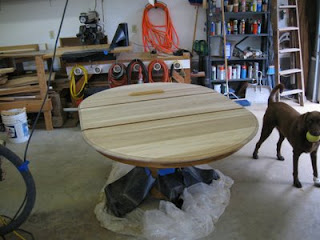 All the raw wood was then wiped with Golden Oak stain. 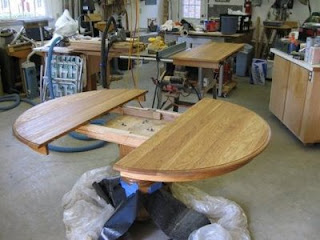 The pedestal was then disassembled, and the component parts were cleaned with mild soapy water before being scuff sanded. 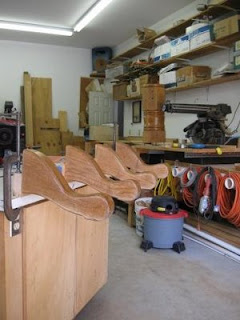 For really big jobs, the boat bay gets converted into a spray booth. But, between this being a small job, and urethane’s amazing ability to self-level & float out brush marks, I decided to brush the finish on in my shop. Granted, what with the sawdust & all, a workshop is not the best staging area for applying clear finishes. Inside the house would be better. But, if left alone overnight with the doors closed, the shop’s air does clear up. Plus, keeping the effort in the shop precluded anyone from whining about the smell.

The first of three coats of spar urethane was applied one morning before the sun came up, and set up without a hitch. The second coat, applied late that afternoon, had, to my great annoyance, cured with tell-tale brush marks visible. 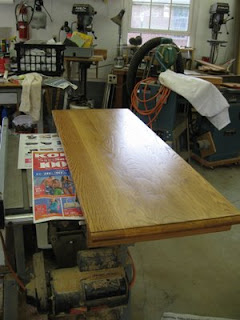 Nothing hideous but, then again, nothing I wanted to live with either. I had always had great success with the urethane family of finishes. Why had the second coat not cured-out better?

The weather. Once I thought about, it dawned on me that most of my woodworking projects are accomplished in the Fall when the weather is cooler & drier. Here lately, the daytime temperature has been around 90 degF with the relative humidity around 74%. Since urethane cures in the presence of water, and heat accelerates curing, I just considered myself lucky that everything turned out as well as it did. Live and learn.

So after 220-grit sanding the brush marks out, the whole shebang was moved inside to Tom’s Room where the Man of Steel could keep an eye on things. 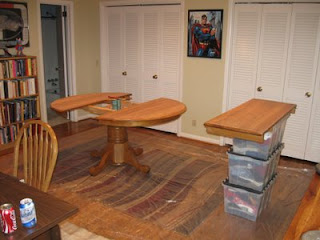 That was the ticket – The third coat floated out flatter than Kansas. 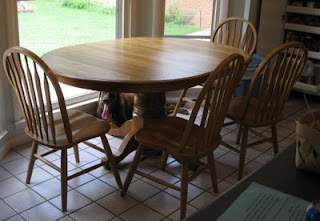 I can comfortably declare that we are good for at least another 16 years.