Near the start of this year, the local paper ran a story about the renovation of DeSoto State Park near Fort Payne, Alabama. Recalling that Kim & I had enjoyed tent camping near there years ago with our Sunday school class, I mentioned to her that it would be great to check out the improvements sometime during the summer with the Airstream. Since the campground is now taking reservations, Kim scheduled us to enjoy Independence Day there.

The pool was, as usual, an instant hit with the Boyz. 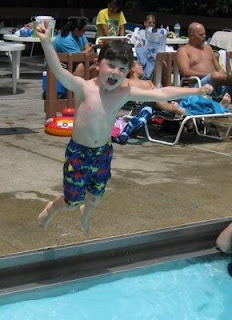 While not exactly “Olympic-sized” as billed, it is a large and surprisingly nice pool. Being spring-fed, it was quite cool too. 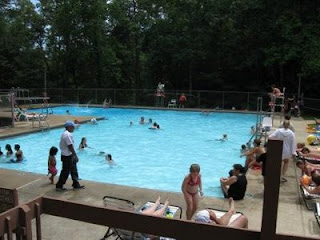 Whoever scoped out the campground’s renovation did an excellent job with the effort as the important things like utilities, bathhouses, campground loop surfaces, etc. had been addressed quite well. The campsites themselves were packed with fine gravel which made them suitable for tent or trailer camping. Concrete had only been poured where it was necessary to control drainage.

Our site was huge, and had plenty of trees for both privacy and ambience. 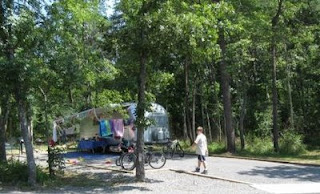 There was even enough room to set up the Putt-Putt golf course number 2 son had received for Christmas. 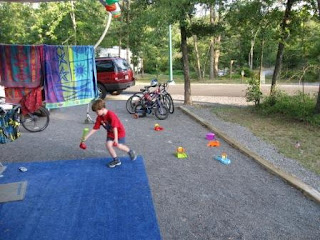 On a campground, when not hiking, swimming, biking, et cetera I generally like to stay busy doing one thing or another. That’s just the way I am. But, last season, I found myself wanting to, on occasion, just sit there and both enjoy being outside, and watch the passers-by. The thought of reading a book for pleasure, as it is something I have not done since BK (Before Kim), also kept popping into my mind.

The problem was that I had had no where comfortable to relax for extended periods. Sitting on the Overlander’s gaucho was not an option since it is indoors, and the Boyz were usually already there watching TV.

While the Suburban always provides us with canvas folding chairs, ya can’t stretch out in any of them. What I needed was a lounge chair… like my dad had long ago. 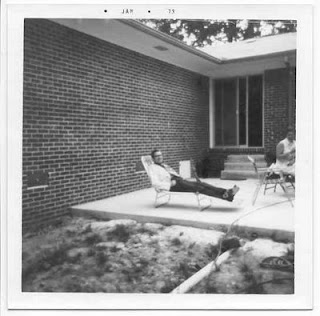 Even though I haven’t seen it in awhile, my folks probably still have the one Dad’s sitting in above and I thought about asking them for it. But, after 36 years, I kinda doubt the plastic mesh is still good. After a local search, it appears that style of lounger is not made anymore (at least according to Wal-Mart’s shelves). I ended up having to buy a not-really-portable, upgraded version, with cushion, which is nice enough to leave out on our patio 24-7.

Although buying a chair is, in itself, innocent enough, none of this desire for a comfy chair was discussed with my wife because I remembered her mentioning long ago that one of her campground memories of her dad was of him being sound asleep on his lounger. Pick any camping trip, and the memory was the same. Seemed to kind of annoy her.

Well, the new chair was one of the first things unloaded simply because of the way big things were packed in the Burb. When Kim & the Boyz wandered over to check it out, I immediately started my spiel about wanting to take some time to read a good book, and yada yada yada and that this is MY chair. Each of you already has a chair. You will sit in your chair and I will sit here. Although I could tell by the look on Kim’s face exactly which childhood memory had bubbled up, she played right along and reaffirmed to the Boyz what I said.

In what was an unfortunate twist for him, Number 1 son ended up being the first lounger. While taking a bag of garbage to the dumpster on his bike, he dropped a wheel off the side of the road and wrecked big time. His right knee got bloodied pretty bad, and his left leg bruised. Luckily, his helmet did not look scratched. But he had sucked it up, got back on his bike, and completed his chore. I was so proud of him; I wanted him to recuperate in comfort. 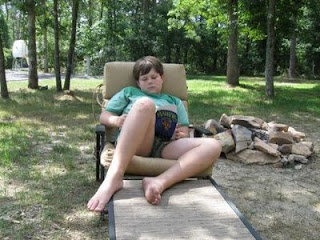 Luckily, young people recover fast, and the next day we were ready to hit the hiking trails. 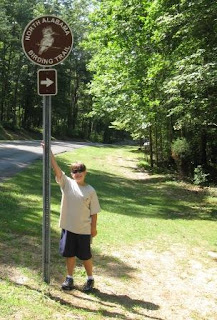 One thing that I did not know about the Desoto State Park grounds is that it contains a dam constructed in 1925 to provide the first hydro-electric power produced in Alabama. 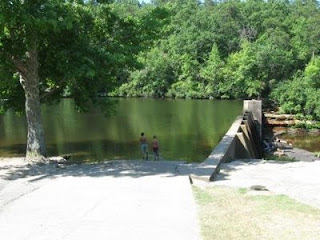 Even though North Alabama had record setting rainfall back in May, not much has fallen lately, and below the dam was fairly dry. 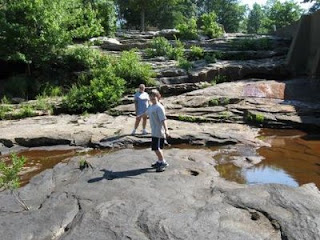 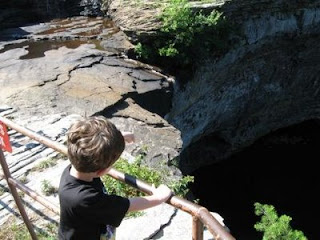 When we last visited, the Falls had been in full glory, and a good portion of the day was consumed with hiking down & back to explore behind the falls. Unfortunately, barbed wire now prevents visitors from doing that. Since there appeared to be a lot more residences in the area than either of us remembered, it’s possible that a private individual might now own the former hiking path’s land. Kind of sad if true, but it could also be that the State just decided there had been too many hiking accidents and closed the area.

Another interesting sight in the area is an old, active Baptist church whose construction was integrated into an existing, huge chunk of rock. 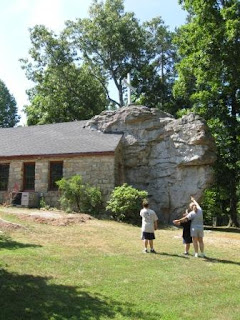 While really cool to look at, Kim and I both laughed when I figured out we were both thinking, “I’ll bet they are constantly chasing leaks when it rains”.

After doing just enough hiking & sightseeing to be fun but not grueling, we returned to the campsite to rest up before going back to the pool. Apparently, I should not have stopped inside to get a cold drink first because, when I went back outside, I found someone who had already forgotten whose chair is whose. 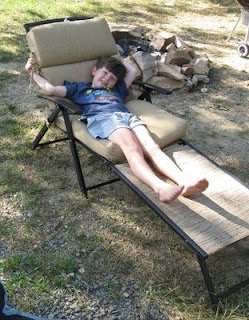 Since I wasn’t really ready to sit or lounge, the time seemed right to go on bike patrol to see if there were any other cool-looking trailers camping at the park for the holiday weekend. As luck would have it, I found another Airstream not too far away. 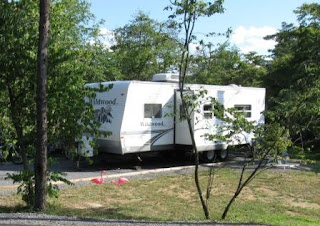 While I’m not familiar with this particular model, it must be an Airstream because Airstream owners are, I’m told, the only ones who camp with pink flamingos.

When my brother, sister, and I were growing up, comfortable seating in the den, where our family’s one television was located, was somewhat limited. First-come, first-serve. Leaving the room during a commercial was a problem because the ‘leaver’ would invariably come back to find someone in his/her seat. Since bickering generally followed, a rule was set and ascribed to that the leaver had to first declare, “My seat is reserved” if he/she wanted it back upon return. This rule-of-order worked amazingly well.

The television nowadays, what with computers and all, is not the focal point it once was, and we have plenty of comfortable seating in the den. Not so at the campground. Guess who forgot to reserve his seat? 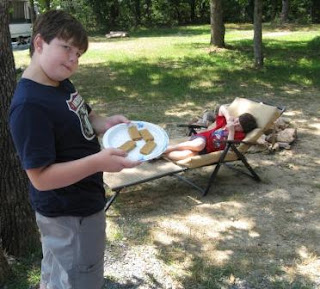 Since Kim’s folks live reasonably close to where we were camping, and her Dad’s birthday is one day short of our country’s, we decided to invite them & her brother over to the park for a birthday cookout. Due to the number of people to grill for, I opted to bring the Weber grill, and use the campground grill to stage the Coleman stove to cook up bacon for Kim’s famous baked beans. There is nothing like the smell of bacon cooking at a campground. 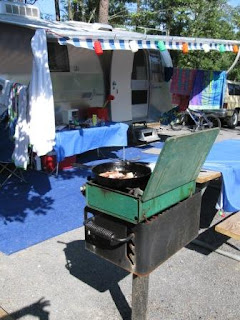 The weather remained great, and the burgers were enjoyed by all. 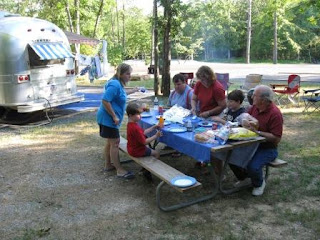 Surprisingly, Kim’s Dad opted for a regular chair for the post-dinner chitchat & smores.

In what was a really neat touch, the Park Ranger, in celebration of our Nation’s birth, had set up a mini parade of emergency vehicles to run the campground loop with sirens & lights a-going. Many children were following behind on bicycles with red white & blue streamers. The Firemen & EMTs tossed out hard candy to all the kids on the route. Afterwards there was an ice cream social at the pavilion. 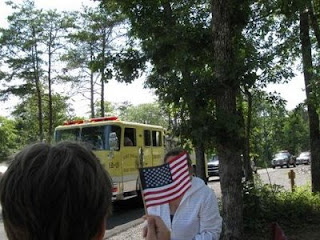 I’m not much of a sweets eater, so it aroused no suspicion from anyone when I opted to stay at the campsite instead of partaking of the home-made ice cream. Kim did, however, notice my ulterior motive when everyone got back. 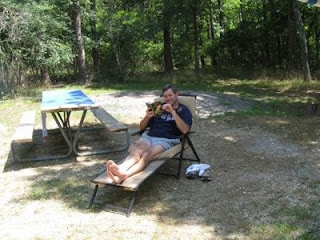 The morning of our departure welcomed us with a steady stream of rain. Since the Boyz wanted breakfast on the road, and enjoy traveling in their pajamas, I opted to break camp after sun-up without waiting for the rain to subside. No big deal because I needed to get back & check on the ‘farm’ anyway. It ended up raining the entire way home.

Good thing we got back when we did – The watermelon had broken out of its patch. 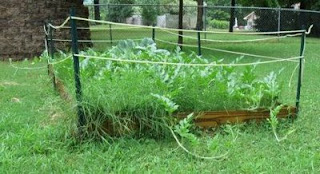 Everyone agreed that DeSoto State Park would be added to our “Let’s go back there again” list of places to visit. We thoroughly enjoyed visiting.