Every so often, I get a wild hair to plant a garden, and borrow a roto-tiller from family or friend, instead of renting one, to till up the ground. While this approach has worked out fairly well, I really don’t like to borrow gas-powered equipment for a variety of reasons, and have kept an eye out for a good used tiller. Since I used to really enjoy working on small engines, to keep costs down the hope was to find a tiller that needed some level of repair.

A week or so after the start of the New Year, my friend Kenny asked me if I was still looking for a roto-tiller. From a previous conversation, I knew he had picked up one some time ago at an estate sale with a plan of fixing up & selling it. After getting a few more details, I decided he had made a New Year’s resolution to lighten the number of projects he had at his house, and the tiller was one of them.

Kenny told me he had cleaned out all the old gas to get the tiller started only to have it die & not re-start. In the brief time it ran, he also noticed a bad bearing on the transmission jackshaft. Between these problems, and wanting to show his appreciation to me for resolving a computer problem he had had, Kenny made me a great deal on a 1982 Lazy Boy model 5-RT, rear-tine roto-tiller made by the Parmi Tool Company. 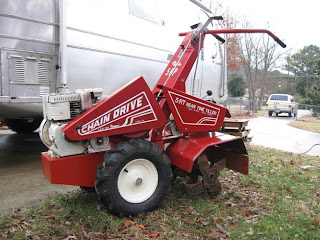 This thing is a hoss. Weighing in at around 200 pounds, its 5-hp Briggs & Stratton engine powers a 20 inch rack of 12 inch tines, and rotates the 16-inch drive wheels via a transmission with three forward speeds and a reverse. Being as old as it is, the machine is blissfully unencumbered by today’s safety-mandated litany of safety interlocks – This machine will till the operator into the ground if an appropriate amount of attention is not paid to the task at hand.

To troubleshoot, I disconnected the spark plug wire, and held it in my hand while pulling the starter cord. No ouch. The grounding wire to the throttle lever’s stop position was then disconnected. No change. After finding nothing visibly wrong with the coil or its distance from the flywheel, the points & condenser were now suspect.

Oddly, the flywheel had no tapped holes for a removal tool. No problem, though, because a piece of angle iron drilled to accept carriage bolts fished out of the spare parts supply worked just as well. 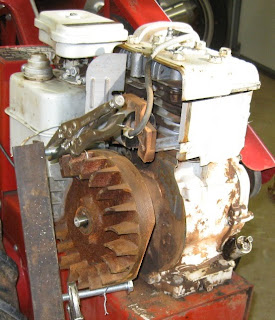 It did not appear anyone had had the flywheel off recently. The points looked okay, but the gap was really big. So big, in fact, that the points never made contact. After checking the capacitor with an ohmmeter & dressing the contacts, the point gap was reset to 0.020”, and everything reassembled. Slowly pulling the starter cord this time, I got mildly bit by electricity.

After reconnecting the wire to a cleaned plug, the engine started up after two or three pulls & ran for about five seconds, and then quit.

My “calibrated hand” told me there was still electricity coming out of the coil, but not enough to arc a gap. To verify, another spark plug was gapped to 0.010”, connected to the wire, and left on top of the engine. The engine was then spun by a drill motor. No spark was seen. The points were verified to still be opening & closing. It appeared the coil was bad. But Briggs & Stratton’s FAQ tells me the coil’s secondary circuit resistance should measure between 2500 & 5000 ohms. My coil measured 2800 ohms.

After talking with some of the guys at work, by the end of the day I had convinced myself that the coil was indeed shorted, and that it would be stupid to not install SSI. But on the way out the door I ran into Bill, and he asked what my latest project was. I had no more than said “garden tiller” when he seemed to kind of light up and interrupted to ask “Briggs & Stratton?” After I nodded, he went on to describe my engine to a T, and outlined ways to improve its performance.

Apparently, around 12 years ago he was ‘Mr. Go-cart Racer’ before having to give it up to save his marriage, the B&S five horse was what he ran. While agreed that installing SSI was best route, he disagreed that my coil was bad, and proceeded to share a few war stories on coils he had run which had considerably less secondary resistance than mine.

Although the old points & condenser could have been left in place, the kit came with a plug to install in place of the cam follower so I decided to pull out everything to add to the spare parts box for future projects. Now for the punchline – The screw holding the pivoting point in place had backed out in the five seconds the engine had run the previous day because I had neglected to torque it down. It did not come all the way out, but the point was at an odd angle. First mistake I have ever made…

While this was probably the problem, oddly though, according to my ohmmeter, the points were still making & breaking. Part of me wanted to reset & reassemble to see if the problem was fixed. The other part of me said “Why bother? You’ll just have to disassemble again to install the new electrical part that cannot be returned”.

After the tiller started on the second pull, attention was shifted over to the bearing issue Kenny noticed while the engine ran out a tank of gas. The symptom was that a V-belt which connects the jackshaft to the transmission would not stay engaged on the pulley. 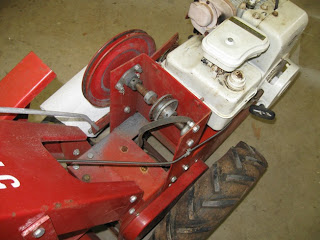 One of the two pillow block style sintered iron bearings was wallowed out, and the other one did not look that great. Fortunately, the 5/8”D shaft was still in useable shape. 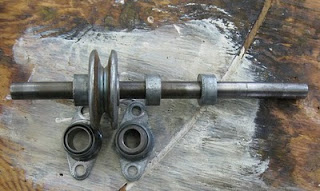 From past experience, I was surprised to find sintered iron used instead of the commonly-accepted-as-better sintered bronze. While it would have been nice to ask the Parmi Tool Company about the material choice, they were absorbed by another company long ago, and parts & advice for the Lazy Boy 5-RT are no longer available.

Unfortunately, none of the local small engine parts stores had a replacement bearing for sale. One online resource offered a bearing for a very reasonable $11.33 that would work, but new mounting holes would be required, and I have a thing about not drilling holes in vintage equipment.

Taking another look at the worn out bearing, I noticed it was made by Triangle Manufacturing Company, and Mr. Google told me they were still in business. In a lucky bonus, it was found that Triangle offered both the original sintered iron bearing, and a sintered bronze version. Their $30 minimum order requirement was not viewed as an obstacle because I would have been more than happy to pay $15 a piece for two OEM bearings. But I got tickled when they quoted me $1.05 each for the iron bearing, and $3.16 each for the bronze. Since I was still researching the merits of the different bearing material types, the minimum order requirement allowed me to buy a lifetime supply of each type.

To keep this post as dry as possible, shown below is a bearing comparison. From left-to-right: really worn-out iron, new iron (with magnet stuck on as proof), slightly worn iron, and bronze: 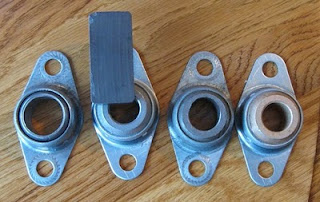 Research into why my tiller had what I considered to be less desirable bearings continued during the three or four days it took for the new bearings to arrive. “Economy” is, I believe, the final answer. Iron bearings are a third of the cost, and while not as “good”, the ones installed in my tiller did last for 29 years. From a design standpoint, my tiller’s record is hard to debate. But, as seen below, my newest tool’s jackshaft is now supported on bronze pillow block bearings (the old iron ones are shown for reference). 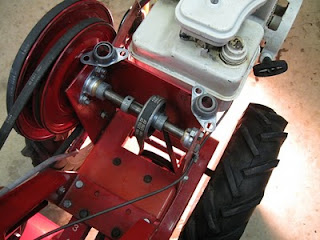 While it is still the dead of winter here, all maintenance/checkout/stress tests short of actual ground-breaking have been completed; the tiller is declared ready to go. While the fun I had restoring this vintage tool to operation to me pays for the costs involved in doing so, fiscally speaking, for what I could rent a similar workhorse for, I need to get 2.23 rental days out of my antique machine to break even. Not counting my Mom’s potential requests, that requirement will be met with this spring’s tasks. Since the modern-day-replacement equivalent cost of this machine is roughly $2700, money is projected to be saved.

The only thing that could make the whole setup better would be Number 1 son looking as happy plowing our Victory Garden as he does in the image below. 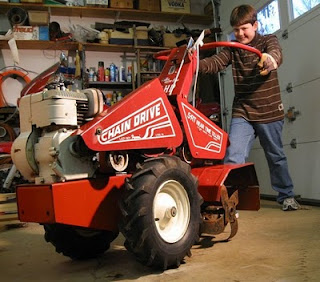