Early Start on This Year’s Garden

For quite some time, I have wanted some blackberry bushes because of fond memories bicycling long ago around the undeveloped Sharondale subdivision collecting wild blackberries. While looking at vegetable seeds at Lowes the other day, I noticed the store was also selling fruit bush, rooted cuttings (bushlings?). Taking note of what they had, I returned home empty-handed for follow-up research.

After reading that most of the Internet agreed now is the time in this area to plant berry bushes, a strategy for placement & spacing was mapped. A day or two later, I stopped back in and purchased two each of the blackberry, blueberry, and raspberry offerings.

Since part of the area chosen for the orchard included my watermelon patch of a couple of years ago, I decided to till the planting zone with the vintage rear-tine tiller I got recently instead of just digging six holes. Plus, I was dying to check out the tiller in actual operation.

The first use of the new tool ended up being more of a workout than expected. My experience with garden tillers up to this point had been with front tine tillers, and I had developed a reasonable experience base of the amount of continuous muscle power required to control that variety. But I was thrilled to get a rear tine tiller in part because of the manufacturer’s propaganda of people sweatlessly tilling a field with only one hand gently guiding the machine. 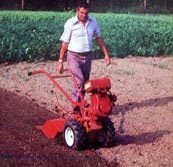 Well, I found out the hard way that that only works after the hard pack is broken up. I had the depth gauge set too deep to start with, and the drive wheels could not get traction before the tines dug in and had me chasing the machine as it fled the designated till area. My upper body muscles were plenty pumped before realizing that this style of tiller has to be handled differently finally hit home. But after the top inch or two of soil was broken, the effort got considerably easier, and several subsequent passes in the desired zone were made to end up with about a foot of deep-tilled soil. 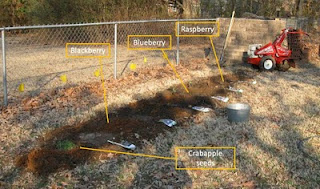 The crabapple seeds pointed to are part of an effort started last fall, and are planted in a [buried] terra cotta pot for easy transplanting if/when they germinate. That’s hardy grass growing in the pot.

As long as the dog doesn’t chew the stuff up before the thorns can grow, hopefully I will be posting some cobbler/pie recipes in a couple of years.