Just before Christmas, a new desktop computer & Netbook were ordered just before discovering the dishwasher had conked out. After tracing the dishwasher’s primary problem to a bad heater element, a $100 parts kit was ordered. When the box arrived a week later, I was surprised to find a new, master dishwasher computer included as part of the approved repair package. No wonder it cost so much. 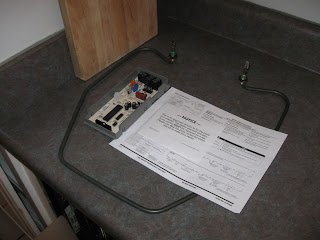 Around the time the Netbook arrived a week later, Kim happily commented that the dishwasher was cleaning the dishes better than it had ever done before. I guess everyone should change-out their dishwasher’s computer every so often for the latest version of clean.

The Netbook was an instant hit with everyone. Right out of the box, it powered up & immediately sensed our house’s wireless network. After typing in the security key we were off and running. Or at least Daniel was – he was the primary user for the first few days.

Daniel took it with us on a visit to Kim’s parents’ house to show them a roller coaster video on YouTube. While the Netbook was booting, his grandmother told him they did not have a wireless network. He looked at me, and I told him to see what’s out there anyway. Sure enough, five or six of the neighbors’ wireless networks showed up, and two of them were unsecured. 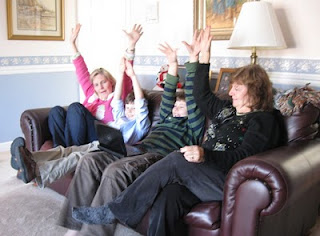 Our house’s Ethernet router combines wireless and hard-wired connectivity, and was bought when Kim started bringing home a work laptop computer. In time, though, her employer disabled the laptop’s wireless capability out of security concerns. So after the house was hard-wired for Internet connectivity, the wireless part of the router was seldom used.

Between the new Netbook and Daniel’s DSi, it sure gets used now. 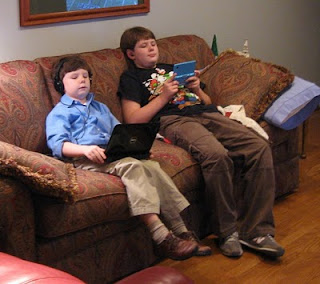 About a week later, the new desktop computer & monitor arrived. While it is always neat to get a new & faster computer, one part I always dread is the tedium of moving files from one computer to another, and installing software on the new computer. This time was worse because Daniel knew my old computer was trickling down to him. As a result, he constantly hovered where I was working with a “aren’t you done yet?” look on his face.

Eventually the last file was moved, and the old computer set up in the playroom with a temporary Ethernet wire strung across the wall. With each boy listening to their computer via headphones, it was just harmony central. 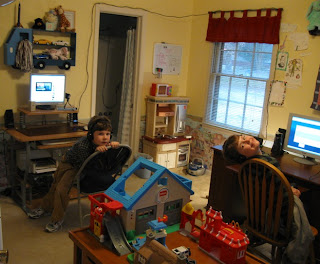 Knowing Daniel was to get the computer, Mrs. Santa found a new, color, combo scanner-printer locally for the ridiculously low price of $20. While Daniel didn’t necessarily need a scanner, we figured it was better to leave the inkjet printer the Boyz’ computer originally had connected to the machine now designated as Jared’s.

While Daniel was most appreciative of the new printer, he casually mentioned he would not mind having the capability to also print to our laser printer. It struck me as odd until it dawned on me that he would save a lot of ink if his print jobs consumed our toner instead. He just grinned when I shifted the conversation to that slant.

When we only had two computers in the house, each machine had its own printer, and connection to the Internet. No network was set up for the computers to share files or printers. Now with four computers, four printers, and a terabyte backup drive, it made a lot of sense to establish a home network. It became somewhat necessary, though, when we found Kim & Tom’s scanner was too old to work with the new computer – Plans are to use Daniel’s remotely at least until after the Christmas bills are paid.

Normally, setting up a home network is no big deal – Just follow the screen prompts at each computer designated for the network, and connectivity magically occurs. But in this case, the four computers involved used two different versions of Windows, and extra steps would be required. I felt up to the challenge, though.

To my great GREAT surprise, no one on the Internet had ever heard of my exact situation. After two days of addressing the problem, one of my countless “what if?” scenarios finally bore fruit and a simple re-configuration had Daniel sharing files & printers with everyone else on the Network. All is now well. 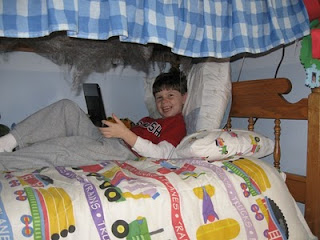