No Menu For You!

A Sony Betamax machine needed to finish an earlier digitizing effort was finally located, and incredibly, for its age did not need any repairs before use. Like most people, I was vaguely aware at the time that the Betamax & VHS videotape formats were rivals in the days of the home videotape recorders. This was only the second time, though, that I had ever been around a Betamax machine, and was surprised at how similar-in-size it is to a late-model VHS machine.

The tape cassette, though, is noticeably smaller than the VHS’s. 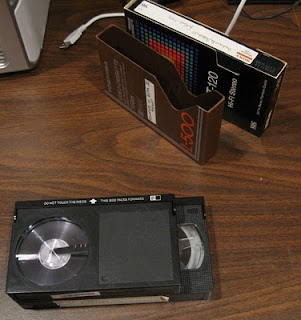 In a ‘small world’ kind of thing, The first time I saw a Betamax was in the early nineties, and the one I saw then might just be the one I have now. My Uncle Les was a gadget guy and one day he left a Betamax at my house for someone else to pick up. Although he passed away around five years ago, I was told that a lot of his stuff was still stacked neatly in the garage. So I emailed my aunt with a general description, and over Thanksgiving, one of my cousins located what I had described, and gave the Betamax to me at the big meal.

Other than not having stereo sound, the machine hooked right up to my digitizer, and after fine-tuning the picture, the analog version of the 1978 Contest of Champions recorded in Murfreesboro, TN was on its way to digital preservation.

For this effort, it seemed best to create an opening menu for the DVD so that the performances of the eight marching band finalists and judge’s decision could be easily skipped to. Although it should have been a simple task, the exercise ended up being a slow study in frustration.

In the past, Roxio brand CD/DVD editing software has worked well for all the audio CDs burned over the years for various projects. The 2008 version of the software currently loaded on my four year-old computer claimed to have the ability to do everything the present task required. But for some reason, the MyDVD function would not encode a video DVD correctly, and that particular function was necessary to create menus.

Roxio’s web site offered no help for the broken function other than a price cut for upgrading to Roxio 2011. Countless versions of freeware & shareware were subsequently downloaded from other sites, but for various reasons, none of these Internet offerings were able to do the job. So, although it chafed me, purchasing the Roxio upgrade appeared to be my only option.

Big and slow. The upgrade took forever to download and almost as much time to install. Continuing the theme, it takes forever to load and/or do anything. Everything this version does appears to require a lot of CPU time, and “Program not responding” is Windows Task Manager’s usual description of how the program typically accommodates my mouse clicks. 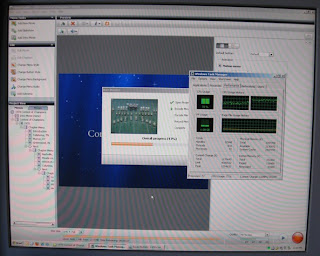 Normally I wouldn’t be so negative about a product. But my annoyance meter is still registering high because, after all the time & effort expended, I still don’t have a DVD with a custom-made menu. It appears my computer is too old to run the resource-hog software being sold today.

Since I won’t let this go for some reason, a new computer has been ordered, and should be here in the next few days. Hopefully, my next post will have a cheerier tone.