A couple of weeks ago, a high school friend pinged me on Facebook to see if I could convert some old films & tapes from our marching band days to DVD. As I am always open to new challenges, I asked her to send me what she had, and I would see what I could do. A few days later, the postman brought a box containing eight, Super-8mm reels of silent film, an audio reel-to-reel tape, and a Betamax II cassette. 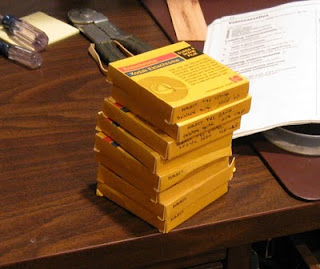 The audio tape to CD conversion was effortless because I already had both the required reel-to-reel deck & software, and the experience of having done it before. 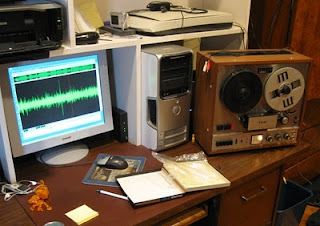 Although I had access to my dad’s old 8mm projector, it would not work with Super-8mm film. So I started asking everyone I could think of for the loan of a projector, and Betamax machine. Fortunately, a co-worker had a Super-8 projector he didn’t mind loaning out. But he warned me it needed a new light bulb.

Unfortunately, it needed more than just a bulb – The main drive belt had disintegrated.

I used to spend a lot of time repairing machines which needed new belts, and knew that finding an exact replacement belt was going to be slow, and expensive. But I also remembered the short-term fixes, and after a trip to the refrigerator’s vegetable drawer, a red celery band was pressed into action to get the wheels moving again. 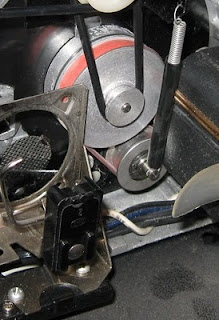 The light bulb was a problem. Not for availability, but for cost. A local camera shop wanted $35 plus tax for the ENA-style bulb, and the Internet was only five or six bucks cheaper. Now, part of the goal in this project was to keep the cost as low as possible because this is supposed to be a one-time effort. I could have bought a new bulb, but for only 400 feet of film, it seemed prudent to investigate other options. If nothing else, the man who loaned me the projector had no plans to ever use the device again, so I had no qualms about returning a projector which still needed a light bulb.

Dad’s film & slide projectors used different style bulbs than the Super-8 machine, and could not be swapped out. But, out of curiosity the two film projectors were set up to see if the light from Dad’s projector could be recycled. 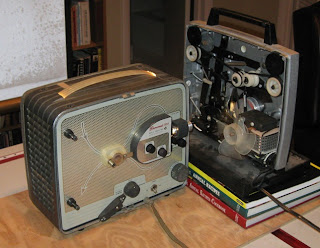 No – the resulting image was too dim. The Super-8’s bulb was rated at 80 watts. So a 90 watt spotlight was rounded up for the second effort. 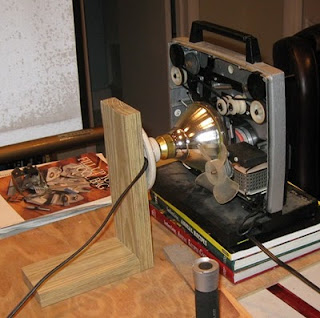 Still no joy. Apparently the proper bulb’s claim to fame is its ability to focus a lot of light in to a small opening. Both of Dad’s projectors used optics to focus the bulbs’ light into a small area. So effort #3 found me holding a four-inch diameter magnifying glass between the spotlight and projector’s light aperture. But there is no joy in Mudville — mighty Casey has struck out.

Returning to the dugout, I started researching what all kind of devices use an ENA-style bulb. Eventually, something cross-referenced to an overhead projector, a machine which used to be very common where I work. Overhead projectors, having now been replaced with computer-controlled LCD projectors, are all but extinct nowadays. Good thing, too because it seemed like every time I needed to use one, the bulb was blown out. Fortunately, there were always replacement bulbs available. Hmm.

A check of the supply cabinet at work the next day found 11, spare, ENX-style bulbs gathering dust.

While physically extremely similar, ENA and ENX bulbs have very different power requirements. The Super-8 bulb was rated 80 watts at 30 volts. The overhead projector’s bulb consumed a blinding 360 watts at 82 volts – way too much heat & light for the effort; the film stood a chance of melting if the bulb was used as-is. So the setup was modified to include a Variac, and supplemental cooling fan. 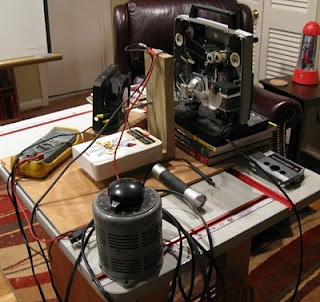 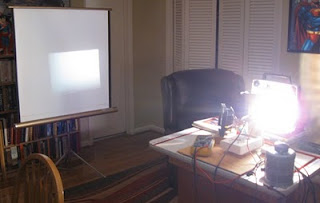 I’d like to thank Anheuser-Busch for contributing to my effort. 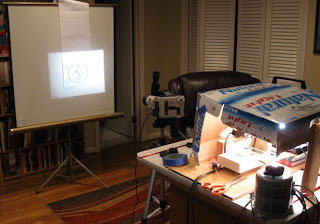 With the projector squared away, a borrowed video camera was set up to catch the action, and then wired to my computer via a digitzer. Then I sat down to watch & record eight, four-minute clips of the THS Marching Band. That’s me on the screen in the white shirt, fourth from the right. 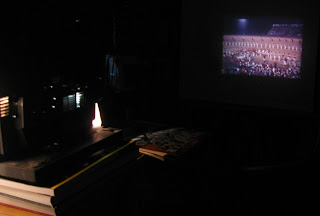 For as old as the home movies are, the color has held up well, and none of the film broke (or burned up) during the viewing.

The first problem with my setup was noticed during the first reel, and there was not a no-cost option available to resolve it - The projection screen surface is contaminated. Oddly, the dirt (or mildew) only shows up when the screen is hit with bright light, and I could not come up with a non-destructive way of cleaning the 50 year-old fabric.

The second problem was the quality of the image processed by the video camera. All the film had been shot a night, so it was a little on the dark side to start with. While I knew some resolution was going to be lost by the whole process, between that loss, and additional darkness added by the camera, the digitized video did not turn out as well as hoped for. Compressing the videos to fit YouTube made the issues even worse.

But for a virtually no-cost trip down memory lane, the effort was worth it, and saved my friend from immediately spending the $160 someone on the Internet quoted to do the conversion.

Fortunately, the audio tape turned out phenomenally well, and its wonderful sound helped offset the video disappointment. Hopefully the Betamax tape will turn out well – the search for a suitable player continues.