Much to my wife’s chagrin, I like to conclude our Airstreaming season with a cold-weather adventure because there is nothing more peaceful, to me, than sitting in front of a campfire in the fall. Kim relents because she knows the Airstream has a robust gas furnace to keep us warm at night.

For a variety of reasons, Tims Ford State Park in Tennessee was chosen as the last scheduled Airstream outing of the year. Although it is only about 70 miles from home, Daniel & I decided to take a half day off Friday to set up camp. Kim & Jared followed later in the afternoon.

The Park is only about 15 miles from where I grew up, so my parents found time to motor over & enjoy the first fire. 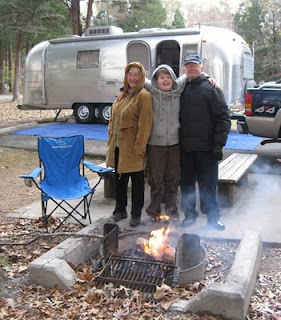 The first part of Saturday was taken up with walking the trails. Although the lack of rain over the summer diminished the fall colors, we still enjoyed the natural beauty of the area. 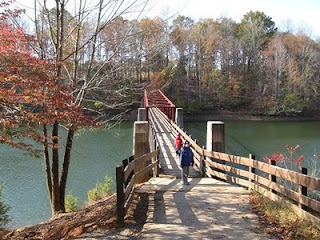 It was nut season at the park. The hickory nuts caught my attention because I had just spent a lot of time with Google Images identifying a tree in my yard. The two hickory nut varieties found during the walk, and pictured below, were subsequently identified as Shellbark and Pignut, respectively: 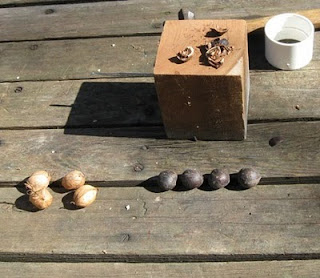 My friend Dan, who was raised on a farm, laughed when shown the picture later and remarked on the appropriateness of the darker-colored nut’s name.

While Jared was okay with the walk, he was pleased to see the Park had installed new playground equipment since our last visit. 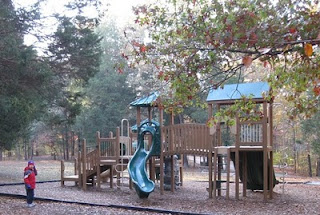 Although the campground was not deserted, there were very few other campers, and the Boyz had the roads & trails to themselves. 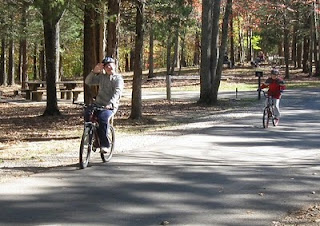 Other than the walk on Saturday, I parked myself at the fire, and even nodded off a few times in spite of the cold. At one point Daniel joined me… with his DSi. While my preference would have been that the game stayed home, I knew that everyone was tolerating the weather just for me, so I didn’t complain. 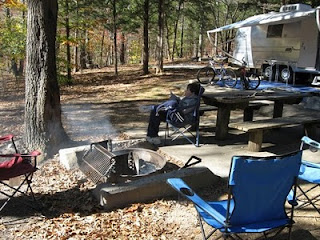 We shook up the meals menu this trip, and other than lunch-time hotdogs, the fire was not used for anything else. Oddly, everyone appeared to forget we had s’more fixings.

We packed up Sunday afternoon and headed over to my parents’ house where other relatives had already gathered for a birthday celebration. After that, we headed home.

The Overlander is now winterized. But hope springs eternal that some fun event will pop up between now and next season.