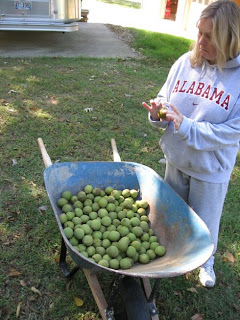 Many years ago, I was weeding a garden bed, and pulled up a plant still attached to the pecan from which it grew. Thinking it would be really neat {insert flashback to my carefree youth running about the pecan groves in southern Georgia} to have a pecan tree in the yard, the three-inch tall plant was carefully re-potted and placed where it could be easily watered. But within days, the squirrel who had buried the nut in the bed reclaimed it, and I was left with nothing.

My mom told me not to worry about because she was all the time running across pecan saplings in her garden, and promised to bring me one at some point. Some period of time later, she made good on her promise, and presented me with a six-inch sapling which was promptly planted in a corner of the backyard.

All was well for a couple of years until both Aunt Bron and Mother both were visiting, and Aunt Bron expressed strong reservations about the tree actually being a pecan tree as the leaves didn’t look quite right. She leaned more towards it producing hickory nuts when it was old enough. I decided to not worry about it, because ultimately the idea of a nut tree, any nut tree, was okay with me.

In time, the tree started producing nuts, but never that many, and the squirrels hauled them away before I thought about looking at one closer. This year, though, the now 20 foot tall tree was all but overrun with nuts, and last week the nuts were starting to drop on the ground. So it seemed like a good weekend project to finally harvest the mystery nuts.

O’dark thirty Saturday morning, though, found me firing up the Brinkmann to smoke a 12-1/4 pound brisket to feed the company coming over for supper. 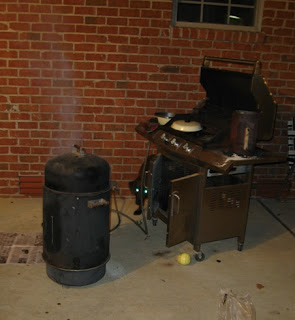 But after the sun came up, Jared and I got busy picking up nuts. 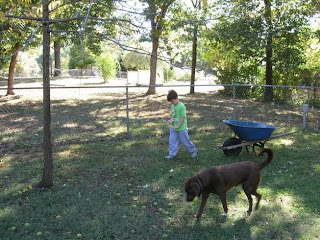 Between Google Images & Wikipedia, the tree was finally determined to be a Black Walnut. UC’s publication 8005 agreed now was the time to harvest, and advised me to remove the husks, and let the nut inside dry for a while. The publication also reminded me of what I already knew in the back of my head that walnut juice will stain hands. So after a trip to the store for rubber gloves, I got busy cutting the hulls off. 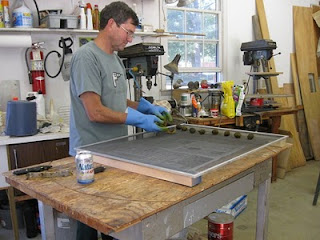 Between fiddling with the smoker, reading up on nuts, and finally moving the brisket to a 250 degree oven to finish, time was running short on getting the cornbread salad and bread made for the rest of the evening’s meal. So I took a break from hulling and returned to the kitchen.

Cornbread had been made before the brisket claimed the oven, and was cooling before the next step. Bread was next, and I chose to use milk instead of water to get a softer crust. 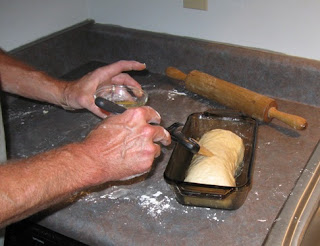 One nice thing about having an Airstream in the back yard is the extra oven available when different dishes need different cooking temperatures. So the bread was allowed to double in size out in the Airstream while the vintage gas oven preheated. 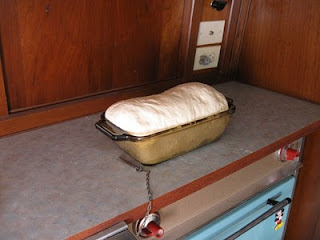 The Magic Chef oven does a good job with bread. 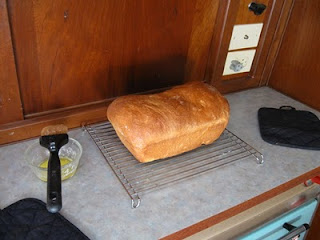 The brisket turned out looking good in spite of having to be cut in half to fit in the smoker. I’m sure some of my Texas friends could do better, but the crowd liked this one. 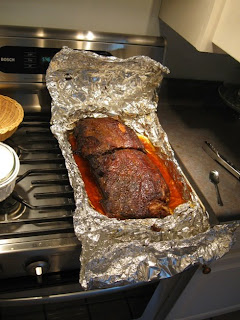 Before the afternoon was out, the rest of the walnuts were hulled, and left to dry in the sun. 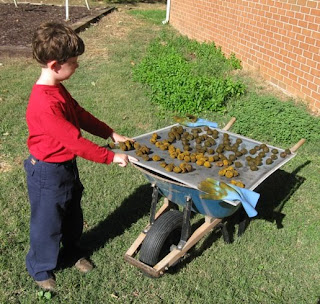 My friend Dan advised me to pressure wash the nuts after a day or two to get rid of more hand staining chemicals. Up to this point, the nuts had been drying on an old fiberglass window screen which I knew would not stand up to a pressure washer. So a sturdier screened box was made out of 2X4s and rabbit wire. 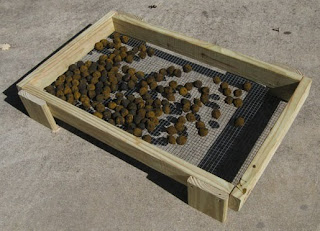 Here’s the harvest after a go-round at the quarter car wash. 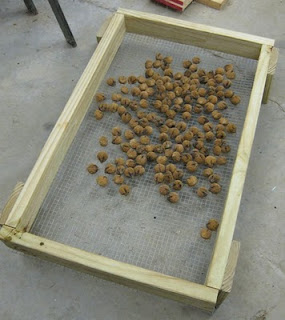 Dan also advised me to let the cleaned nuts dry for a while to allow the meat inside to pull away from the shell. So the brownies will have to wait a little longer.

By the way, I didn’t give up on having a pecan tree in the yard. About seven years ago I found another pecan attached to what I initially thought was a weed and Daniel & I transplanted it to another home. This one I kept inside the house. 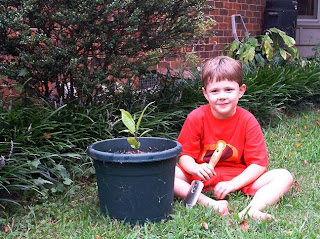 The tree was subsequently moved to the front yard around the time we were building Project Big Tub, and is now around 11 feet tall. 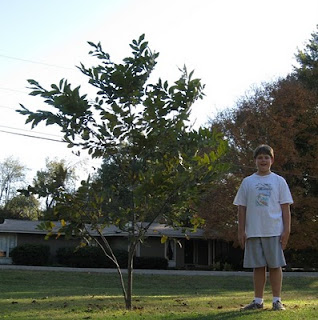 Pecan pie & walnut brownies! If only I ate desserts.