Crabapple – The Next Generation?

The first house I lived in as a married man had a rather sickly looking crabapple tree in the front yard. As I had fond memories of growing up with a crabapple tree in the front yard, the hope was that the tree’s health would improve so I would once again have fresh crabapples to... I don’t know. The neighborhood kids & I used to eat and throw them at one another. While there’s nothing like eating an occasional crabapple, I don’t think Kim would much like getting hit by one.

My dog at the time was Buddy, a male pit bull mix, and soon after moving in, part of his routine after being let out of the backyard was to run up and pee on the crabapple tree. At first it bothered me because the tree was probably thinking, “Here I am at death’s door, and look how I’m being treated”. But as time went on, that silly tree actually started looking better. By the time we sold the place, it actually added curb appeal.

I was thrilled when our next/present house was found to have an established crabapple tree in the side yard. Although many people at the time advised me to thin the water sprouts & crossed branches, I did nothing other than trim low-hanging branches. My “do nothing” approach appeared to work well until a few years ago when the tree just did not seem as happy & healthy as it used to. Buddy was no longer with us, and our present female dog Cookie appeared disinclined to follow in his footsteps.

But this year was different. I don’t know if it was due to the unusual weather or what, but the tree both looked good, and produced the most crabapples I have ever seen it produce. 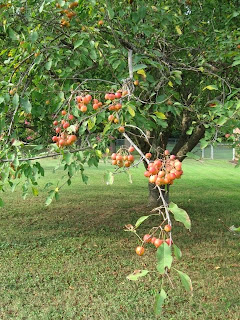 Big, plump tasty ones too. I thought about collecting a few pounds of them, and making a jam or something. But before I could get serious about it, Kim told me she heard a strange noise one night, and looked out to see deer eating crabapples off the lower branches. Deciding that feeding wildlife was a better use of the harvest, my culinary intentions were dropped.

But what if this was the ‘calm before the storm’? The tree is obviously fairly old, and I started worrying that it might have put its energy into one last effort to produce seeds since the end might be near. I’ve read that pine trees do that. So I picked a couple of good candidate crabapples up off the ground, and planted a whole one in one cup, and a halved one in another. The cups were then planted in the front flower bed.

Not more than two days later, the fruit was gone – some varmint had looted the bed. 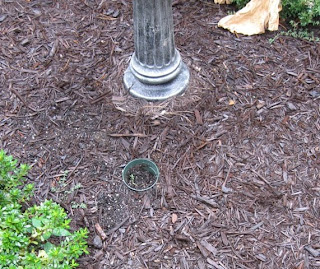 While annoyed, I was not necessarily surprised. For the next effort, though, I researched how Johnny Appleseed accomplished his goal, and discussed options for my next effort with a noted middle TN Master Gardener (my mom) to ensure the next planting had a reasonable chance of survival. 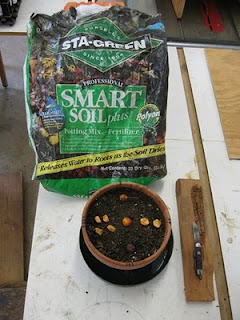 Five crabapples of different states of ripeness were collected for round II. One was quartered, another was halved, and the remainder left intact. The differing pieces were then buried at various depths in a terracotta pot of special mix. A few years ago, birds ate up all the watermelon seeds I planted in the ground before the seeds had time to germinate. Deciding the best approach was to start the seeds in individual containers & transplant later, special precautions were taken to protect the seeds. 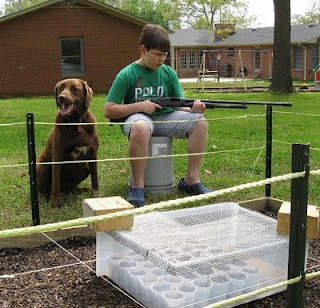 It worked, but seemed like a little overkill. So the level of physical security was lightened for this effort. 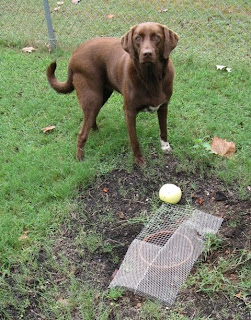 With cold weather approaching, there’s no guarantee the seeds will germinate this season. While I could move the pot inside and hope it gets regular watering, the plan is to leave it in its hole in the backyard, and keep an eye on it. The cool thing about the setup is the elevation – Cookie should be able to help the seedlings out should they appear distressed…