Glancing through the paper the other day, a filler article reminded me that TVA would lower water levels in different reservoirs on the Tennessee River after Labor Day to accommodate winter and spring flooding. The information in itself was nothing new because they’ve always done that since most people around here consider Labor Day the end of boating season. “Flooding”, though, got my attention.

Looking out the kitchen window, I remembered when this idyllic scene: 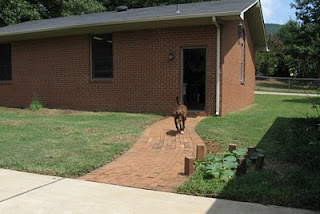 Looked even worse than this: 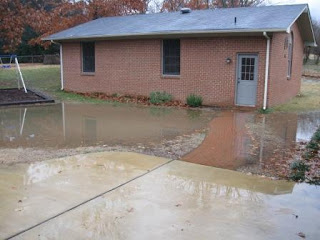 Starting early last year, Alabama has been getting more rain in every season for the first time since we added onto the house around three years earlier. Until early last year, I had not realized how much the house’s addition changed the rain’s existing drain path. Previously, the backyard drained down either side of the house without issue. Between the Big Tub addition and subsequent grading, the bulk of the water is now directed to the Shop side of the house.

The problem was that the runoff was accumulating near the Shop instead of draining on to the side yard. At one point, the water got so deep close to the house that it overflowed the retaining wall protecting the under-house access door, and flooded the house’s ductwork. In another prolonged monsoon, water got so high around one of the Shop’s big doors that the shop flooded. Standing out in several of the rains trying to figure out a solution did nothing more than get me wet. It was time to survey the yard’s elevation. 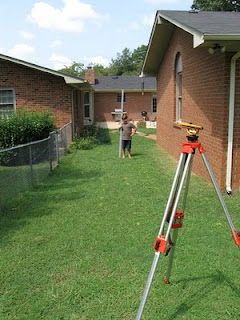 After laying out a grid of yellow dots in the yard spaced at two-foot intervals, Daniel and I spent some quality time surveying & recording each dot’s elevation. The transit’s relative numbers were then crunched into absolute elevations relative to the fence gate’s drain point (to Daniel’s right in the image above). 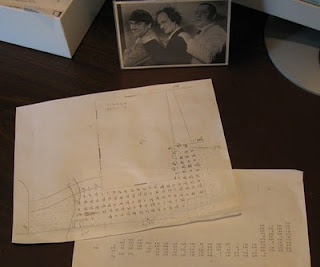 Now that I knew where to look for high spots, it was easy to see why water was not draining. To correct it, though, a wide, shallow swathe of topsoil needed to be scratched off. I thought about renting a Bobcat & doing the work myself. But since I wanted it to look good, a landscaping company, found in the Yellow Pages, was asked to come out & take a look.

“L.A.” showed up a day or two later and patiently listened as I waved my arms and talked about Daniel & me shooting elevations. Then I patiently listened after he said “sure – no problem. But…” and went on to try & talk me into a French drain installed across the half-acre backyard. When he saw I was not biting, he then tried to talk me into an outdoor patio kitchen complete with a sink & running water. After sensing no enthusiasm on my part and seeing Cookie run across the yard with her ball, he outlined plans for a glorious koi pond complete with waterfall, “the dog will love it!”

He ended up spending almost two hours at the house suggesting all sorts of supplemental work before we agreed that all he was to do on this visit was to move dirt around while not disturbing my Victory Garden. At one point, I wished I’d just decided to do the work myself. But after watching how much handwork they put into the job, I was happy it was them sweating, and not me. 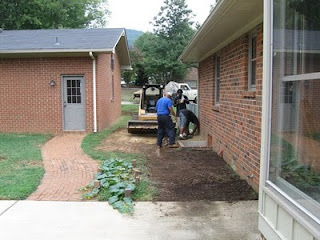 To their credit, L.A. & crew ran water in all the scraped areas to make sure better drainage paths had been formed. 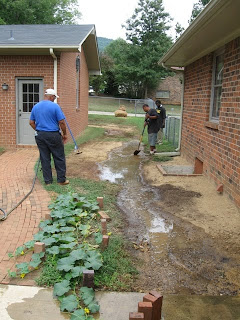 Cookie enjoyed the king size bed feeling of all the new straw. 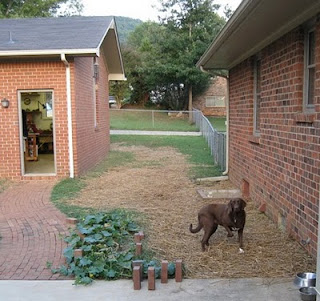 While it had not rained in the days prior to the guys coming over, it rained right after they left, and I ended up doing a little shoveling of my own the next day to correct some minor problem areas. Getting grass to grow was now the priority especially before the next rain. The problem was that just about every day has had a temperature of ninety-something degrees, and grass seed requires a much lower temperature in which to germinate.

L.A. had thrown out some generic grass seed before he left, and a lot of it washed out of position during that first night’s rain. Having heard that Pennington Seed’s “Dense Shade Mix” actually grows in dense shade, I bought a bag of it for the shaded areas, a bag of Kentucky-31 fescue for the open areas, and a couple bales of straw to re-seed & re-straw the effort.

Remember the Victory Garden? At first, I thought it was a cucumber plant. Then the fruit started growing in the shape of a watermelon. After a week or so of daily watering to get the grass to grow, then skins of the two remaining fruits started striating like they were going to split. But they didn’t.

Unfortunately, a day or two later, worm holes were found on both fruits. Cutting one open, it appeared to be some sort of melon even though it smelled like a cucumber. 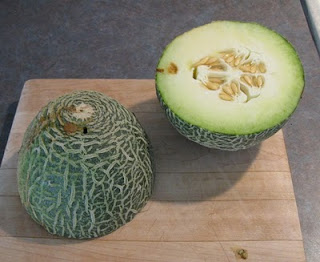 Maybe the bird that left the seed will leave a genus-species tag next time.

Several yards of really good topsoil had to be removed from the flood plain, and I asked L.A. to spread it in two different places where I was having trouble growing grass due to substandard soil. After over a week of daily watering, the good soil spread on the west side of the house has yet to yield a single blade of grass. It’s just too hot, and most of that area is in full sun. 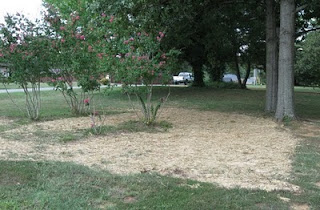 The east side of the lot, though, got covered with much of the first scrape of established grass, and looks pretty good. 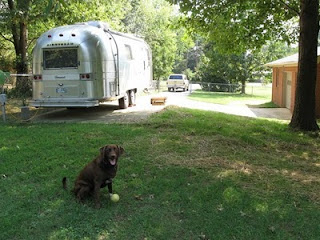 In spite of how hot it has been, there is a decent amount of grass growing near the house 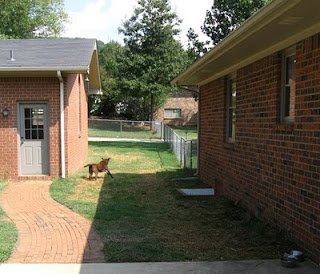 …and downstream of the Shop’s big doors. 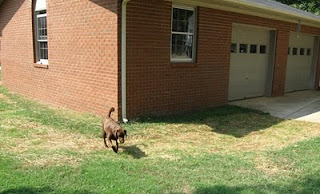 Between the extra helping of straw and the grass that has grown, the scraped area should be able to handle a gentle rain.

The almanac says summer officially ended yesterday. Today’s high was 94. But, as Yogi would say, “It’s not over till it’s over”. My yard’s ready for cooler weather, though.

I’m glad we’re headed to Disney World next week to give me a break from agitating over growing grass. But if nothing else, I hope I’m now done with standing in the rain watching everything flood.