We spent Labor Day weekend enjoying the Smoky Mountains around Townsend, Tennessee. If I had a Lumex something something 10 camera like my buddy Frank, I probably could have shared a more breath-taking image of the surroundings. But you can get the idea from this one: 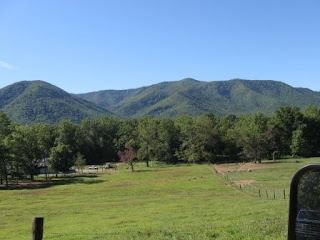 Since we were scheduled to hit the campground around supper time, Kim and Jared spent the evening before we left cooking the meat for the evening’s meal beef tacos. 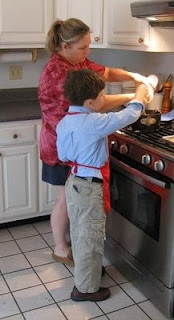 I’m sure the Townsend KOA will win the President’s Award for 2010 when the votes are counted. The place was staffed by friendly people, and was incredibly clean, and well maintained. 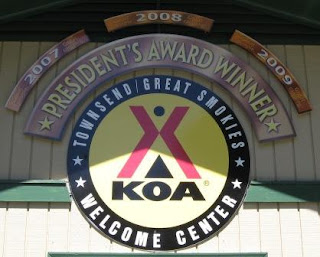 In what I thought was a nice gesture, they gave us two bags of popcorn after we checked in. Unfortunately, our Airstream does not have a microwave, and since the bags had no oven directions we opted to bring them home with us. 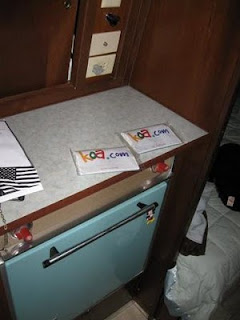 Our campsite was great in that it had, I believe, the biggest concrete patio area we have ever had. As an added bonus it was only two sites away from both the playground and a bathhouse. 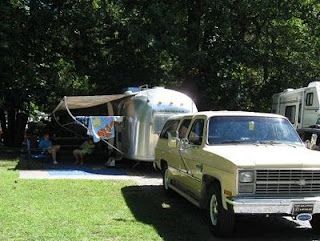 Jared got some serious use out of the playground. The Monkey Bars and Log Roll were particular hits this trip. 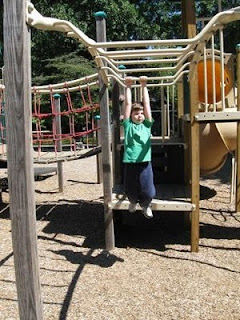 We spent part of one day doing touristy stuff taking in the natural beauty of the area. We even saw a black bear at one point. 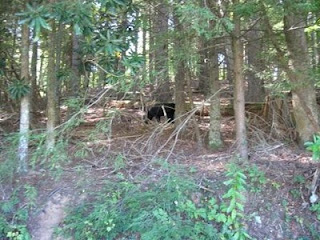 The bear impressed Daniel until I told him it was a ringer hired by the Park Service to wander around and pose for people like us. He thought about it for a split-second before saying, “Daaad!” Then we all had a good laugh.

There was a creek running behind the campground complete with tadpoles. 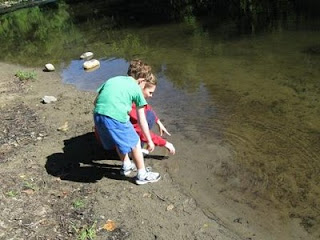 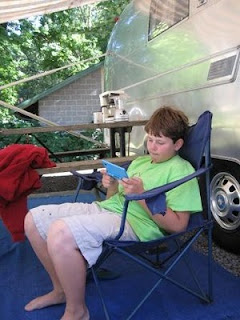 The pool was great. It reminded me of when I was in the Swim Club, though, because the water was colder than no one’s business. But the Boyz seemed to enjoy it. 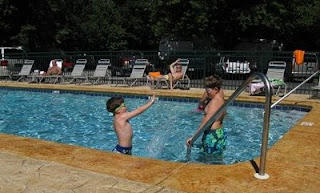 Kim enjoyed catching up on her reading while the Boyz swam. 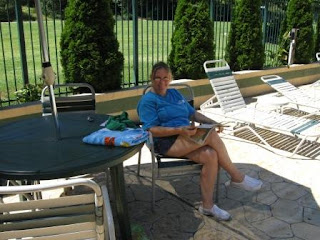 While there were people out tubing on the creek, we decided they were hardier souls than us because the weather that weekend had been unusually cool at night, and the water seemed to mirror the mid-forty degree temperature my thermometer read the next morning. Since the Boyz still remembered tubing on a different river last year we didn’t feel we were robbing them of a new experience. 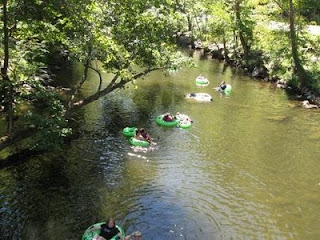 We had Tom’s famous chicken roll-ups the night before we left. 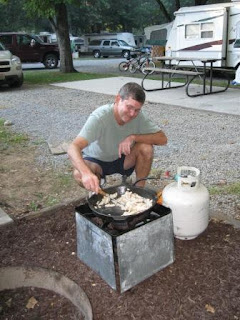 It was a great vacation capped with an uneventful ride home. I could wrap it up with that, but I’m sure my Aunt Shirley would be distressed if I were to not give the Burb Report.

You may recall that I’ve had several air conditioning issues lately. Fortunately, the Mighty Suburban’s air conditioner held up during the trip, and still appears to be doing well. I did have something else odd happen with the antique truck that put us on alert for a mile or so. Even as old as it is, the truck’s gas tank has a check-valve to let air in, but keep fumes from getting out. Most of the time, the check-valve does not work because gas can be smelt on occasion when walking near the tank. On long hot trips towing the Airstream, the incredible heat generated by the big engine is strong enough to heat the tank and force the check-valve closed as evidenced by the fill-cap being under pressure when we pull into gas stations. Up till now the annoyance of an occasional whiff of gas has not out-weighed the incredible amount of work required to replace the check-valve.

On the way to Townsend, the weather was in the nineties until we drove into a tremendous downpour. It rained so hard we had to slow down to 45 mph or so for a time. It had been raining for around five minutes when I remarked to Kim that the rain was nice in that it cooled the floor down. A few minutes later, we were within sight of our exit when the Mighty Burb started having trouble. “Fuel issue” popped into my head. I didn’t think it was the fuel pump, though, because we were on relatively level ground and the position of the gas pedal did not seem to influence the issue. As I was sorting the clues, I remembered when my best friend from high school and I would take the Geek Boat out (the name is another story). We had to run on portable, marine fuel cells because the onboard fuel cell rusted out years ago. Invariably, we would launch the boat, fire up the Mercury 80-hp outboard, and blast off only to have the engine sputter & quit after less than a minute of enjoyment. We had forgotten to open the fuel cell vent.

The Burb was acting the same way. But by the time we got off the interstate, the problem cleared itself. But I went ahead and topped-off the over-half-full tank & checked under the hood at the closest gas station. I think the truck’s check-valve stuck shut under the heat load, and the rapid cooling of the tank by the rain created a vacuum which prevented the pump from supplying fuel to the motor. Regardless, we continued the trip without further mechanical incident. “Ride quality”, on the other hand, plagued us the entire way there.

Near the end of last camping season, the Suburban’s steering was acting funny enough for me to take the truck to the tire shop who installed the tires seven years ago. Since the front tires were found to be cupped, I had the guys balance & rotate all four tires in addition to aligning the front end. Other than the cupped tires making more road noise in their new location, the problem was fixed. I later replaced all four shock absorbers.

Over this summer’s course of camping, all had been well until returning from our trip to Stone Mountain a low speed vibration was noticed. Since the tire shop had warned me cupped tires would need more frequent balancing as the cupping wore, so I was not overly concerned.

Leaving the tire shop, while everything was better, unfortunately it was not totally fixed. Knowing the root cause was cupped tires, I continued on home. As I was still in the process of validating the latest air conditioning repair, enough miles were accrued at various speeds without incident to make me think the Mighty Burb was ready for the Smoky Mountain trip - even with nine ounces (over a half-pound) lead weights on the LR wheel. 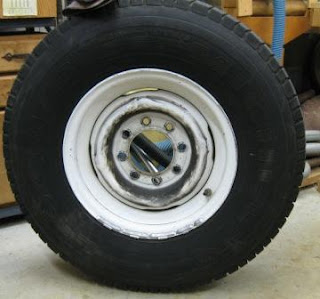 Unfortunately, due to the weight distributing hitch, the Suburban rides differently with the Airstream in tow, and a vibration showed up at 65 mph – our normal cruising speed. I think the issue bothered Daniel the most because he was in charge of constantly adjusting the camping gear stowed in the back of the truck to keep it from rattling. Before we left the campground, the wheel-of-many-weights was swapped with the spare tire, and we were able to return home with no additional wear & tear on Number 1 son.

I took the wheel back to the tire shop hoping their balancing machine had just had a bad day on the last visit. No such luck – I was standing at the machine when it read out “0.0 ounce needed”. Oh for the days when tire shaving (or “truing”) was common. I called around and could find no one who still had that equipment.

We’ve got a trip planned to Disney World at the start of next month, and the tires will have to be replaced before then instead of at the start of next camping season like I had hoped for. Maybe Michelin will hear about this and send me new tires as a goodwill gesture…