Scientology and the Art of Dryer Repair 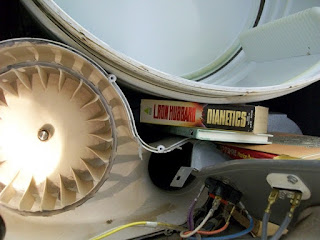 One of L. Ron Hubbard's books lent great support to the other week's task of getting our dryer to quit sounding like it was drying a patrol's worth of combat boots instead of ordinary clothes.

To service just about everything on late-model Maytag appliances, the front panel has to be removed. In this case, the drum was left unsupported. Although I have forgotten 99% of "Dianetics", one passage did come to mind, "Recalling the dramatic and overlooking the important, man has conceived himself, to be an object of chaise by necessity and pain... Whatever there is of necessity is within him."

To me this translates, roughly, into "Necessity is the mother of invention". Mr. Hubbard's book filled most of the void left by the panel's removal.

The extra noise was found to be coming from the squirrel cage fan - it was spinning freely on the motor shaft. A 'flat' which keys the fan to the motor shaft had disappeared from something like 16 years of use. Fortunately, the replacement part's mounting junction appears to have more 'meat' in that area. 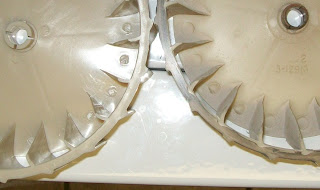 All's quiet now. Perhaps I should use the peacefulness to re-read "Dianetics"...