Only Eight Years Between Failures? 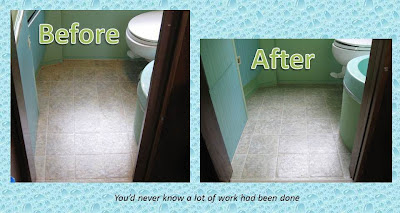 At the end of last year’s camping season, I noticed what appeared to be a small soft spot in my Airstream’s floor next to the aft wall near the bathroom sink.  After a very casual inspection revealed no smoking gun, I decided to do nothing about it just then.

Well the spot grew over the winter, and after our last camping trip, it was obvious something had to be done, and I was far from happy about addressing the area again.  This exact same area was rotted out when I got the camper eight years ago, and the entire bathroom was re-decked to fix it.

The wood/aluminum/bumper interface at the aft end of a 1967 Airstream looks like a rot problem waiting to happen.  As a consequence, many extra steps of sealing & caulking were done during the initial refurbishment to stave off potential water intrusion.  Obviously, more should have been done.

Now, the floor was re-decked back then with Oriented Strand Board (OSB) which I know is not many people’s favorite.  But any wood product will eventually rot if left to soak in water and that is exactly what happened here.  To keep the sheet-vinyl floor covering from splitting at deck seams due to vibration, the covering had only been glued down at its perimeter.  Once water leaked a path through the four-inch or so glue bond, it became trapped between the linoleum & decking.  The clock had apparently started ticking long ago.

The tub, due to its size, was the major stumbling block.  Now that I’ve “been around the block” with bathroom repair, a close look was taken.  Sure enough, the tub, after un-riveting, could be propped high enough to allow unfettered access to the floor.  The sink was similar in that the countertop could be raised high enough to remove the base cabinet. 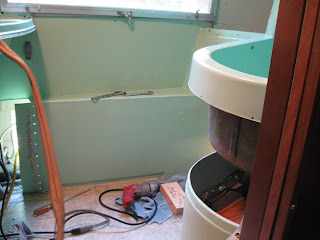 The black tank, since it is mounted directly beneath the bathroom floor, had to be removed.  Although the removal was painless, I was surprised at the condition of the metal box in which the tank sits. 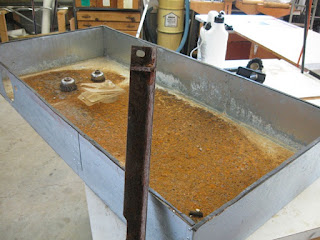 While everything was dry, it was obvious that water had been trapped between the tank’s insulating Styrofoam and the box bottom for quite some time.  New eight years ago, the galvanized box had heavy rust pitting.  Many years ago the freshwater hose connection leaked into the box during a night of camping.  While that may have been what caused the damage, I have never been comfortable with the camper’s belly skin covering the bottom of the box – too many opportunities for trapped water leaking past the rivets which hold the box together.

With everything out of the way above & below deck, the floor was cut out back to good wood with a jigsaw. 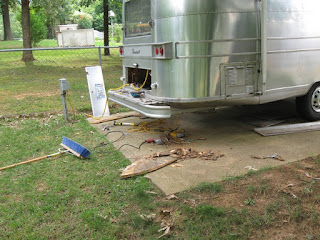 Normally, I enjoy working with wood, and have enjoyed countless projects which required building or rebuilding something out of wood.  New wood was NOT going to be part of this repair.  Eight years between failures is WAY too short.  So new decking was not cut for this project; it was cast… with non-rottable Fiberglas & resin. 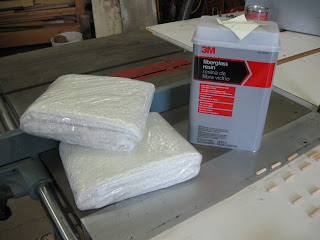 To provide a solid interface with the existing decking, dowels were drilled on 1-inch centers. 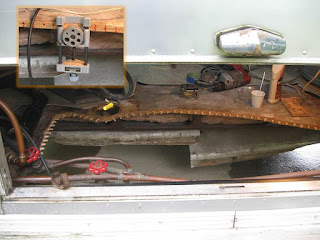 Caulk and hot glue were used to make the Airstream resin-tight.  A plastic-covered, ¾-inch piece of plywood held in place underneath with a service jack formed the mold’s bottom. 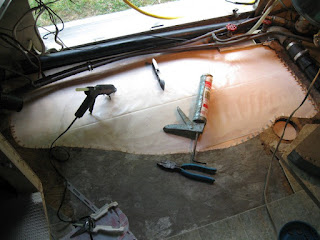 The going-in plan had been to use many layers of custom-cut fiberglass mat. 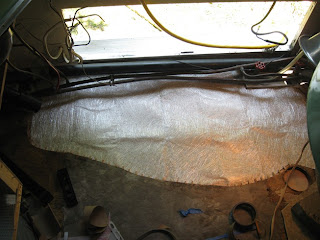 But the work area proved to be too big, and smaller, random size strips were used.

Although the plan had been to make an all-fiberglass repair, a volume calculation indicated that slightly over three gallons of resin would be required.  Deciding I didn’t want to have slightly less than a gallon of resin left sitting on the shelf, a 3/8-inch thick piece of plywood was cast into the project as filler (trust me – I made triple-sure water could not get to it). 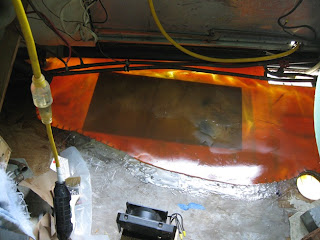 I went to the paint store originally to buy a SEM-brand rust neutralizer.  But I came home with a quart or POR15 black. 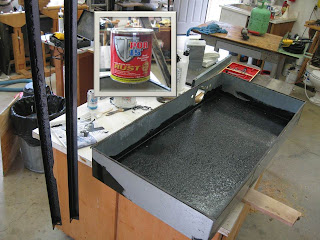 I had never used POR15 before.  But I like it, and will use it again.  Hopefully, I will remember to wear gloves, though.

Reinstalling the black tank was a high-water mark for the project. 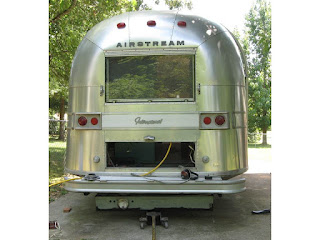 Fortunately, some of my original construction marks for locating the tank were still present, and cutting floor holes for the toilet & vent did not have the same pucker factor it had eight years ago.

Although the resin appeared to be self-leveling during buildup, its thickness across the repaired area ranged from 5/8” (the goal) up to ¾”.  The extra thickness around the toilet’s closet flange was not a good thing as the flange did not screw in far enough to give me a warm fuzzy.

After making sure the toilet gasket could accommodate the next step, a router guide of 1/8” hard-board was weighted down, and the smallest router I had was pressed into service with a ¾” straight bit to recess the deck an eighth of an inch. 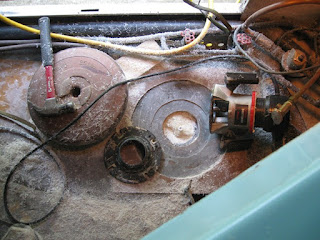 To any woodworkers reading, I got that Craftsman router new when I was in high school in the seventies.  Unlike newer routers with soft-start, this one jerks when switched on.  I’ll never part with it.

The decking was belt sanded before and after wiping with a small amount of leveling compound. 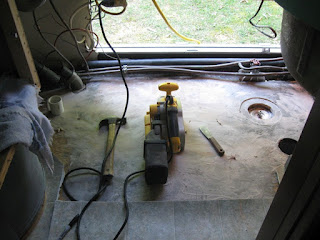 When the floor covering was originally installed, I remember the edge of the roll advising “do not reverse”.  This seemed odd because the pattern was square-shaped.  But since there was more than enough material, reversing was not an issue… then.

Although the scrap of the original material I had saved had enough square feet, it was irregular in the wrong direction – I had to reverse the pattern.  To my surprise there is a difference.  But due to the bathroom’s small size I do not think it is eye-catching. 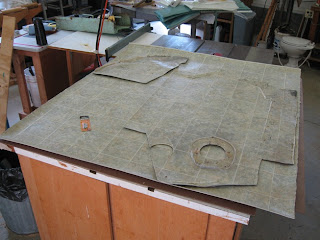 Every square inch was glued down this time and J-rolled.  Bricks weighted down the seam and ends until the glue could set up.  A seam sealing kit was used afterwards. 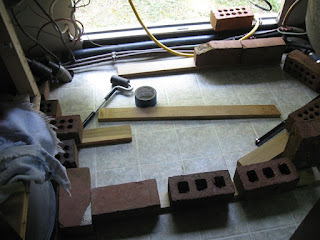 While all this was going on I went around with an ice pick to make sure there were no other rotten floor issues – might as well fix everything now.  Thankfully, no other problems were found.

Since I’m still running the original stove, refrigerator, oven, furnace, and water heater, it’s anyone’s guess as to what will need repair next.  At least it will not be the bathroom floor for the foreseeable future.