One A/C Repair After Another 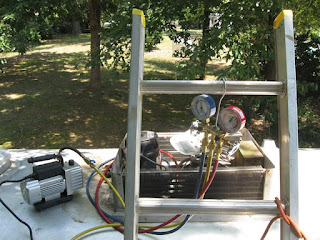 This year has just not been a good one for working air conditioning at our address.  Near the start of the cooling season, the Suburban’s lack of cool was traced to a leaky compressor shaft seal.  Within a week or so of that, the house A/C decided to blow out a relatively new start capacitor.  The house’s unit was fixed; the Mighty Burb was not.

Later in the season, a wire burned off the house’s air conditioner, and it took me two tries to get the repair right.  Last month, the Airstream’s original Armstrong TAC-110 air conditioner went out on our way to Key West.  Its repair had to be delayed until some totally unexpected (and REALLY unappreciated) floor rot in the camper was repaired.

When I finally had a chance to evaluate the Airstream’s A/C, it was found to be out of refrigerant.  After pressurizing the unit with dry gas, the condenser coils were doused with soapy water until a stress crack was found in one of the ¼-inch copper supply lines.  Now, the proper repair would have been to replace the short length of 45 year-old copper.  But unsoldering it from the equally old, un-replaceable condenser coil and silver-soldering a new piece in had a high pucker factor attached to.  I did not want to do it myself, and there was a distinct chance that even a skilled professional would have a problem.  So the area around the crack was sanded shiny, and gooped with JBWeld. 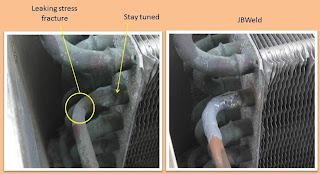 After allowing the repair to cure overnight, the system was then vacuumed down to a respectable 29 inches vacuum and allowed to sit, valved off, for a couple of days until I could arrange with my buddy Kenny to share some of his R22 refrigerant with the unit.

When I had the current compressor installed around six years ago, I remember the man who did the work whining about there being nowhere to run his gauge hoses and have the fan-air-directing cover on simultaneously.  Being able to do so was, he told me, important for good gauge readings.  His complaint bounced off of me at the time because I did not know as much about A/C as I do now, and I had offered him the unit’s original installation instructions for insight which he declined to read.  But he persevered through his adversity, and left the vintage unit cooling admirably.

While waiting for Kenny, the opportunity was taken to read the instructions.  Apparently, the end-user was supposed to drill two 7/8” holes in the side of the unit in which the hoses were to be routed for operation with the cover on.  A quick zing zing with a bi-metal hole saw, and the job was done. 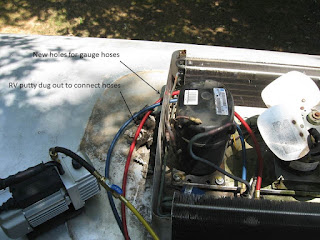 Another cool thing about the instructions was that it listed the correct load, by weight, of refrigerant the system needed (2 lb, 2-1/2 oz).  Talking with Kenny about everything, he allowed that he didn’t like the JBWeld idea, and he did not own a refrigerant scale.  But he understood my concern about brazing onto an un-replaceable part.

Fortunately, someone else was able to loan me a scale.  After hearing that, Kenny just loaned me his bottle of R22 in return for two cases of beer.  We both thought it was a fair swap.

Right before going out to charge the system, I noticed the house was not as cool as the thermostat was asking for.  The house unit’s start capacitor had conked out again.  While there is another story attached to getting the unit running, for now I will just say a new capacitor got the house back in the cool.

After confirming the Airstream’s air conditioner was still at vacuum, the scale was toted top-side, and the correct amount of liquid refrigerant loaded. 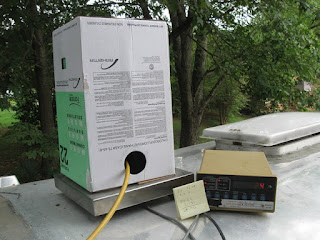 The Airstream’s A/C recharge was different than the Suburban’s in that the Airstream sucked in the entire charge as liquid with the power turned off.  The Burb, during last year’s repair, had to take most of its almost five pounds of refrigerant with the system running.

After applying power, the antique unit immediately came to life & got down to business cooling the place down.  After allowing the system to stabilize, temperatures & gauge pressures were found to be surpassing the performance guidelines listed in the installation manual.  Although my work here appeared to be done, I decided to let the unit run overnight before buttoning everything up.

The next morning, there was neither cool in the Airstream, nor pressure in the middle-aged refrigerant lines.  Re-pressurizing again, the previously JBWelded area was found to be okay.  But a “spot” upstream of the treated area was blowing soap bubbles like no one’s business. 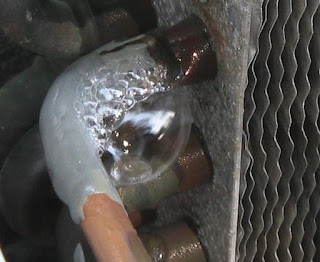 While I have no idea why it waited to go bad, the copper line obviously had to be replaced now.

Having more regard for Kenny than the fella who did the compressor R&R, I got Kenny to lug his oxy-acetylene rig over.  Of course he had to rib me the JBWeld repair, and act like he thought I was not telling the truth about the new leak path.  But he did understand why I was hesitant about anyone working on antique parts. Other than tight working quarters, Kenny had little trouble with replacing the defective length of plumbing.  After letting the repair cool, the system was charged with 200 psig of nitrogen, and valved off.

The next afternoon, after the A/C was found to still be holding 200 psig pressure, it was tripled-purged/vacuumed before being recharged with R22.  Once again the unit fired right up and got busy cooling.  But unlike last time, the unit is still running several days later.

The Suburban’s A/C has not been repaired simply because the high cost of gas has knocked the truck out of the towing lineup – It has been relegated to pushing the boat into the boat’s parking spot via its front-mounted receiver hitch.  Also, the repair itself will be expensive - $300-$700 depending on whether new or rebuilt parts are used.  I’m not in a rush to spend that much money right now.

For now, I’ll just keep playing the cooling game by ear.  But I sure do hope I do not have to pull out my gauge set anymore this summer.