A Fun Find in Branson MO


Acting on a suggestion from Number 1 son, we hitched up the Airstream and motored over to Branson Missouri the other weekend for two days of unscripted vacation.  In spite of not taking in any of the shows the area is famous for (or maybe because we did not) fun was had by all.  Blissfully, although the outside temperature hit 106 degrees, the camper’s newly-repaired air conditioner kept us quite comfortable at the campground.

In a “first” for our family, we all went to an outlet mall together and no one got grumpy.  Swimming at Table Rock Lake helped us beat the heat as did the slide at the campground’s pool. 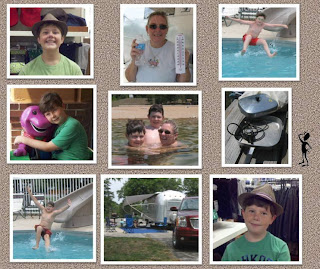 The first night there got exciting when 60 mph winds hit in the middle of the night and threatened to rip the Airstream’s brand new awning off.  I had to stand on the picnic table and turn the awning barrel by hand to get the awning rolled up because the wind kept catching it when we tried to roll it up the regular way.  That was excitement I’d rather not repeat.

In addition to shows & motels, Branson’s main drag also has a variety of shops.  While most of the businesses are tourist oriented, a trio of thrift shops caught Kim’s eye and we decided to stop and check for bargains.

While I enjoy looking, I can’t remember the last time I bought anything at a thrift shop, and did not expect this visit to be any different.  That was until I spotted something I had been looking for for the last eight years - an electric skillet in working condition without a Teflon cook surface.  The price was right at six bucks.  Number 2 son made a haul too – He found several Blue’s Clues video tapes he did not have for 50 cents apiece.

We had a great time during our short stay in Branson, and could visit again.  Maybe next time we’ll stay a little longer, and take in a few shows; we’ll see.

I was tickled to find the Teflon-less skillet because, while Teflon surfaces are good for cooking some things, I find it gives griddled foods like pancakes & hoecakes a leathery skin.  Even fried eggs have a different consistency when cooked on Teflon.

I prefer an electric skillet when griddling food because it is tough to control my stove-top griddle’s temperature across two burners.  To this end, I use a Sunbeam, non-Teflon skillet which dates back to the early seventies.

The skillet used to be loaded into the Airstream for every trip because we always have pancakes at least one morning during the outing.  In an effort to make the camper self sufficient, I have had an eye out for another non-Teflon skillet since Airstream trip #1 with no joy – no one now makes one, and none were showing up in yard sales.

Earlier this year, between laziness and concern about damaging the skillet, a new Rival Teflon-coated electric skillet was purchased for the Airstream.  Although the Teflon was expected, a glass lid was not - What’s the deal with glass lids on all new cookware nowadays?  That is a trend I hope blows over soon.

A day or two after getting home from Branson, my electric skillet collection was lined up on the kitchen table for comparison. 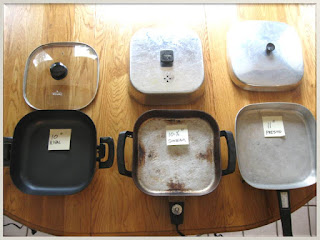 My “new” Presto KC81-A skillet, judging by its size, construction, and weight, appears to be quite old.  Although Mr. Google could tell me nothing about the model number, I believe the skillet dates from the sixties.  By far the heaviest of the three skillets, its mass should make it a good griddling skillet.  But my early seventies Sunbeam skillet does a great job with pancakes.  A cook-off between old and older may be in order.

Plugging the Presto skillet in reminded me of something new appliances don’t have nowadays – a long power cord. 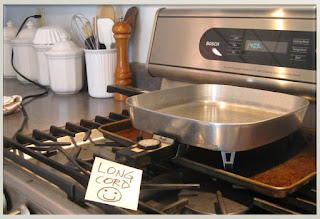 Cooking without a Teflon coated surface takes more prep because the pan must first be seasoned, and the Presto skillet was dry as a bone.  While everyone has their own idea on the right way to season cookware, in this case just enough peanut oil was poured in to cover the probe on a digital thermometer so the thermostat’s calibration could be checked.

After deciding the thermostat was close enough, the oil was allowed to cook at 400 degrees for around 20 minutes.  After that the oil was poured out before pan-frying chicken fingers followed by hoecakes. 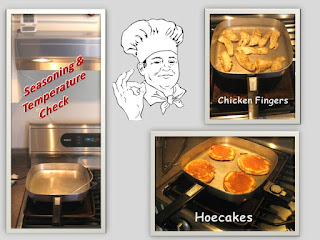 The skillet did a great job with both the chicken and hoecakes.  Both were enjoyed with a mess of home-grown string beans and acorn squash one of my friends had brought me that day.  The skillet is obviously ready for a return to prime time.

Hopefully, Number 1 son’s next destination suggestion will have a place that sells something he wants – Other than fond memories, all he came home with from Missouri was a new pair of Nikes.