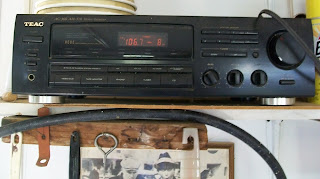 A couple of years ago, I decided it would be nice to be able to listen to what’s playing on the house’s stereo out in my shop.  Since there was already a receiver & speakers out there, it made more sense to use a radio transmitter to broadcast the current musical selection via radio waves than to run underground wires.  Luckily, the timing was right for Santa to leave one under the tree for me the Christmas before last.

Unfortunately, after hooking everything up in a variety of configurations, the broadcasted music had a 60-cycle hum that I could not completely get rid of.  Although frustrated, I was not too surprised because the aquarium, with its filter pump, air pump, and florescent light ballast, is both near the stereo and plugged into the same electrical circuit.  As those three items are notorious hum producers, the situation looked grim for hum-free tunes.  As a consequence, the transmitter was not called upon very often.

While that idea panned out poorly, the addition of Sony cordless headphones to the system last year has been enjoyed by all for different reasons.  Good thing, too, because the installation took more effort than planned.  These headphones work by receiving infrared waves from its base station.  But since infrared requires a clear line of sight, wires had to be run under the house so that the base station could be located out in the den away from the stereo in a location with a clear view of both the La-Z-Boy & adjacent kitchen. 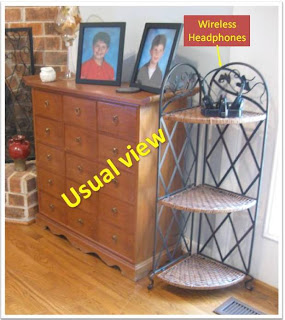 The other afternoon, while queuing up some CDs, the whole-house transmitter’s poor performance came to mind coupled with a desire to readdress the problem.  After recalling everything that had been tried during the initial installation, I decided the best option was to relocate the transmitter.  Before I could ask myself, “but where?” the headphone base station’s location came to mind. 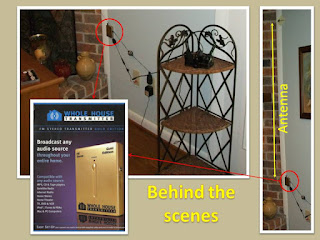 The setup was perfect because the power outlet was on a different circuit, and there were no noisy AC appliances close by to inject hum.  In another bonus, the fireplace’s trim moulding provided an excellent cover for the transmitter’s five-foot long wire antenna.  A couple of RCA jacks added to the wall-mounted headphone jack plate was all that was needed for operation.  After setting broadcast levels with Billy’s “Vital Idol” CD, Radio Station TOMW was on the air with dead silence between songs.

If you’re ever within 150 feet of my house, feel free to slow down for a listen on 106.7 MHz – You’ll probably never hear a more eclectic mix of music.