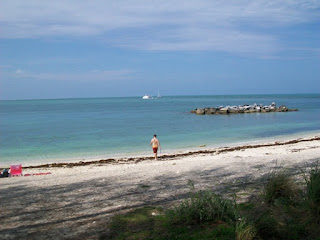 We took a week off around Memorial Day this year for a first-ever Airstreaming trip through the Florida Keys.  While we had a lot of fun, the use of a different tow vehicle combined with both a really long travelling distance and an air conditioner failure en route made for the most memorable camping trip we have had in years.

Normally, the Mighty Suburban with its ¾-ton suspension & 7.4-liter engine is chosen to get both us & the Airstream safely to our destination.  For this trip though, I declared early on that, due to the distance involved (2100 miles roundtrip) coupled with the Burb’s voracious thirst for mid-grade gasoline we would be using my ¾-ton, extended-cab Silverado.  This choice was met with resistance by the Boyz because of the limited back-seat room.  Kim was okay with the decision because the only other choice was to use her ½-ton Yukon, and she did not personally find the option appealing.

Well, apparently the Boyz must have worked on their mom off-line because a week before the trip, Kim volunteered she was willing to go on a test ride of what would be her Yukon’s maiden voyage of towing the Airstream on the interstate.  If she felt comfortable enough with the truck’s overall performance, she would agree to its use instead of the Silverado.

Now I already knew the Yukon was load-rated for the task, and had both the appropriate towing receiver & seven-pin wiring connection.  Hooking up the electric brake controller was ultimately no big issue because a local RV parts place had the fittings needed in stock.  Adjusting the drawbar’s height so that the Yukon could tow the Overlander in a level attitude required a lot more effort than anticipated.

The Suburban’s receiver sits below the bumper, and the ball had to be raised to connect correctly with the travel trailer. 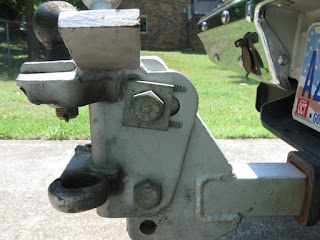 The Yukon’s receiver comes out of the bumper, and the truck’s bumper sits much higher than the Burb’s.  Even after disassembling the drawbar, inverting the shank, and reassembling, the ball was still around two inches too high for level towing. 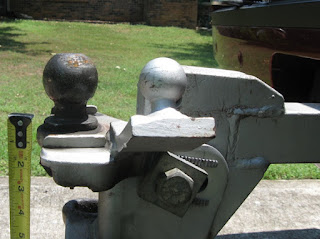 After much reading on etrailer.com’s web site, a replacement shank with a much lower drop was identified, and, after not finding it available locally, was ordered with expedited delivery. 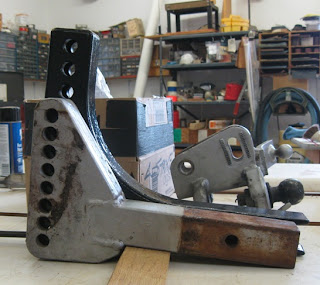 The new part bolted up as expected.  After an hour or so of tweaking to ensure proper weight distribution, success was declared, and Kim & I went on a test ride without the Boyz. 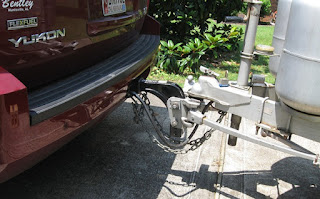 We had not gone more than a few miles before I decided the tires could use more pressure than the 32 psi recommended for general, non-towing use.  Other than that, the truck performed better than expected.  After what ended up being a 73 mile test drive which included highway, interstate, and city miles, Kim declared she was okay with the Yukon as an Airstream tow vehicle.  The Boyz, of course, were thrilled.

A couple of days later, we left town with the tires pumped up to 40 psi for an uneventful, 12 hour trip to our halfway point of Ocala, Florida.  It was there I discovered one of the Yukon’s fringe benefits – Rear access is available while hitched up. 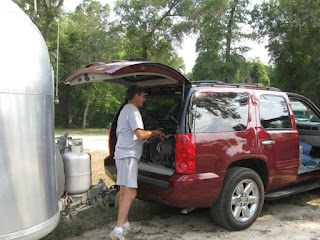 The Suburban has to be unhitched to lower the tailgate.  Although there is some access after rolling down the tailgate glass, it sure was nice to have instant access to everything.

The hard-shell tacos on the menu for the first night’s meal necessitated running the oven.  Although it was fairly warm outside, the Overlander’s air conditioner has always been able to keep up with anything we’ve tossed at it, and there was reason to think differently now.  Turned out there was – While the A/C started out okay, its air temperature began warming as dinner preps progressed.  By dinner time it was not cooling at all.

While that first night was not particularly comfortable, we decided to continue on with the vacation.  After another 12 hours or so on the road, we were all thankful to finally make camp at Key West.  Daniel grilled dogs for everyone on the new Weber mini grill. 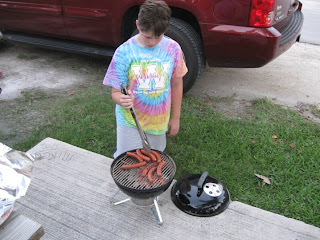 Although we usually lug the full-size Weber when we’re in the Mighty Burb, there was not enough room in the Yukon for it.  It was a small price to pay, though, because the mini grill worked out fine over the course of the vacation.

The original plan had been to back in to an ocean-front site.  But due to a front-office SNAFU, our first choice was not available.  But it was not hard to settle for an “almost-as-good-as” site since it had considerably more room & shade to help with our lack of A/C. 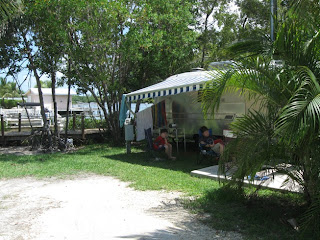 In spite of having all the windows & vents open, no one slept well that first night.  While the next day’s play at the beach was enjoyed by all, once we returned to the campsite, everyone thought the campground’s pool was a better place to hang out.

Kim & I have a $100 rule – If something costs more than $100 we have to discuss it.  So I said, “Kim: if there is a Home Depot around here, how ‘bout we go buy a window air conditioner?”  Instantaneous approval – She couldn’t get to the front office fast enough to ask for directions.

Mounting the air conditioner in a window would have required modifications to the Airstream.  As expected, though, the unit was just as happy perched in the doorway atop leveling 2X6s. 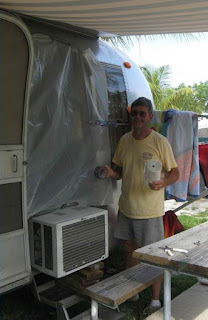 While its position made it tough getting in & out of the Airstream, not surprisingly, no one complained.  One can endure a lot of aggravation to stay cool.

Although I looked forward to a better sleeping temperature, sitting outside under the new awning while drinking beer and watching the local wildlife also had great appeal.  I’m used to birds & squirrels.  This place had roosters, iguanas, and crabs.

Key West had a tourist trolley we went on, and one of our drivers did a really good job explaining all the landmarks & such.  We skipped paying to tour Ernest Hemingway’s house to spend our money at Margaritaville. 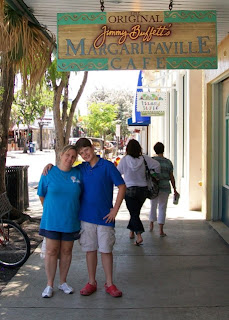 Between having both lotsa fun and air conditioning, we opted to tack another day onto the vacation.  But all good things must end and we eventually had to make our way back to Ocala.

After driving another 12 hours the next day we finally arrived home.

All in all we all enjoyed being in Key West.  While two 12-hour days of driving to get there and the same to get back wasn’t a whole lot of fun, everyone survived.