New Awning for the Airstream 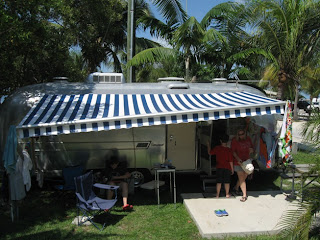 Just in time for Key West

One of the surprises eight years ago while my Overlander was being prepped for a return to service after a 23 year hiatus was that the trailer’s original awning deployed without self destructing.  In a double bonus, after scrubbing it with Clorox, we decided the 37 year old awning looked good enough to stay in service a while longer.

Seven years later, between annoyment with some under-side stains which would not come out, and the awning’s edges looking ripe for ripping, we decided it was time to replace the awning fabric.

While the awning’s original manufacturer, Carefree of Colorado, is still in business, they politely told me to work all issues through one of their dealers.  Frustratingly, the local dealer preferred I work directly with the manufacturer in determining what was needed for the task.  They would then gladly order the parts for me.

PPLmotorhomes.com, where a lot of my RV-related parts come from, listed new awnings available in a variety of colors.  Unfortunately, they only offered a white weather-guard (the last 14 inches or so of fabric which covers the awning when rolled up).  Between not really caring for any of the color pattern choices, and deciding that anything other than an aluminum/gray color weather-guard would look out of place, the search continued into a second year.

A few months ago, “Current Resident” got a postcard from a somewhat local company who was offering a discount on custom patio awnings.  Noticing the card’s pictured awning was amazingly similar to the Airstream’s I got them involved with the project.

The Airstream’s awning is a vinyl/polyester composite material.  Although the awning company normally uses Sunbrella brand fabric material, they understood my preferences, and were able to locate Weblon Coastline Plus material which was an almost identical match for the original awning’s color & pattern.

While the awning company was comfortable making the Overlander a new awning, they were not comfortable with installing it.  The lead man even had a horror story about one of his technicians once being maimed by an unwinding spring.  So, we all agreed that I would remove the old awning for use as a template, and install the new awning.

Of course I have neither ever removed nor installed an RV awning before.  Fortunately, though, since the Internet had once provided me with the original installation instructions for the Carefree awnings of my Airstream’s era, no big problems were expected.

New installations came with the awning material already secured-to/wrapped around the barrel.  The instruction sheet showed two tall people sliding the awning’s loose end into the Airstream’s rail.  While I’m normally a one-man show for most of my projects, I do have a short wife who does not mind assisting on occasion.  Unless it’s hanging cabinets (don’t ask).

The barrel’s spring tension was relieved, and after drilling out one end-cap’s rivets, Kim & I slid the barrel off of the awning & valance. 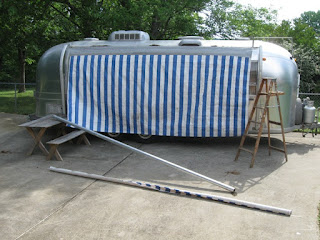 I thought there was going to be one long torsion spring running the length of the barrel.  There are two short ones – one on each end.  Carefree had installed them covered with axle grease to counter corrosion, and the springs were consequently in great shape. 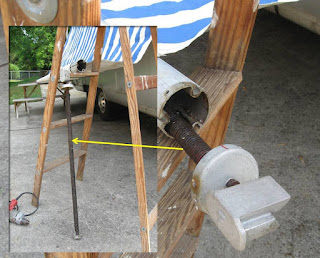 After spraying the awning rail with silicone spray, the awning would not budge from its 45 year-old resting place.  On closer inspection, three screws over the length of the rail were found to be holding the awning in place.  After removing the screws, the awning slid out without too much fight. 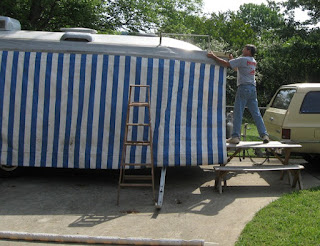 Part of the deal included replacement fabric for the bathroom window’s awning.  It came off easily, and was added to the pile for the awning company to pick up. 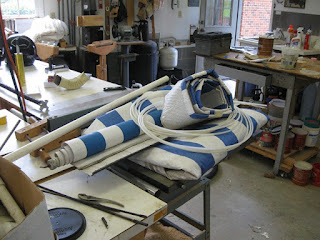 Around three weeks later the new awning arrived, and my wife, oldest son, and I got it slid through the rail without incident. 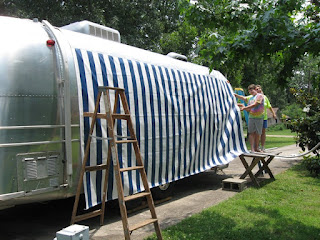 After that, Daniel & I installed the rest of the hardware, and preloaded the springs in accordance with the instructions.  No one got maimed in the process. 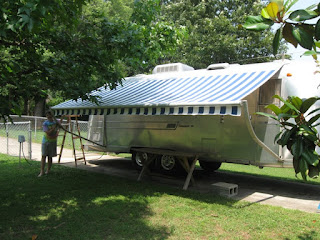 We headed out the next day with the Airstream in tow behind Kim’s Yukon on a trip through the Florida Keys.  Daniel & I both agreed the new awning, being suppler than the old one, was a lot easier to roll up evenly.  I think we will keep it.