I Now Own a Framing Nailer. woo-hoo.

While I do not make my living working with wood, I enjoy working with the medium, and have gotten pretty good at both making a variety of cabinets, and carpentry in general.

Many rooms, over the years, have been trimmed out by my hand-driven nails & back-saw cuts in a miter box before I purchased my first chop-saw, and subsequent finish nailer. A brad nailer was finally purchased after I felt I had mastered nailing backboards to cabinets by hand.

Between admiring skilled carpenters of days gone by, especially the Amish in Harrison Ford's "Witness", and the relative small size of most of my framing projects, I have always driven 16d nails by hand with a 16 ounce framing hammer. There's nothing quite like the pride from an honest day's sweat after admiring the barn now sitting where there used to be grass.

I shared this sentiment with Steve, my best-friend-from-childhood, and to paraphrase, he said, "You're kidding!" But he knows my propensity for doing things the hard way, and apparently knew I would eventually succumb to the pneumatic way of handling big nails as he had years ago.

That day has arrived. The front porch's soffit has bothered me since about two years after the "skilled" craftsmen hired to construct the structure, shortly after we bought the house, were paid. Rainwater went where it was not supposed to primarily because of a not-easily-correctable shingling job.

The house has now been re-roofed by a more conscientious team. Unfortunately, all their hammering (the main roof was re-decked) shook apart the previous team's porch's soffit construction. But the soffit suffered because neither the fascia board nor plywood was well-connected to the house. 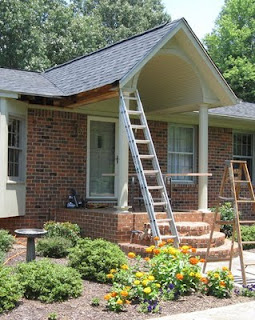 The right fix requires the overhead nailing of many 2X4s between 42 year-old rafters. Between the wood's hardness, and the fact that I'm not getting any younger, I now own a Porter-Cable framing nailer. 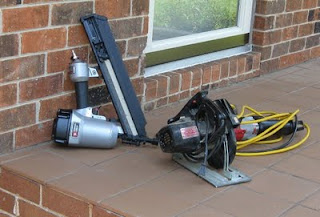