Daniel and a Catfish, Sittin’ in a Tree

The Mighty Suburban took us and the Airstream down to Blue Springs AL State Park over the Memorial Day weekend where Daniel reeled in his first fish – a four-pound, one ounce catfish. Unbeknownst to us, the Alabama Fish & Wildlife folks had scheduled a fishing rodeo in the park’s pond targeted for kids our Boyz’ age for our first day there, and a lot of people showed up to participate. One of the game wardens found out it was Daniel’s first fish, and told him that it is tradition to kiss the first catch. Daniel gamely played along. 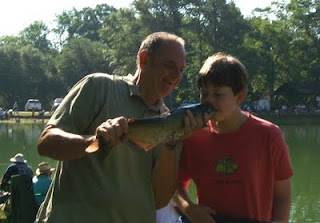 Most of the dads there were casting the line, and then handing the rod over to their kid. Daniel wanted to do everything himself. So after a brief checkout on how to operate the reel, he proceeded to get really good at casting chicken livers pretty far out in the pond. He caught a total of three fish that morning. 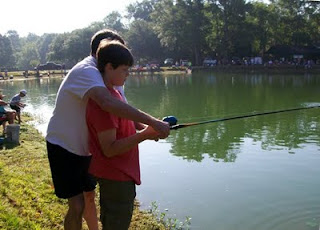 His brother’s luck was not as good. But as they say, a bad day fishing is better than a good day at work. 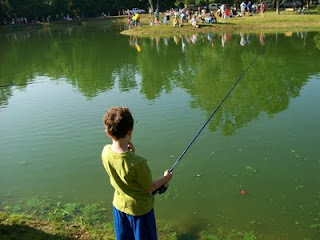 Another unexpected bonus was a genuine, cement pond. 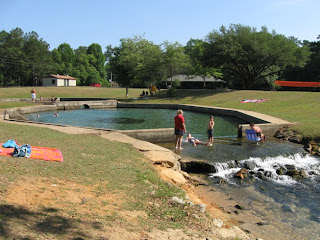 When the park was built, a natural spring’s perimeter had been widened, and concrete poured to make a great swimming hole. The runoff flows into a nearby creek which the Boyz had fun exploring. With a year-round water temperature of 58 degrees, everyone was glad the afternoons were warm.

As expected on a holiday weekend, the campground was fairly full. What caught me off guard, though, was the number of tent campers. Fortunately for them, there was no rain, and the nights cooled considerably from daytime temperatures.

Kim was able to reserve us a full-hookup site which, with its seclusion, might have been the best spot on the campground. 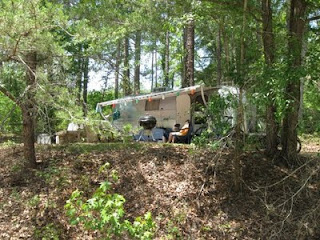 Everything about our visit was great until night number two’s dinner of grilled hamburgers. The Airstream’s grilling spatula was nowhere to be found. But after duct taping the kitchen spatula to the grill tongs, I was able to keep the hair on my arm. 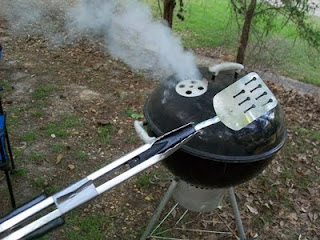 Between fishing, swimming, bicycling, and playing on the merry-go-round, no one got bored. But it was also nice just to sit and enjoy being outside. 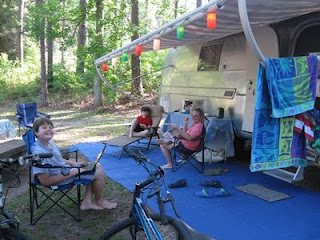 Blue Springs State Park was a fun place to visit – We could go there again.