…And the Mole Police Actually Sleeps 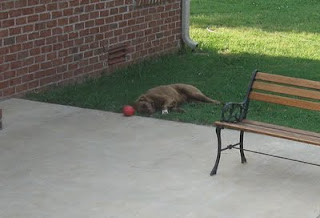 A guard dog she is not. But she was chosen from the shelter by everyone because of her small-child-tolerant disposition, and nothing else. As a result of her kind nature, Cookie’s place in our home has been secured since day one. This past weekend, though, Cookie earned her keep.

The weather was cold & gloomy, and I was not able to work in the yard as much as previously planned. Since I was just plain in the mood to be outside, Cookie & I got some serious ball-playing in between me getting done what little could be accomplished. In what I gather was her thanks for playing so much ball, over the course of the day she brought me five freshly killed moles – something she has never done before. I was ecstatic because moles have been a problem in the yard for the last couple of years.

Moles would not bother me except that the ones in my yard prefer to dig holes close to the house. With the under-house rainwater drainage issues addressed in the past few years the last thing I need is to have a mole hole allowing more rainwater in. 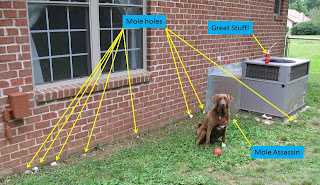 I usually fill the hole one afternoon, then cut off any cured squeeze-out the next afternoon, and rub some dirt over it to make everything blend. Not as much fun as what Bill Murray did in Caddyshack, but a lot less destructive.