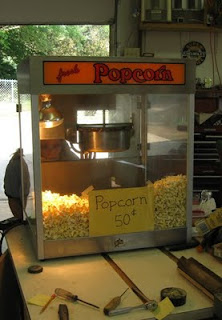 Earlier this week, Kim called me at work to make sure I was okay with her volunteering me to repair Weatherly Elementary’s popcorn machine. Apparently, the machine had been out of commission for the past year, and the school had been using a local church’s popper until the church finally asked for theirs back. Since Friday popcorn sales add noticeably to the PTA’s coffers, everyone was interested in getting the school’s machine back in action.

Oddly, everyone appeared to have a different description of this commercial-grade popper’s symptoms. Some indicated it would not get hot enough to pop, while others claimed it continually tripped the circuit breaker. One individual queried claimed it did all of the above, and burned the popcorn to boot.

While Star Manufacturing Inc. is still in business, they do not support their now discontinued Model 89 popcorn popper anymore, and surprisingly the Internet did not offer a manual or wiring diagram. Since the popper is obviously old, I decided it was a good idea to disassemble & inspect the innards for old age issues. With luck, a bad part might be identified which could be responsible for every symptom identified. If nothing else, ever since the first time I saw Marshall Theater’s corn popper when I was a kid on a bicycle, I have always wanted to know what one looked like on the inside.

In comparing this machine to manually popping corn in a pan on a stove-top eye, there are really only two differences: A production-style unit has an agitator to stir the kernels, and the heat is thermostatically controlled. After finding the machine’s switches, wiring and agitator in good order, the kettle was disassembled to find two thermostats controlling the heat coming from two different heating elements.

Heating elements usually work or don’t work, and both of these elements checked out good with an ohmmeter. Thermostats are much the same way but will occasionally have an intermittent fault. 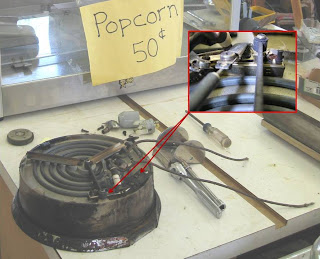 My initial impulse was to replace the thermostats since they are the weakest link, and Mr. Google told me replacements are still available. But at $60 apiece, it seemed prudent to verify there was in fact something wrong with the machine since no obvious “smoking gun” had been found.

The popper’s ID tag indicated it needs 2190 watts of power to pop as advertised. A typical home circuit can only provide 1800 watts before the breaker pops. Fortunately, a typical circuit in Tom’s PopcornWerks (formerly known as my shop) will provide 2400 big watts of corn poppin’ power. It was time to step to the other side of the Marshall Theater concession stand, and pop for the masses. 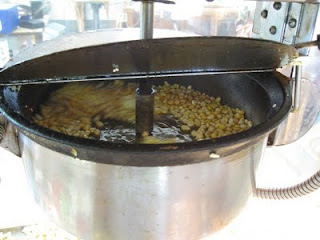 After tying my ammeter into the circuit, and doing nothing more than following the directions printed on a laminated card taped to the machine, a batch of genuine theater-style popcorn was done in minutes. I was disappointed – I was hoping the fun would last longer. Fortunately, Kim remembered one person indicating trouble did not begin until after a few batches. So, after 45 seconds of training, Kim popped four more batches while I watched the ammeter. 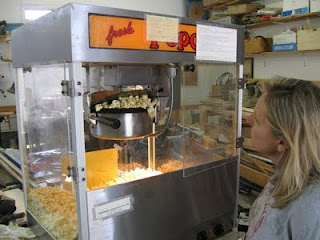 The popcorn popper never blinked an eye, and the ammeter confirmed an appropriate current draw for every batch.

Afterwards, everyone got involved to scoop & box the resulting 80 bags of popcorn - some to help, and some to “observe”. 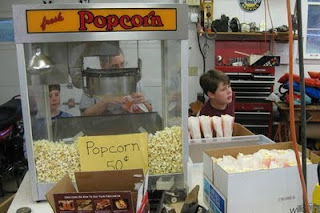 In the relatively short time it took to pop all that corn, I asked Kim about where, in the school, the popper was plugged in. Apparently, the preferred spot had been in the Teacher’s Lounge until the constantly tripping breaker forced a move to Ms. So-and-so’s room. After that room’s breaker had tripped enough, everyone decided the machine was broken.

Come to find out, the teacher’s lounge had a Coke machine & refrigerator on the same circuit as the popper, and Ms. So-and-so’s room had a laminator along with other power-hungry devices also on the same circuit. My suspicion is the 48 year-old elementary school needs to have its electrical service updated.

Kim decided to take the popper back to the school this past Friday, and operate it with an eye towards problems. Deciding the complaint of burnt popcorn was operator error and not the machine’s fault, I told her to unplug anything short of a dialysis machine on the same breaker, and go from there. She popped her goal of 10 batches without incident.

The Weatherly Elementary PTA now appears to be in good fund-raising shape now that everyone will probably be more careful about what is plugged in during corn popping time. But I’m not putting my ammeter away just yet – Word is now that the church’s popcorn cooker didn’t work when they got it back. Tom’s PopcornWerks may just be getting started.