Varmints Are Keeping Me From Green Acres

This year’s Victory Garden is faring poorly at this point. While Kim & I are used to feeding the masses at Sunday School & Alabama games, there have never been any plans to feed God’s creatures in the middle of the night. But squirrels/rabbits/birds are not known for coordinating meals with us. At least the fence keeps out deer.

Replanting the squash, cucumbers & corn once, and the watermelon twice is one thing, but the string beans were crawling up the hemp ropes laid out (front of trellis) quite well until some animal I would like to make tomorrow night’s dinner has repeatedly stopped by to chew stalks off at ground level. I figure there will be no string bean plants left in a week or so. 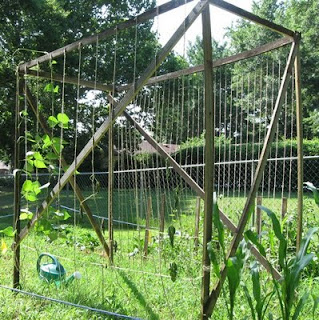 The sugar snap peas (back of trellis), for some reason, are not a target. Perhaps my potential stew meat is waiting for them to crawl further up the trellis. The plants may have a blight, though, and the varmints are simply avoiding an upset tummy.

The tomato plants are, amazingly, looking pretty good. The bell pepper plants are doing okay, but I would have preferred them be a bit taller by this point. I would share more pictures, but I’d rather not consequentially share how badly the garden needs weeding at this point.

I guess my gardening guide from the ‘60s was cancelled before Oliver Douglas had a chance to address varmint control .