Rub-a-dub-dub,
Three wicks in a tub,
And how do you think they got there? 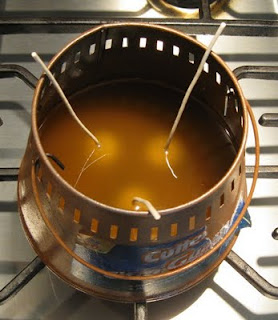 Most everyone familiar with a campground setting appreciates the ability of citronella candles to limit the number of bugs & gnats buzzing about the site. We’re no different, and always have a variety of citronella-based products on hand at every outing.

A few camping trips ago, the workhorses of our citronella arsenal, two triple-wick Cutter-brand candles, suspiciously quit burning at about the same time. Reading the label (which apparently I was supposed to remove before use) the manufacturer claimed “burns up to 40 hours”. While there is little doubt these candles each have at least 40 hours of burn-time, both still had plenty of wax, and this annoyed me because I’m used to replacing candles only when there is little or no wax left to burn.

Wondering if the wicks had been damaged somehow, several dollops of wax were removed from each candle to expose more wick. No joy –neither candle would keep a flame on any of the wicks. We ended up pulling out several smaller candles to fend off bugs during the trip’s remainder.

These big candles are not all that expensive. But since there was so much wax left in both, I hated to just toss them & buy new ones. So Kim bought us a bag of new wicks a few days after returning home, and Tom’s CandleWerks was established at the grill’s side burner. 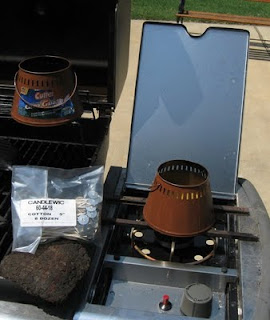 After gently warming the wax, the remains of the old wicks were picked out with pliers. Comparing the old & new wicks, it was immediately clear why the candles had stopped burning – the original wicks had a metal collar to keep the wick from burning past a certain point. These candles had been designed to burn up to 40 hours and no more. 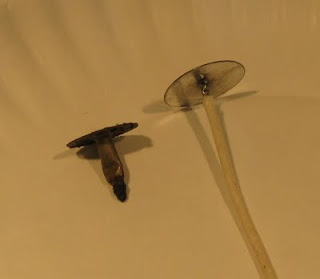 If I was a business man, I would applaud the Company for a novel way of forcing unsuspecting consumers to replace nondurable goods before the good is truly depleted. But in this case, I am a consumer, and my general thought is “bastards!”

The re-wicked candles worked beautifully during the next camping trip.

Even though the only candles I burn are on the campground, the relative easiness of the task, and the 80 wicks left over from the effort, inspired me investigate candle making as yet another hobby. It was a short investigation – It’s considerably cheaper to buy pre-made candles than to make them from scratch.

Just as well; I already do enough things the hard way.