Several years ago, we had an addition to the house constructed which included a new master bedroom & bathroom. Although the size of the old master bedroom had to be reduced to that of a regular bedroom to accommodate a hallway to the addition, the old, small master bath retained its two-sink vanity simply because improving the bathroom was not part of that year’s plan.

In a tribute to how happily married couples work things out, since I am an early riser, I have kept showering in the old master bath just so Kim does not have to listen to me sing in the mornings while she tries to get more shut-eye.

While the shower looks okay, the old double-sink vanity’s general appearance in what is now “my” bathroom has never looked that good, and the gold-colored fixtures were starting to show age. On top of that, neither sink has ever drained particularly well since we purchased the place.

A few weeks ago, going against my normally frugal & minimalist nature, I asked Kim to call up the fellas who built the new vanity top for the Boyz’ bathroom, and get them to build a new single-sink version for my bathroom. She jumped on the request, and within a week or so, the newly made top, graced with the installation of a new faucet, made both of us happy. 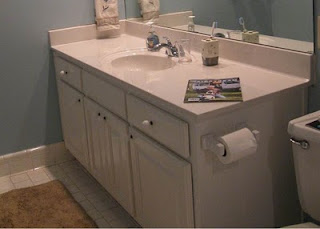 But of course the whole project did not go as fast as it sounded in the above HGTV-like sound bite - There used to be one small drawer in the middle of the vanity to accommodate a sink on either side, and the new, single sink’s placement required the construction of two large drawers.

The Boyz’ bathroom was the opposite case – We went from one sink to two. The extra drawer slides had been kept from that effort (the drawers themselves were too small & nasty to keep), and were recycled into this effort. Fortunately, the Shop’s wood crib had sufficient lumber for the new drawers, and no wood had to be purchased.

There was one change I wanted for these drawers, and that was for them to have laminated bottoms instead of bare or painted wood. Unfortunately, the Shop was all but out of spare laminate, and I did not want to purchase the minimum size of 4’ X 8’ just to have most of the sheet leftover. But the wood crib did have two laminated-plywood sink cutouts left over from other projects which were big enough to fit. The problem was the cutouts were too thick. 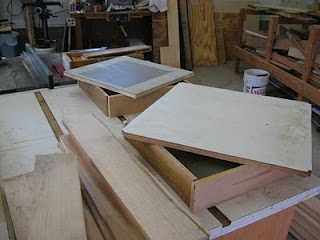 Bathroom drawers are shallow to start with, and the typical ¼” thick plywood bottom sits in a dado ½” above the bottom edge. Were the 7/8” thick sink cutouts to be installed in a similar manner, the drawers would be both unusually shallow and heavy. The cutouts needed to be thinner.

In a move sure to horrify tool purists, the stacked dado assembly was mounted on the radial arm saw, and the cutouts were shaved down to 5/16” thickness. 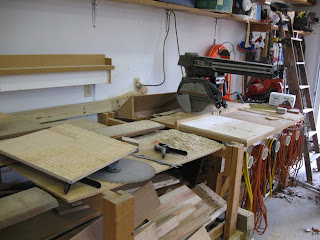 After cutting lock joints & drawer bottom dados on the plywood sides, the drawers’ assembly went without incident, and attention was shifted to the new vanity top’s plumbing.

The vanity in this bathroom has come full circle in that the house was originally built with only one sink in the room. The last owners had the two-sink version installed as evidenced by their name written on the back of what was replaced. The sewer plumbing installed to drain two sinks into one pipe was found to be full of an unusual amount of buildup – It was easy to see why the sinks drained so poorly.

The valve swap-out went smoothly. Unfortunately, when the house’s water was turned back on, the toilet was the first thing used, and all the trapped air in the cold water line shook up the settled crud in the pipes and the debris tried to exit into the toilet tank before finally stopping up the works. Due to the size of the crud, it did not make it much past the toilet’s supply line. Not much of it would shake out. 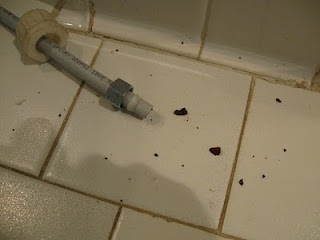 Not only was the hookup tube almost blocked, the crud fouled the shutoff valve so bad that it had to be removed to be cleaned. And there was more where that came from. 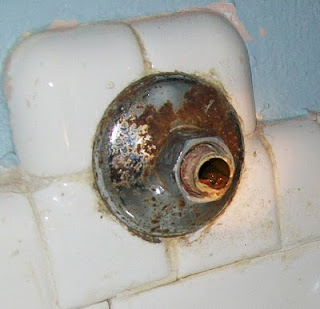 Deciding the next step would be an excellent father-son project, Number 1 son was positioned at the crud filled pipe with the Shop-Vac and telephone. Outside, at the whole-house shutoff valve, I called him on my cell, and the two of us flushed a lot of city-provided debris out of the house’s copper pipes.

The toilet’s shutoff valve had apparently been partially blocked for years, because the toilet now flushes with wild abandon and refills in record time. It was a nice bonus.

Kim is pleased with two large drawers instead of one small one because the convenient storage space should make me more apt to not leave toiletries on the counter. 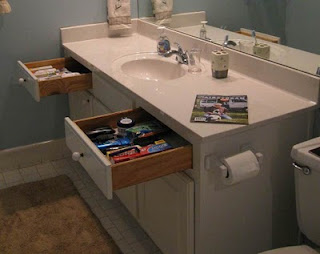 At least for now…