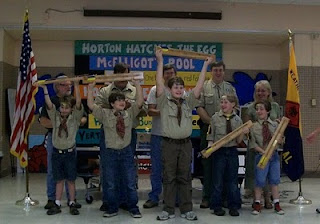 My Webelo Scout son just received his Arrow of Light award, and I could not be more proud of him. The Arrow of Light award is the highest award available to Cub Scouts, and Daniel worked hard to earn it. Awards were presented in a ceremony at last Monday’s Pack meeting, and Daniel officially joined the Boy Scouts in a cool bridging ceremony shortly afterwards. 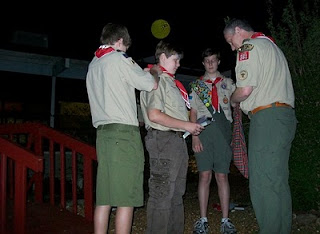 Besides the sense of accomplishment, the award itself is an emblem which a Boy Scout can wear on his uniform. As a remembrance of the event, the Scouts were also each given an arrow mounted on a wooden plaque which listed their name, date, and accomplishment. With my shop-O-tools, I was elected to make the remembrances.

After studying a “go-by” loaned to me from the Cub Master, I decided the base plates would look good made out of the last of the rough-cut maple purchased from Coach Carden many years ago. The three boards had not been used until now because of strategically placed imperfections. But the relatively small size of the five blanks would allow me to cut around the blemishes. A poplar board was added to the to-be-planed pile to act as a real-time prototype/contingency plan since getting enough useable blanks from the maple was iffy.

Oddly, one of the maple boards measured 6/4” thick, and still had a shallow spot at final thickness. 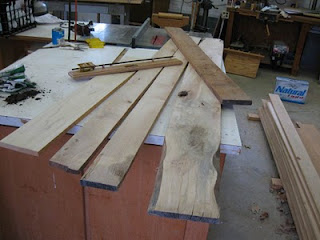 I thought about turning the arrow shafts but someone left an old Univolt on the lathe bed, and it was too heavy to move. 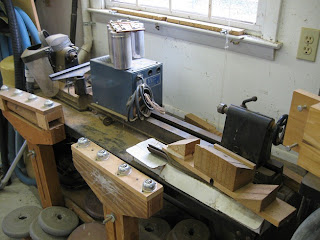 Fortunately, the Pack Master had already agreed to supply the arrows.

One thing that the struck me odd about the remembrances handed out last year was how close one arrow feather was to the edge of the board. I think whoever built it had planned to center the arrow on the board, and then found the brass plate would have been obscured. So the arrow was moved closer to the edge.

Kim ordered the brass plates for our effort, and told me she requested the same dimensions as the go-by. So with that in mind, the boards were cut a half-inch wider and a little bit longer to keep the arrow just inside the edge detail. 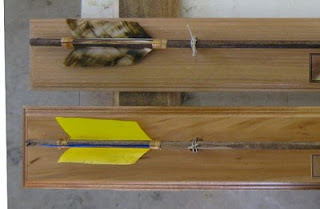 The poplar contingency board did not stain as well as the maple. Fortunately it was not a problem because all five of the maple boards turned out well. 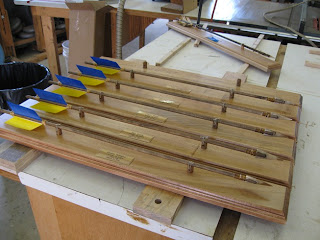 While it was a fun project, and I was happy to help the Scouts out, I will always remember being super-proud of Daniel for earning the award.