A Leatherface Approach to Ornamental Grass 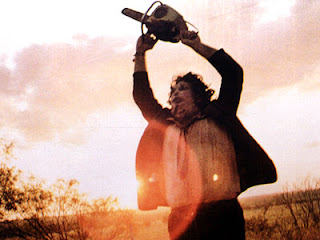 At the start of last year’s growing season, Kim informed me the ornamental grass near the Friend’s Entrance needed to be divided because it had grown large enough to block the lilies previously planted in front of it. I nodded a lot, but neither said nor agreed to anything because my resume already lists an ability to hack tough root balls with a machete/shovel in the inevitable sun for half a day, and I was not interested in refreshing the dates of my garden accomplishments.

This year she told me the same thing, and appeared to have remembered how I got out of doing anything the previous year. So, after a bit of scrambling, I told her that the task could be done with my chainsaw but cutting dirt would ruin the chain.

If or when she should purchase another chain to add to the collection’s rotation, I would divide the ornamental grass. Of course there was also the implied benefit to her of bragging rights, should she divide it herself, of her yard resume being as rich as mine.

A new chain appeared the next day.

One slice with an old chain and less than a minute of shoveling later the botanical decoration had been bisected. 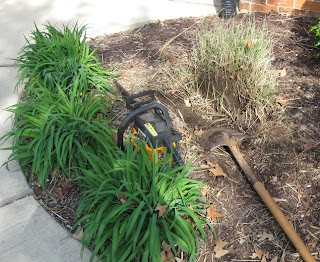 The $20 spent for a new chain was money well spent.