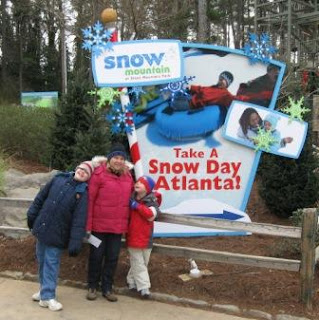 We get very little snow here in North Alabama, and what snow does fall rarely adds up to much. So when Kim found out Stone Mountain Park in Georgia transforms their laser show amphitheater into a giant snow-tubing slide during wintertime, we both agreed the Boyz would really enjoy visiting.

Since playing in snow and camping in sub-freezing weather are two separate things, I was surprised when Kim suggested we tow the Airstream there and stay at Stone Mountain’s campground. Normally I’m the one who takes a sane situation and transforms it into an adventure. After making sure I had heard her correctly, I agreed the trip would make great memories. Kim then set about ordering tickets for Snow Mountain, and reserving the campground site we enjoyed staying at during our Six-Flags trip.

After loading additional supplies to re-winterize the camper for the return trip home, we hitched up & headed out this past Saturday morning in 18 degree weather. 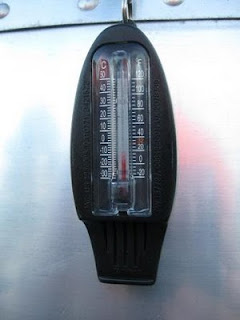 The drive there was warm and uneventful – What the Mighty Burb takes in fuel stops it more than makes for up in interior heat. We had basically arrived when Kim noticed a kink in the master plan. On our way to the check-in building, as we were both marveling at how full the campground was for such cold weather, Kim noticed a trailer occupying the site she had reserved for us. Check-out time was 11:00, and it was now 1:00. Since check-in time was not until 2:00, technically there was no problem… yet.

After pulling up to the check-in station, Kim went in to see what the story was while I took the Boyz to the closest bathhouse for a potty break. Although it was a bit of a trek back to where we had parked, I was surprised to see Kim standing in one of the loop’s campsites with a slightly worried look on her face. Come to find out, she had met our tree-lined campsite’s current tenant at the office. These campers had tried to be out by 11:00 but their water line, and the spigot it was attached to were frozen solid, and could not be disconnected.

Hearing this, Kim asked the manager if we could change to a sunny site. Luckily, it was not a problem, and the site in which she was standing was suggested. Between it being a nice site (being close to the pool as it was it would be a great site in the summer), and the fact that the water spigot worked, we took it.

The site had not been without peril for the last camper though as he had left his busted sewer hose behind. And as a special treat, the hose was found to be full of frozen poo. This unfortunate situation could have been avoided if he had sloped the hose for drainage. But I admit the summer months rarely find me concerned about having the perfect slope on my sewer hose either. Learning from his mistake, I decided to not let the same thing happen to me.

The next time we decide to camp in 18 degree weather, I’ll probably buy one of those fancy gizzidoos for supporting the sewer line. But for this trip, a milk crate, various boards, and indigenous rocks worked quite well for this Kodak moment: 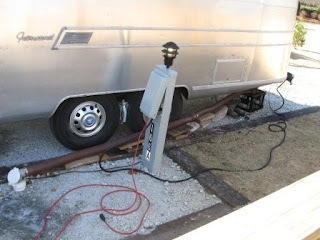 Talking with our neigbors on both sides of the Airstream, our water spigot was now working only because it had thawed in the sunshine after the last family left. Both Ron and Johnny had gone the previous night without water in their respective trailers after their shore water lines froze. Each had made trips to Wal-mart for pipe insulation to hopefully keep the same thing from happening again.

I found it odd that anyone wanted to leave a shore water line connected during freezing weather in the first place. My water hose was connected long enough to de-winterize the plumbing lines, and fill up the onboard, fresh water tank. After that it was disconnected, drained, and put back in the Suburban with the hope that I would not find out the hard way why this approach might not be a good idea.

The evening’s meal of chicken rollups was cooked outside in the new 16-inch skillet my mom gave me for my birthday. As the temperature was hovering around 25 degrees, we opted to forgoe our usual practice of eating at the picnic table. After the dishes were washed without incident, we all retired to the Overlander’s front half to watch one of the Harry Potter movies Daniel received for Christmas.

The next day was all about Snow Mountain. 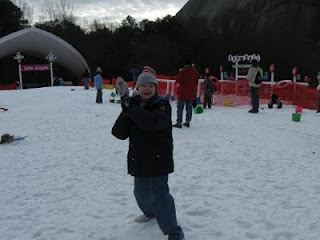 One large area had been set aside for snowball fights and building snowmen. Number 2 son had never made a snow angel before. Judging from the “fun” he was having, I’m not sure if he will make another one anytime soon. 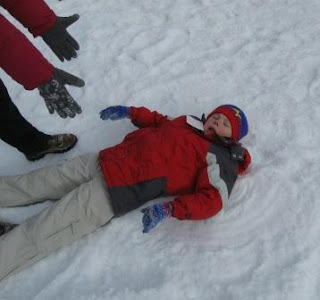 Number 1 son is quick – I don’t think his mom was expecting to have a snow cone on the trip. 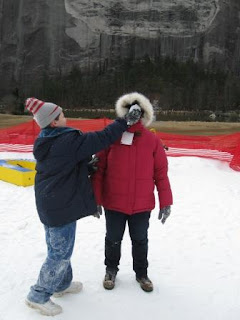 Someone put a lot of effort into the snow slide attraction. New for this year was a moving sidewalk to get everyone to the top faster. 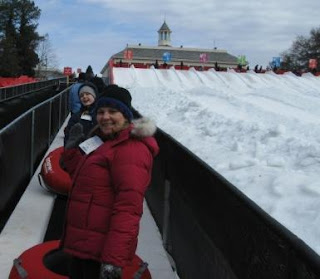 Riders could choose to each ride on a single tube or two could ride together on a two-tuber down the tiered incline. 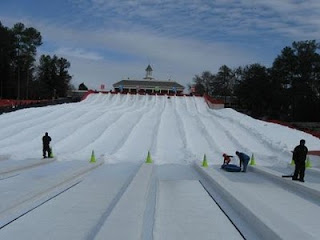 Our tickets (fastened to our coats’ zippers in the pictures above) were good for two hours of tubing, and unlimited time in the play area. Since the place was hopping with people, it was understandable why the tickets specified a time frame. It was enough time, though, given the freezing weather. We had a lot of fun tubing for as long as everyone wanted before heading back to the campsite.

Both Ron and Johnny had packed up & left while we were gone. I felt sorry for them because their sole reason for camping this weekend had been to enjoy Snow Mountain and, in what was a bummer for them, had found the ticket booth sold out. As they were related to each other, they had decided to shift to Plan B - “sit around the campfire & watch football on TV”. That plan apparently didn’t work out too well.

Between the previous night’s dinner dishes, this morning’s breakfast dishes, and the potty being used by four people, I found that we had blown through half of our 30 gallon fresh water supply. While we could probably get by, I didn’t need a crystal ball to foresee more harmony in our home-away-from-home if I was to not badger everyone about conserving water. So out came the hose.

Surprise, surprise – the water spigot had frozen. Luckily, I had brought my MacGyver hat, and after donning it & substituting kitchen scissors for a Swiss army knife, was able to construct a waterpipe thawer-outer with empty water bottles, duct tape, and Kim’s hair dryer. 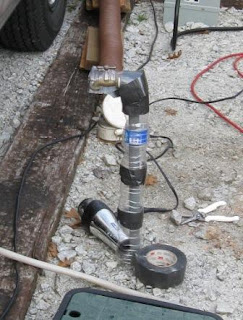 After a few minutes of hi-speed, low-heat air we had running water. 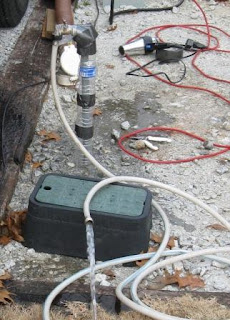 And a spectator. Jerry, an older man whom I had not met up until that point, was camping across the street from us and had apparently been snickering at my activity from his kitchen table while enjoying a snack. When he saw water actually come out of the spigot, he ran over to get a closer look at exactly what I had done to accomplish such a miracle. We ended up having a nice chat about RVing while the water tank filled.

By late afternoon, the campground had just about emptied out. Apparently everyone had come for the weekend-only Snow Mountain attraction. It wasn’t long before we were one of only a handful of campers left on our loop. 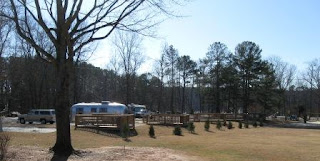 The twenty-something degree weather didn’t deter Jared from the playground though. 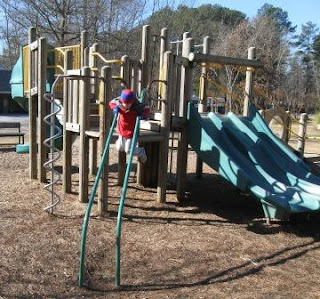 At one point there were some other kids there. Chatting with their mom, I found out their original plan had been to stay the night, but had decided it was just too cold. It was home to Florida for them. I guess it must have been my hearty Tennessee upbringing that tempered me for these frigid temps…walking uphill to school in the snow carrying a hot potato to stay warm…

The final night’s meal was originally planned to be just grilled hamburgers and chips. But at the last moment, supplies were added to make baked beans because Number 2 son appears to enjoy the side dish. It was there that the incident occurred.

While preparing the old family recipe, Kim noticed a distinct cinnamon flavor. Apparently, the small ziploc bag of brown sugar toted along had been left over from a cinnamon muffin breakfast Daniel had made earlier over the holidays. Oops. Jared had the right solution: Add more bacon. 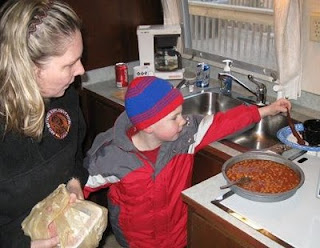 The beans were actually quite tasty, and the cinnamon added a somewhat homey smell to the Airstream while the dish baked.

Mother Nature greeted us with yet another 18 degree morning on departure day. In one last cold-weather camping challenge, I decided everyone would enjoy breakfast more if the pancakes were cooked outside in my new skillet. 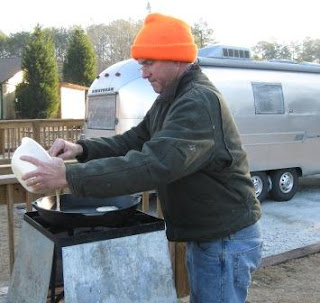 Other than the extra warm-up time required, the experience was totally positive. Twelve pancakes in two batches meant everyone got hot pancakes at the same time.

Breaking camp, as everyone had been fore-warned, took longer than usual as the Airstream had to be re-winterized for the trip home. But since the effort did not include switching off either the furnace or TV during the activity, there were no complaints.

The trip was a resounding success as far as Kim & I were concerned. Other than the pool being closed for the season, the Boyz shared our general sentiment. 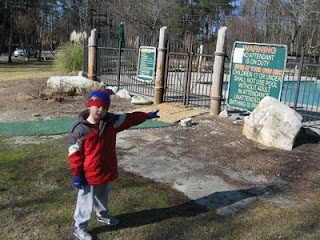 While I’m a little surprised at running through 1-1/4 tanks of propane in two days, the usage was acceptable as it was cold outside.

We could do this trip again.