The Frozen Pipe and Duo-Therm Dehumidifier

Part of my Shop’s original copper plumbing includes an in-ground, water shut-off valve with drain tap. Unfortunately, it only worked for two or three seasons before becoming inoperable. As it looked like a bear to replace, a new gate valve was installed in the house’s crawlspace where the Shop water line connects. That valve worked okay until a few years ago when it quit fully shutting off the water flow. Flirting with disaster, I just stopped shutting off the water to my normally unheated shop during wintertime.

My laziness in addressing the issue finally bit me the other Sunday. After arriving home from an overnight Scouting event with Number 1 son, an unusual wet spot was noticed on the Shop’s brick wall. 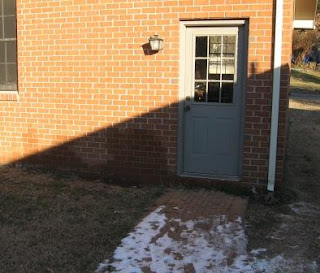 Knowing the Shop’s sink sits behind the wet spot’s general location, the sound of running water greeted me as soon as the door was opened. 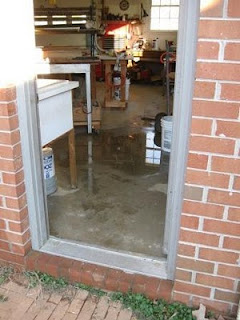 Nothing of consequence on the floor was damaged, though because experience had taught me to sticker everything against floor contact.

Judging by the water’s path, the leak appeared to be behind the sheetrocked portion of the wall. During the Shop’s design phase, I had gone back-and-forth on giving up floor space for a water heater. Ultimately deciding “no”, I had hedged my bet by stubbing out plumbing for either a short or tall water heater. It was apparently that branch of plumbing which had not withstood the last week or so of sub-freezing weather. 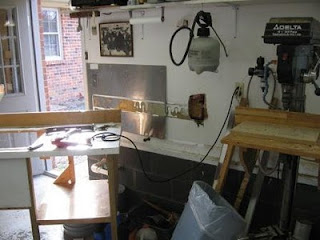 Surprisingly, the copper line itself appeared okay. It was the cap on the cold water side of the ‘short water heater’ option which had failed. 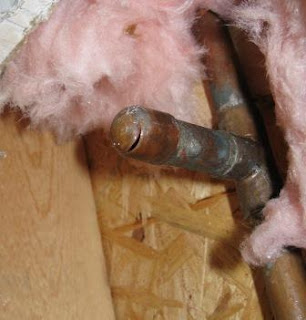 Repairing freeze damage on copper plumbing can be frustrating because copper usually expands in reaction to water inside it freezing. Once the pipe has expanded, new parts will be too small to fit. If that happens, the line has to measured until an unfrozen section, where new parts can be installed, is found.

But since there was nothing to lose by trying, I started by simply prepping a new cap for installation. To my great surprise, after de-soldering the ruptured cap, the new cap slid right on. A subsequent, overnight pressure check of the system with compressed air revealed no other leaks.

Growing up, all I ever heard was “use a gate valve when a shut-off valve is needed”. So that’s what the effort got. That was bad advice because apparently gate valves are notorious for not shutting off completely. Ball valves are more highly regarded, and have the same no-flow-impediment characteristics as gate valves.

The ball valve selected to replace the existing, internally-leaky gate valve under the house also includes a drain tap for the Shop side of the water line. 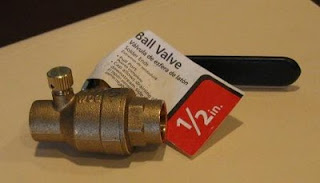 With the new ball valve successfully installed & checked out, attention shifted to repairing the wall so the sink could be reinstalled.

While repairing the hole in the wall was no big deal, the issue which had to be addressed first was getting the sheetrock dry enough to accept the patch. It was too cold outside to simply open the doors. Although the Shop’s heat had been on all through the plumbing repair, the moisture had nowhere to go. What I needed was a dehumidifier. Duo-Therm to the rescue?

Several weeks ago, an Airstreamer on Airforums replaced his questionable, Duo-Therm, RV air conditioner with a new unit, and posted his old AC as “free to a good home”. Between wanting to have a refrigeration unit laying around the Shop for certain science experiments, and wanting to meet Rodney, I posted I would gladly come get the unit if no one else wanted it for their Airstream.

I ended up being the lucky recipient, and it was great meeting & visiting with Rodney. As he was currently laid-over in the same county I grew up in, it was nice seeing some areas I had not seen in over 20 years. They’re four-laning the Woodbury highway now, and it was a mess… Kind of like the Duo-Therm’s exterior shroud. 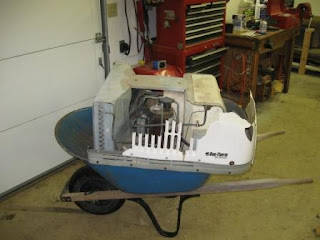 For an air conditioner made in 2001, the shroud certainly hadn’t aged well. The shroud on my Airstream’s Bay Breeze unit when I got it, while in need of repair, looked better than the Duo-Therm’s, and my shroud was 36 years old at the time. But since my plans for the unit never hinged on cosmetics, there was no problem.

The 13,500 Btu unit fired up with no complaint. But after a while, the evaporator coil, return line, and receiver/dryer froze up. Low Freon level is usually the culprit when this happens. 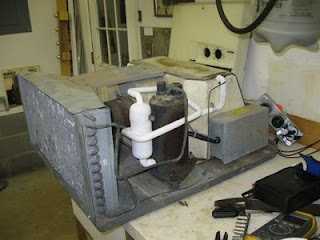 Now, the original plan for the day had been to use the Duo-Therm as a dehumidifier. With this in mind, buckets were placed underneath the two holes condensation was supposed to drip from. But when the coils thawed, water ran from every nook & cranny. So the Duo-Therm was moved to a test stand for a more extensive checkout/possible repair.

RV air conditioners, as they are mounted on a rooftop, both draw and exhaust air from the bottom. Wondering if the freezing was a result of the two streams mixing too much due to the diffuser panel not being mounted, the sheet metal covering the evaporator coil was removed to allow the air drawn into the coil to come from the front while cold air was blown out the bottom. 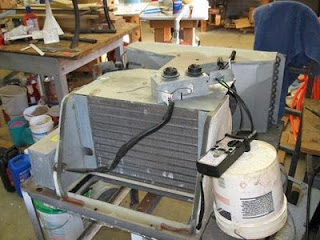 Even if I had a set of R-22 gauges with which to check Freon level, the gauges would not have worked with this unit as this system, like most RV systems, is sealed (no fittings for gauge hookup). After allowing the unit to run for awhile, neither the evaporator nor condenser coils were found to have a uniform temperature distribution - another sign of low Freon. But the evaporator coil was not icing in the unit’s new configuration.

My ammeter reported the unit was drawing 11-1/2 amps on high-speed. Since the value was below the Rated Load Amps of 12, I checked that off my list, and proceeded to check differential temperature between incoming, and outgoing air. 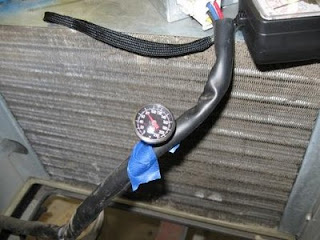 An air conditioner in good repair will usually provide a 15-20 degree temperature differential. After recording the inlet temperature, the thermometer was moved to the outlet. While waiting for the temperature to stabilize, the condensate once again started leaking out of everywhere. While looking around and touching this-that-and-the-other, the condenser fan blade sucked the end of my left-hand ring finger into its path, and half of the fan blades snapped off. 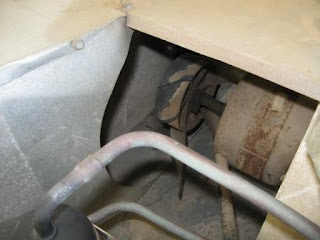 A distinct rotational imbalance was immediately detected, and checkouts were stopped as the unit appeared to want to vibrate off the test stand. I wish I hadn’t been so busy counting my fingers as I really wanted to know the final outlet temperature.

So much for having a dehumidifier. But, with only a cut on one finger, I ended up in much better condition than the Duo-Therm did. It looks like I’ll just have to wait for warmer weather to dry the place out.