The Mighty Burb gets some TLC

My vintage ¾-ton Chevrolet Suburban works hard during the camping months hauling our Airstream and us anywhere we want to go. Whether it be the slow, steady grades of the Smoky Mountains or the humid heat of Florida, this workhorse meets all comers, and always gets us safely gets us to our destination with no problem. But even workhorses need a little attention every now & then, and after a few “that’s odd” experiences over our last two camping trips, it appeared to be time to take a look under the ‘Burb’s hood. 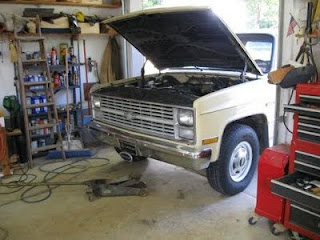 An under-hood exhaust noise, which used to go away after warm-up had been getting noticeable under moderate acceleration. This noise had been ignored because, without looking, I assumed worst case - a cracked exhaust manifold. 454 cid engines are notoriously tough on exhaust manifolds, and I had personally installed a new RH manifold on this truck several years ago. From the noise’s location, there appeared to be a problem with the LH manifold.

But after all that worry, the noise went away after the installation of a new manifold gasket.

Heartened by a cheap & easy fix, my attention shifted to figuring out why the brakes occasionally pulled to one side during a sudden stop. When that happened, the steering wheel would sometimes shake back & forth slowly like there was a bad steering damper in the system (my C20 doesn’t have a steering damper).

Although the front brake pads had just been replaced less than 20,000 miles ago & still had plenty of meat left, the LH pair was found to be wearing at an angle. Also, the caliper on this side had a big blob of what appeared to be ball joint grease sitting on top of it just ahead of the inboard pad. My working theory is that heat from the pads would occasionally melt the grease, and the grease would get on the pad and make it more susceptible to wear. Keeping in mind that it may have also been due in part to inferior pads, new Wagner-brand pads were installed.

While checking steering linkages for relative play, the LH tie-rod assembly was found to have looseness at the inboard tie-rod end’s turnbuckle, even though the pinch-clamp appeared tight. Luck was on my side again as the fix was as simple as cleaning the works & repositioning the pinch-clamp.

Although none of the odd things which had happened lately appeared to have anything to do with the front sway bar, judging by the shape of its rubber bushings, the sway bar had not been correcting for much sway lately. So four new neoprene bushing were installed

During the subsequent test drive of these repairs, I thought I was a in a different truck. The under-hood exhaust noise was gone, and the new sway bar bushings’ contribution was immediately noticed in the two curves encountered leaving the neighborhood (and I wasn’t even going that fast). The brakes appeared to work fine, but it’s best to get a hundred miles or so of wear on the new pads before seeing if the ‘sudden stop’ issue has been remedied.

Inspired, I decided to tackle the last thing on my list – new front door hinge pin bushings. Both doors had been getting hard to shut over the last couple of seasons, and a wiggle test showed play in the hinges. Play in the hinges would allow the doors to sag & not line up with the striker bolt. The actual work of re-bushing the hinges is not that tough. Removing & reinstalling the doors, due to their deadweight, is the kicker.

My solution to supporting the doors’ deadweight was to place a ¾-inch black iron pipe between a ladder and a wood box placed on top of the Suburban. A ratcheting motorcycle tie-down was then wrapped around both the pipe, and the door. After pin removal, the door just dangled in the breeze until the new bushings were installed. 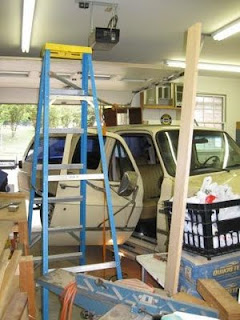 Oddly, while the bushings were worn, they weren’t worn as bad as I thought they were going to be. And, to my great annoyance, the doors did not shut that much easier after the new pins & bushings were installed. After looking the “repaired” state over, apparently, the doors had just sagged from old age. So the hinges were adjusted to compensate. All is now well; the doors now shut like they’re supposed to.

The Mighty Suburban is now ready for the last camping trip of this season. I’m still trying to decide the exact location, but somewhere there is a State Park we have never been to waiting for us to come and enjoy building a campfire every night.