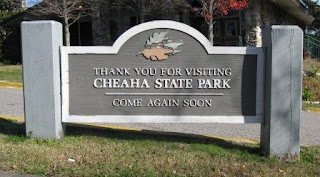 After returning from Disney World last month, I mentioned to my wife that I wanted to get one last camping trip in for 2009 before winterizing the Airstream, and it needed to be a cool-weather outing for various reasons. Our discussion, due to her lack of enthusiasm, was brief. Enjoying autumn’s colors is one thing; standing out in the cold is another. But, she didn’t say no.

A few days later, Number 1 son asked me what I wanted to do for my upcoming birthday. The Boyz' birthdays, at their request, are usually celebrated by staying overnight in a nice hotel, and eating at the hotel's restaurant. With this in mind, I told Daniel that I wanted to go camping at a never-before-visited State Park at, oh let’s say within a 100 miles or so of home. If he wanted to get involved, he could map out a destination for us. His eyes lit up, and he ran off to his computer to see what Google suggested. Kim pleasantly got onboard after finding out I had designated the outing a birthday celebration, and she & Daniel mapped out Cheaha State Park. Her serenity makes me wonder what we’ll do for her birthday.

The mighty Burb seems happiest when hauling a lot of stuff. So, for the two-night & one-day trip, the Weber grill, turkey cooker (for the 14-inch iron skillet), 20-lb bottle of propane, and a wheelbarrow load of firewood were loaded in addition to the normal camping gear. 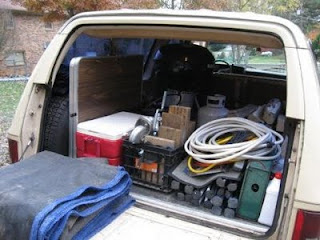 Even with all that, I could still see out the rear window. Not that I could see anything but the Airstream, though.

As expected, since there weren’t many campers there, we had a lot of nice sites to choose from. The one directly across from the playground appealed to everyone. 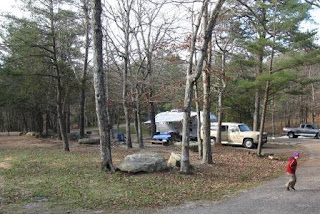 The Boyz lucked out on this trip because another family with kids around their age pulled into another playground-accessible site shortly after we did. Everyone seemed to enjoy playing together. 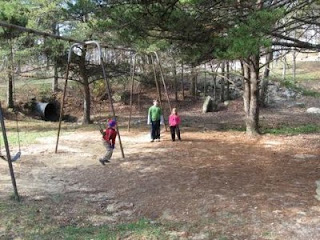 Dinner that night was chicken roll-ups cooked outside in the 14-inch skillet. This meal is getting so popular that I need to think about getting a big skillet just for the Airstream to preclude me from forgetting to pack the house’s big skillet.

Cheaha Mountain is the highest point in the state of Alabama, and as such is home to several antennas. Oddly, none of them belong to cell phone companies. As a result, Kim had to go on patrol in the Suburban in search of cell phone coverage to make a phone call to her mom. Even though we have had the truck for 14 years, I still find it odd to see it moving without me at the wheel. It’s cool to listen to, though, with its factory dual-exhaust with no cross-over pipe. 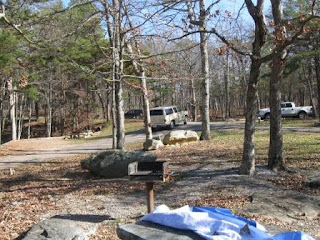 After she returned, Jared and I went on foot patrol to see who else was enjoying camping in the cool weather. Seeing pitched tents reminded me of how much Kim & I used to enjoy tent camping many years ago. Ah, the days of the Coleman stove. 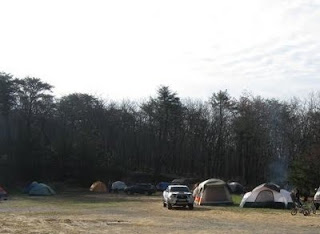 Nowadays, the allure of the Airstream with its heater and indoor potty is too strong to escape. One gets spoiled very easily. We still have all of our tent-camping gear, and will never get rid of it. From now on, though, the only use it will probably see is when the Boyz and I go on Boy Scouting functions. Preferably in warmer weather.

Yes, there was a pool. But as expected, it had already been covered for the season. Built on the side of the mountain, the pool’s view of Cleburne County is spectacular. 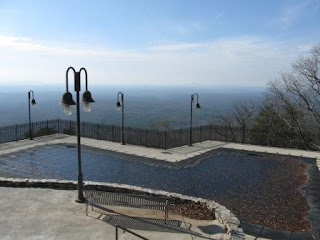 The campfire was one of the reasons I wanted to visit in cool weather. There is nothing like sitting next to one contemplating nothing. Unless you’re Daniel, and have gotten tired of constantly moving away from the smoke. Or you’re Kim, who found the Crimson Tide rolling over UTC on television had a higher appeal for that part of the afternoon. 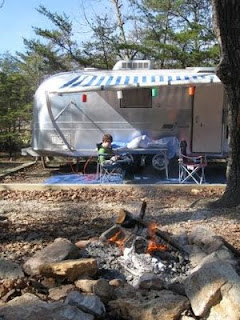 No complaints, though – everyone appeared to be enjoying themselves.

Between playing on the playground and riding bikes, the Boyz definitely got their fair share of exercise & fresh mountain air during our visit. 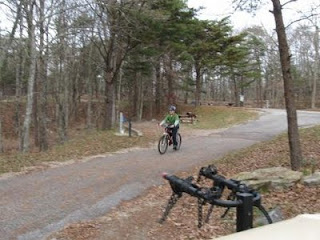 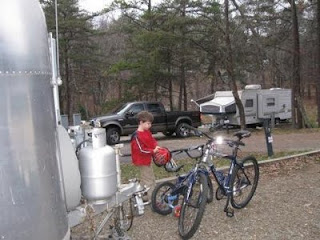 After a wonderful day, and a great meal of grilled burgers and s’ mores, we all turned in just before it started to rain. For the most part, it was a gentle rain, and was quite pleasant to listen to inside the Airstream.

Unfortunately, the rain continued past breakfast on departure day, and we had to break camp with umbrellas. Luckily, though, it was not that cold. The drive home was a bit more eventful than I really wanted because my trailer brake controller appeared to occasionally malfunction leaving the mighty Burb to do all the braking work. Good thing this was the last trip of the season – There’s plenty of time to diagnose & correct the problem before the next trip.

Our visit to Cheaha State Park was, I think enjoyed by all, and was a great end to the 2009 camping season. The End.

But wait – you guessed it: There’s more!

After we had unloaded the Airstream & all the wet stuff from the Suburban, there was a knock at the door. My parents were in town to do some unannounced shopping, and had gambled that we might be home for a post birthday gift bestowment. I’m really happy we were at home because I’m simultaneously thrilled & dumbfounded with what they brought. With absolutely no pre-coordination of any sort, my mom presented me with a 16-inch cast iron skillet for the Airstream. Here she is with both the house’s puny 14-inch skillet, and the Airstream’s new 16-incher. 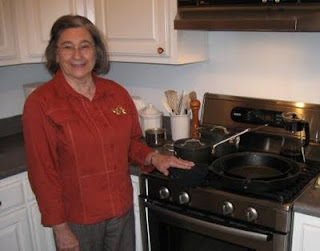 Never underestimate the ability of mothers to sense what will make their kids happy. Thanks, Mom.

This past week has certainly been “Happy Birthday to ME”.