You take the Wi-Fi, and I’ll take the No-Fi 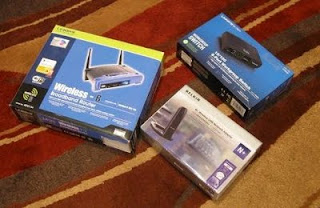 Many years ago, my wife’s office assigned her a laptop computer to allow her to get some of her work done at home. As the laptop was Wi-Fi enabled, they also came over and set up a wireless router so that she could work from anywhere in the house and not interfere with our home’s desktop PC. Later, when the Boyz wanted a computer in their end of the house, a USB Wi-Fi adapter was purchased for their computer to save me the hassle of running an Ethernet cable from one end of the house to the other. The signal was weak, but it worked.

Last year, my wife’s office, apparently worried about commies sitting in our driveway sniffing Wi-Fi signals, disabled her laptop’s Wi-Fi capability which meant she now could now only access the Internet via hardwire connection. This put us in a bind because there is only one desk (located in “Tom’s room”) she could sit at and plug into the Internet. Faced with either building/buying another desk or running Ethernet cable under the house, the latter course was chosen primarily because I was curious about what the task entailed. 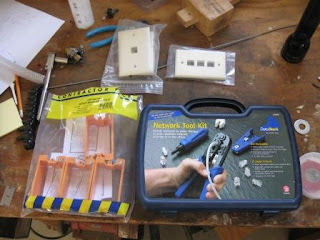 Two, new Ethernet wall jacks, one in “Kim’s room” (where her scrap-booking table is located), and the other in the master bedroom, were added. While not enjoying as much freedom as a wireless connection offers, Kim now had connectivity in both functional & comfortable rooms of the house. All was now well, and other than having to crawl around under the house (which by the way was dry), wiring Ethernet connections was kind of fun.

A couple of weeks ago, Number 1 son complained that the Internet was not working at his computer. Hoping it was a moon phase issue, I successfully blew off the issue until he kept showing up at my computer to get his schoolwork done. Investigating, his wireless Ethernet adapter was found to be rattling. Both Boyz were grilled as to what may have happened to cause this formerly rattle-free device to now rattle to no avail. While I’m sure Ward Cleaver would have found out the truth, I just lectured the Boyz sternly about being careful around the computer, and bought a new Wi-Fi Ethernet adapter.

Connectivity bliss was restored for a few days before it was determined that the new, N+, Wi-Fi adapter was not getting along well with the existing [old] wireless router. And, as luck would have it, Daniel had a sanctioned computer task that absolutely needed Internet access. So, as an immediate fix, I ran an Ethernet cable across the hall from “Kim’s room” to where the Boyz’ computer is. It was a simple, yet elegant… trip hazard; what to do next? New router? Different adapter?

C) – None of the above. I still had enough wiring & connectors left over from securing Kim’s work Internet traffic from prying eyes to run a new Ethernet connection to the Boyz’ playroom. Overhearing me talk about wiring new Internet connections with his mom, Daniel perked up, and started talking about the virtues of having his Wii, which is currently connected to the den’s television, connected to the Internet. The boy appears to be a natural salesman and his mother & I both agreed that connecting his Wii to the Internet was not necessarily a bad thing. Plus, a 52-inch computer monitor does have a certain ‘cool’ factor to it. 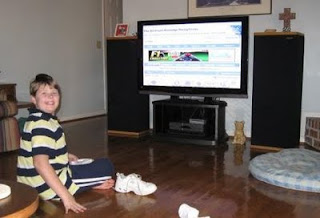 All this new wiring was accomplished this past weekend while Kim was out of town scrap-booking with her girlfriends. Not that he needed much time to figure out how to get the Internet to work with the Wii, Daniel took extra time to master reporting the weather, one of his mom’s favorite subjects, on the big screen. 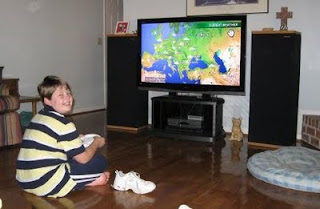 I predict he will grow up to do well with the ladies.

Stay tuned – It looks like Cheaha State Park will wrap up our camping season. Trip report to follow.