Getting Ready for Winter

.
I still remember the angst of winterizing my Overlander for the first time. Even though RVing was new to me, common sense was not, and the owner’s manual recommendation of simply opening the low-point drains and raising & lowering the trailer via the tongue jack seemed fraught with peril. While the topic was never discussed with the previous owner, the discovery of three, patched areas on the Airstream’s copper plumbing leads me to think he may have started & ended with the owner’s manual.

Luckily, the Internet is full of everyone else’s thoughts on the matter, and many good ideas were found. After seven uneventful de-winterizations over five years, the time seems right to add my approach to the archives.

The 15 gallons or so of fresh water we travel with for emergency potty stops had to be emptied first. 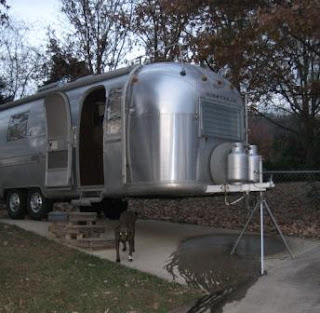 Shop air @45 psig was then connected to the shore water fitting to blow the water out of the lines. 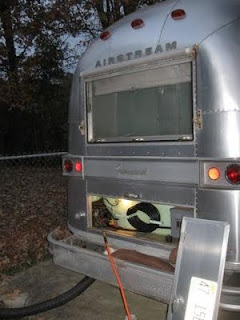 I am surprised my original, 1967 water heater is still cookin’ up hot water. They don’t make ‘em like that anymore. 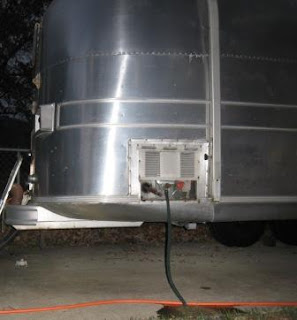 I only expected to get a season or two out of the water heater after the refurb, and planned to add a bypass valve (for easier winterization) when the unit was replaced. Five years later, I’m still plumbing in a bypass pipe every time as part of the effort.

Getting ready for winter now includes pulling out & starting my generator collection to give them a better chance of starting when actually needed. Each generator was started, and allowed to idle for a few minutes before being hooked up to a load. The Honda ran a 1500 watt space heater and the Generac a 3000 watt wall heater for around 15 minutes. 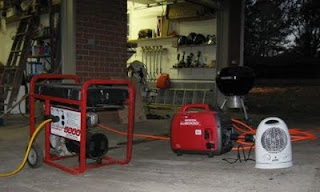 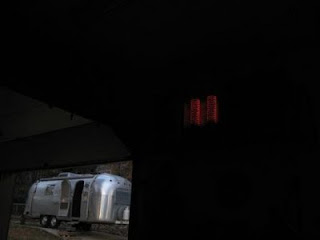 I screwed up on the generators’ starting order. For whatever reason, the Generac was started before the Honda. THE GENERAC WAS SO DOGGONE LOUD THAT I COULDN’T TELL IF THE HONDA WAS RUNNING. I had to switch the Generac off, start the Honda, and then re-start the Generac. I sure hope Marcus trades me soon – my ears are still ringing.

Other details got in the way of finishing the afternoon’s effort, and the anti-freeze flush was postponed until the next day. 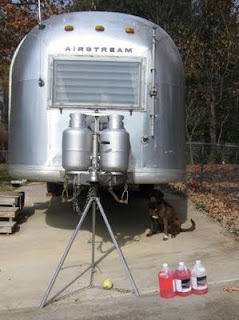 Our very first camping season was short, and enjoyed without the benefit of a fresh water tank. The Airstream’s original PAR water pump was used to pump the anti-freeze through the lines via the shore water inlet. All subsequent winterizations have seen the 2-1/2 gallons of propylene glycol poured into the empty fresh water tank. The faucets, spray nozzles, and toilet are then individually turned on in short intervals until the tank runs dry. The used anti-freeze is not collected, but allowed to run down the drain to protect the P-traps. Some people like to recycle anti-freeze for next year’s effort. I’m not fond of the idea primarily because the anti-freeze gets diluted while collecting pockets of water. Dilution negatively impacts the freezing point. Biological fouling of the used stuff while it sits on the shelf for a year is another consideration.

Afterwards, shop air is again used to blow the remaining anti-freeze out since I figure there’s no good reason to let it sit there flavoring the lines.

We noticed some sugar ants on the last two outings, and now seemed like the perfect time to do a thorough spraying. 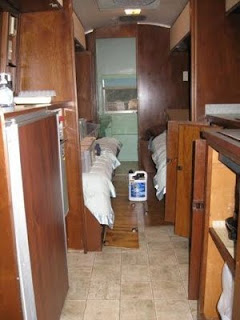 So now the Airstream’s good until next season. It will be a short wait though – We’re headed to Snow Mountain at Stone Mountain Park January 2. I’m glad the furnace was checked out on this year’s season finale at Cheaha State Park!