Better Curves for the T&K Railway

My O-gauge ceiling railway was originally designed for 27-inch radius curves simply because that was all the curvature my childhood’s Lionel 2034 locomotive and cars required. In time, though, I found it difficult to expand my rolling stock collection because everything on my wish list required O-31 curves or better. Fortunately, O-31 curves just fit the existing shelving built for the railway which allowed me to do nothing more than swap 0-27 curves and track with the corresponding O-31 version.

All was relatively well until Bill, one of my wife’s co-workers, after learning of the railway decided to loan me some nice locomotives & cars he had in storage because he now did not have access to a model railway. Unfortunately, some of his collection would only run on O-42 or better curves. Since a really cool Shay locomotive was one of those items, the decision was made to modify the T&K’s shelving to accommodate 0-72 radius curves since that curvature appears to be the largest in regular production.

Due to the amount of shelving which could not be aesthetically attached to the walls, four pieces of ¼-inch All Thread per curve was incorporated into the design. As before, the new design was drawn up in AutoCAD. 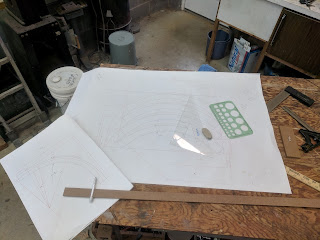 Last time, each of the four curve sections were individually cut out and shaped to final dimension in assembly line fashion. Since the whole operation could have gone a lot better, this time I decided to make a pattern out of 1/8-inch hardboard and use a template guide on the router to mill the four, 5/8-inch MDF shelving curves from the pattern.

There has never been a point in my woodworking career, up until now, to draw 5-foot and larger radii. Fortunately, a yardstick compass will work once the yardstick is swapped out for a really long piece of hardboard. 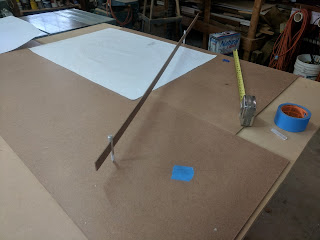 After completing all the construction lines, the new track itself was laid on the proposed template for a quick sanity check. We’re good. 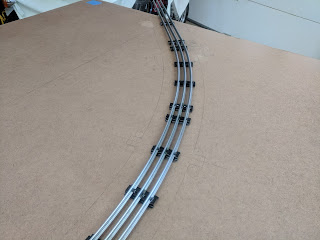 Unlike drawing large radii, I have routed large curves with a homemade jig. The jig was frustrating to use because each different radius required a new pivot point hole to be drilled in the jig. Getting past this stumbling block was a little more problematic because the longest, store-bought router compass I could find only did 24-inch curves. So two, long sections of 1/8-inch hardboard were glued together and milled to match the important dimensions of the store-bought version. Then the store-bought version’s hardware was remounted on the homemade version. 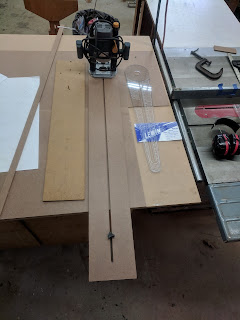 The result was a really easy to use, long router compass. 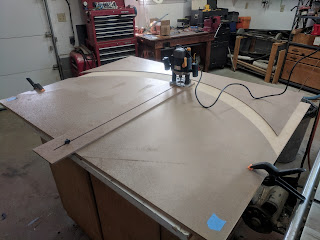 The tabletop drill press, mounted on a special stand & fitted with various Forstner bits, was used to provide radiusing on the inside corners. 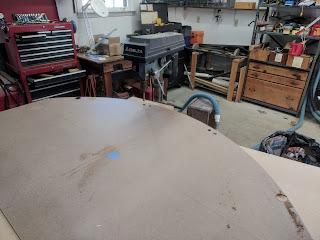 After the master pattern was cut out and touched up with a drum sander attachment on the drill press it was used to rough out the four corner blanks. 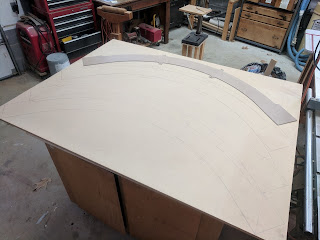 The blanks were cut proud of the construction line with a jigsaw. 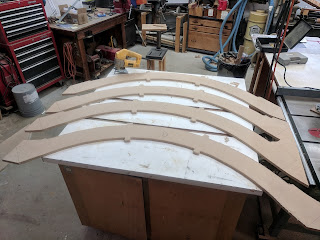 Then the ends were squared off with the radial arm saw. 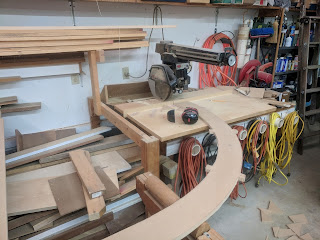 With compass routing complete, the router was refitted with a template guide collar. 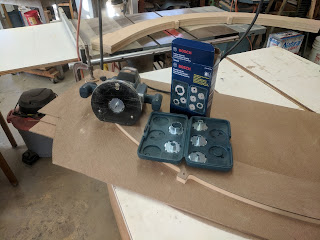 Then, with the template C-clamped onto each blank, the router was run around the perimeter to establish the final dimensions. 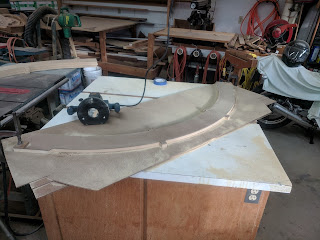 Next stop was the router table fitted with a round-over bit. 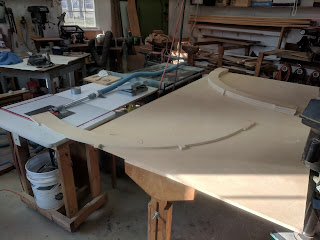 Soon afterward, the O-31 track & associated track wiring/lighting was removed for test fits. The new O-72 curves will be a big improvement over the ones originally designed for O-27.

Portions of the old O-27 shelving were cut out by jigsaw, small circular saw and hand saw. A 2X4 stand helped support the new curves for fit checks. 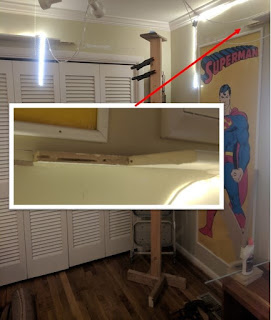 All empty biscuit slots and holes were then filled with wood putty. After fit checks, the new curve sections were returned to the shop for pocket holes. 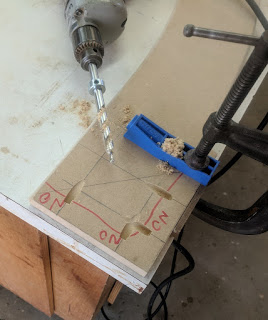 Since I elected to leave the track wiring and LED lighting in place during the upgrade, it was taped off while the new curves were installed, caulked, primed, and painted. 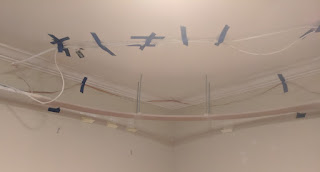 My little ¼-inch right angle adapter has paid for itself countless times with tasks like drilling pilot holes in tight places.

I was very happy with how it all turned out:


Now to see what else Bill has! 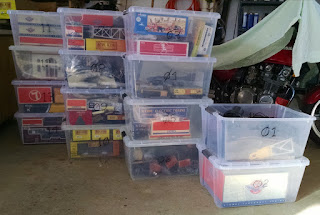