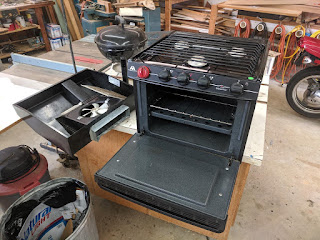 My 1967 Airstream still has its original Magic Chef oven which we use at least once on every camping trip.  It has been amazingly reliable with repairs usually consisting of realigning something that vibrated out of place.  But one day I know a No-Longer-Available part will have to be replaced.  A new oven might be necessary.

The immediate problem is that no one makes an RV oven anymore – they only make ranges.  While a household wall oven would probably work, it will require 120 VAC for the electronics which may not be available depending on what type of camping going on.

Adapting modern-day RV oven parts to my half-century old oven seemed to be a reasonable avenue to investigate.  The issue here is that I have never used a modern-day, RV, gas oven to understand the differences between then-and-now operation (the Airstream’s oven has what is essentially a two-pilot light system[1] whereas modern ovens only have one).  It would be nice to play with a modern one to compare differences.

As much as we enjoy using our oven on camping trips I read that others do not apparently preferring a microwave instead.  So I was not surprised to see an RV range and hood for sale at a yard sale the other weekend.  Although it was noticeably smaller than my Magic Chef, it looked like a good “leaner” oven if the price was right.  It had obviously not been used much, and the yard-seller said it worked when removed.  Fortunately for me he was happy to mark it down to $20.

While hooking the gas up I noticed it was made by Atwood Wedgewood in 2005. 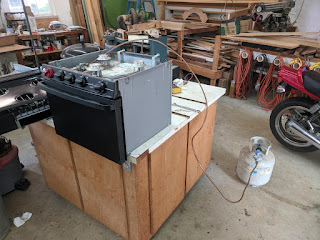 In what was no surprise, the three cook-top burners lit without incident; even the piezeo-electric sparker, a modern day feature to me, worked.  After a short line purge, the oven lit too.

While the oven was pre-heating, research on the range showed this model is still in production and sold new for around $500.  It was sold as a 17” range and has a big brother, 24” version.  Each uses the same thermostat and burner.

The Atwood’s burner is made of sheet aluminum alloy and has much less heating capacity & lower latent heat retention than the Magic Chef’s much larger cast-iron burner.

The broiler area was certainly no frills compared to my antique oven.  But, in reading camping forums, I noticed few people even know how to brown food in a gas oven.

The thermostat was found to be wildly out of calibration with no provision for adjustment.  But after bumping the temperature up and adding some stones to stabilize the heat, the oven produced a decent pan of cornbread. 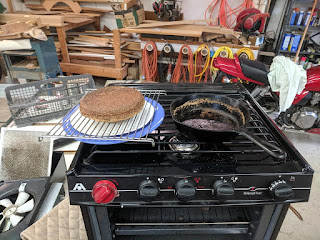 The Totino’s cheese pizza cooked later came out surprisingly bad.  The lower rack position was used instead of the other, higher one which resulted in a “highly browned” bottom and uncooked top.  The top had to be broiled to make sure the cheese was melted. 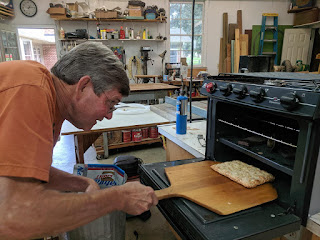 It was now starting to dawn on me why some RVers did not use their ovens: the 17” version is just too small for some routine cooking tasks.  Unlike the Magic Chef, a half sheet pan will not fit.  Quarter sheet or smaller pans only.  Even with a few cooking stones, heat control is poor.  The mass of the cast iron burner in the Magic Chef coupled with the Robertshaw thermostat is tough to beat.

If push came to shove, the thermostat could be adapted but it would be a lot of work because its design made it integral to the range’s gas distribution bar.  Adapting the thermostat to flared pipe fittings would not be fun.

But keeping the limitations in mind it has been fun using the range for overflow cooking.  In fact, I made Granny Smith apple pie filling from scratch just to see how it do in the Atwood. 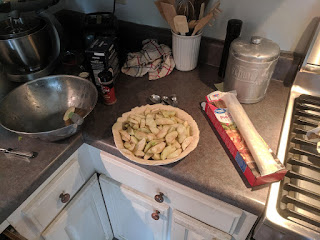 It turned out amazingly well and was a hit with everyone. 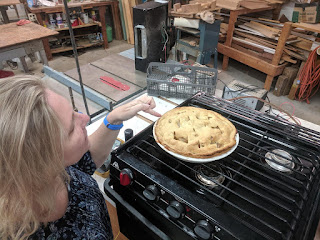 Cooking the pie out in my shop ended being good in an unexpected way – Per direction the glass pan was placed directly on the rack.  When it unexpectedly boiled over the syrup dripped on the metal plate dispersing the burner’s heat.  Smoke ensued in very short order and continued until a drip pan could be located/installed.

All-in-all, not counting entertainment value, a lot was learned for $20.  For now I think the range will be mounted on a stand and kept intact for overflow cooking in the summer.


Note [1]
My Overlander's '67 Magic Chef operates differently than modern ovens. Lighting the pilot light does not involve pushing & holding the knob - I just turn the knob to pilot, wait for the gas to run through, and light it.

On occasion, the secondary thermocouple vibrates out of position has to be re-aligned or the main burner never lights.