Construction of the T&K Railway


Like many kids of the Apollo era, I had a simple model train layout which brought me many hours of entertainment.  Unlike most kids, though, I hung on to mine in a disassembled state with the plan of one day building a track shelf around the top of a room in my own house on which the Lionel could run.

The project languished primarily because all the designs I came up either had some sort of shelf bracket or looked too bulky.  I almost got really serious about completing the dream around 19 years ago when a yard sale provided me with several sections of three-foot track for a great price.  But the bargain was eventually quietly stored away with rest of the train set.

A couple months ago I woke up and for some reason decided to get serious about the project.  After less than an hour on the Internet I found a company marketing a product which had the right visual appeal.  They were quite proud of it too because their online estimator came up with close to $1500 for the parts which I & a helper would have to trim & install.  Then my own track would have to be installed on top of it after painting.  Ka-ching!

But after studying their low-res pictures for a while, I decided to build a version of their product which would look even better than they offered due to the way my idea would be mounted to the wall.  So, after a long time sitting in a box, what was left of my 1952 Lionel train set finally saw the light of day to get measured for its new layout. 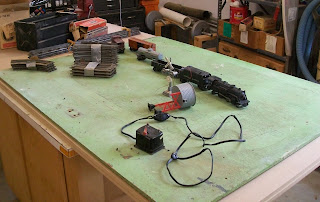 I would have chosen MDF for the project even if it did not appear to be what the high-priced guys were milling.  After studying & measuring everything, what appeared to be good proportions were established before drawing up plans. 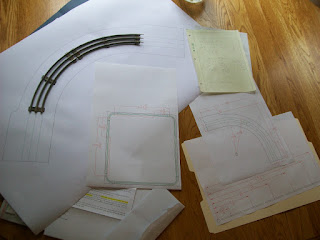 The curves were the toughest parts to conceptualize because the parts have to be anchored to both the wall & straight sections of track, and look good doing it. 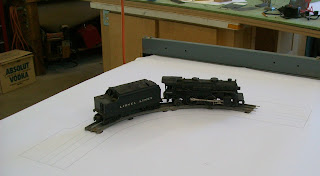 After the meat of the design was done, I took one last look around the shelf’s future home to identify obstacles.  While a wall-mounted smoke detector would be easy enough to relocate, the cuckoo clock really needed to be at the height it is.  Ultimately, a stand-off was constructed to allow the train to run behind the clock. 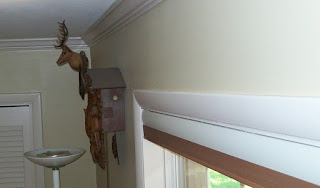 As with the start of any big project, all the Shop’s cast iron was waxed before verifying all cutting tools were properly aligned to their respective work surfaces.  Funny how you never see this time-consuming part on home improvement shows. 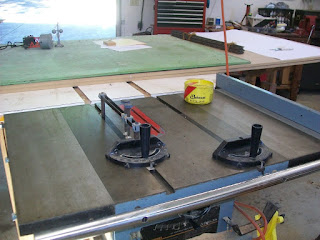 The radial arm saw was used for the bulk of the cuts: 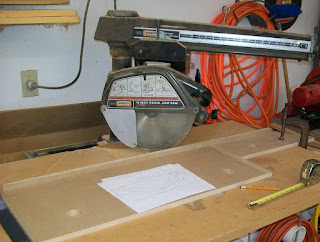 Although the finished curved cuts came from a router on an arm, a giant compass (pencil on the end of a pinned board) was used used to mark the path. 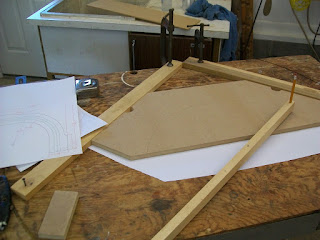 The bandsaw took most of the excess off so that only one pass of the router would be necessary to finish it. 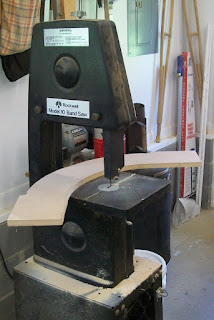 Well, they say that part of the joy of woodworking is recovering from mistakes & accidents.  “They” say that; I don’t.  While routing the the very first arc, I heard the router load up.  Although I immediately stopped, the damage was done.

The work had fed itself into the router bit because it was only constrained from getting away from the router as opposed to drifting into the bit.  Since all forms of trying to aesthetically recover from so much missing wood looked fairly time consuming, I opted to mill out another blank.  The benefit was that I now had a sacrificial curve to verify the remaining milling operation setups.

Fortunately, milling of the remaining curves and all the straight sections went without incident. 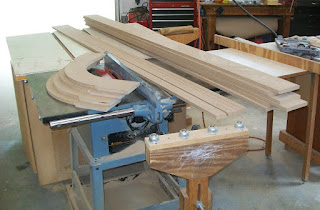 The next step was rounding over of exposed sharp edges. 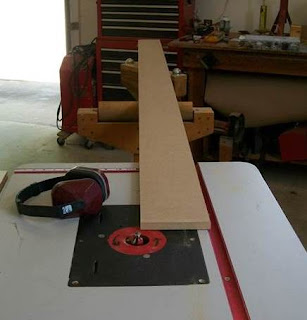 With what I thought was all of the edge treatments done, the roundover bit was swapped out with a straight bit for the lapping the ends which join the curves to the straight pieces. 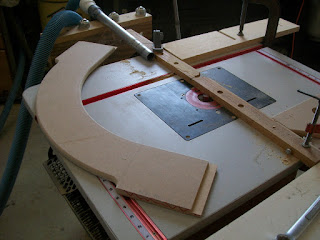 Now, you might have only been reading till now just to find out the exact secret of how this shelf is supported on only one edge.  Congratulations – you endured ~720 words to get to this point, and I know it was no easy task.  The secret is Plate Joiner with #20 biscuits.

Basically, a furring strip drilled & countersunk on 16-inch centers and slotted for biscuits was mounted to the wall studs.  Although the smoke detector wires follow where the device was relocated, the electrical box itself was left & covered with a blank plate in case I decide to run track wire through it later. 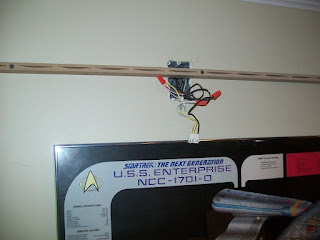 With a plan in place, installation consisted of marking/cutting everything to align with the wall studs. 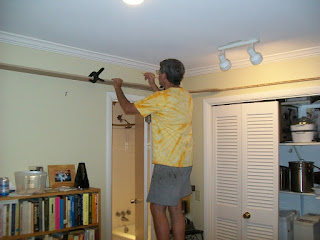 After cutting the first furring strip, I realized another roundover procedure would be needed on one end each custom-fit  strip to match part of the curved section.  Since the big router table was set up for lap joints, I pulled out my original router table and mounted the router I got in high school in it with the roundover bit.  This is the first project in a while that required three routers. 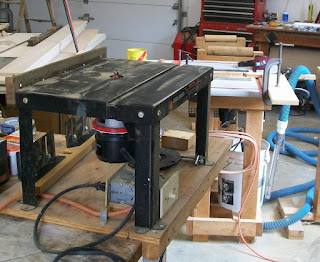 Since there are ~184 biscuits involved in the T&K Railway and they all fit tightly, only the biscuits on either side of the mounting screws were glued.  The lap joints were also glued and clamped until dry.

It was a two drill press operation – One to drill, and the other to countersink for the screw heads.  I ran out of photogenic work supports on the project.  The table-top drill press’s work support is an oak 2X4 clamped to a Jorgenson clamp tightened on to the door. 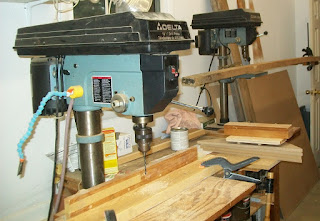 On the first Saturday of inside work, the central air conditioner conked out.  Although it was not unreasonably hot outside, with all the lights I had on for the work, the train’s new room started getting hot.  Fortunately, I still had a small window unit left over from when the Airstream’s A/C quit. 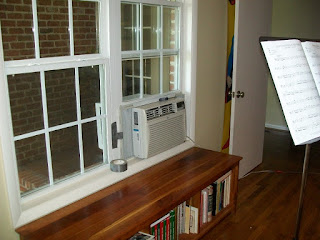 The plan had always been to paint the project after installation.  I hate painting.  Since any smile I have while painting is insincere, here’s a shot of a happy Number 1 son helping me mask off the area. 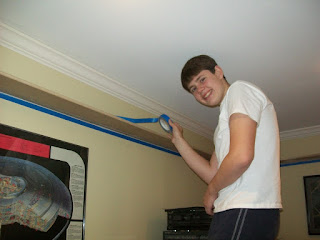 After caulking, priming, and painting, new & old track was screwed down before running a power bus around the perimeter.  Five different taps were used to supply power to the 58 feet of track. 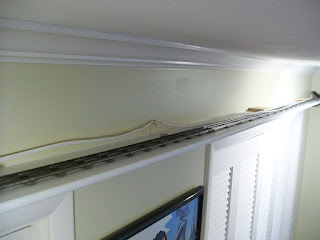 To my reckoning, it’s been about 40 years since my 63 year-old locomotive developed tractive force.  Although there is a bit of a story involved in getting Lionel 2034 to steam up again, it is a tale for another time.  Suffice to say it did steam up without having to buy anything. 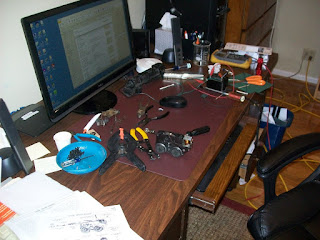 Since the video was made, Kim & the Boyz gifted lighted sleeper and mail service cars to the Railway.  It looks awesome in action.

I’m thinking about other improvements like a backdrop of sky or something.  Feel free to comment with any ideas. 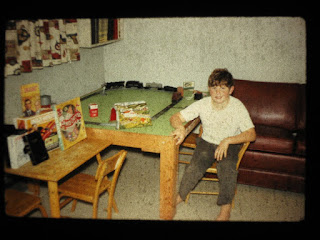