Around a year ago, I wrote about the difficulties of getting my family heirloom clock running again.  In concluding the post, the hope was expressed that my clock toolbox would not come out again any time soon for this project.  Sadly, the clock only ran for a few weeks before the time-side mainspring broke. 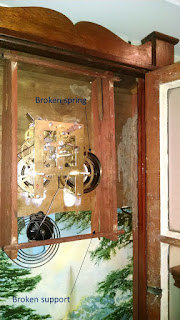 To add to my frustration, it broke with such force that it fractured one of the clock face supports.

Since it was essentially a new movement, I decided the failure was due to a bad spring.  Instead of repairing this movement it was swapped with the first replacement movement (click here to read the original tale) as that movement had already been repaired, and was simply sitting in a box waiting to run again.

Maddeningly, that movement only kept time for a few weeks before its time-side mainspring broke.  In frustration, I walked away from the clock for several months.

After reviewing several options, I decided the best course of action was to replace both springs with high-quality versions made in Germany.  Doing this requires disassembling the movement.

The first step in getting the movement apart is to contain the springs’ energy so they do not continue to run the movement or, in the case of the broken spring, press on other gear arbors.  To do this, the springs are wound up tight & fitted with special C-rings to keep them wound.  But between one spring being broken, and there being no plans to reuse the other one, hose clamps worked better for the effort. 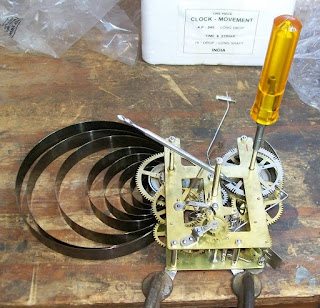 The time-side spring was found to be broken about 2-1/2 turns out from the center. 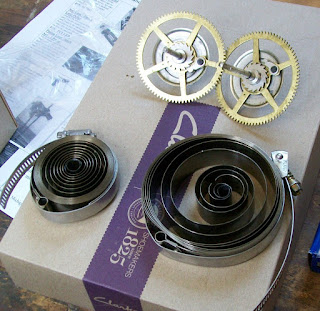 New springs come tightly wrapped & held together with baling wire.  As such, the springs cannot be mounted in a mainspring winder to have the wire removed.  I find holding the spring flat against the table with leather gloves with the wire is removed works well to get it safely opened. 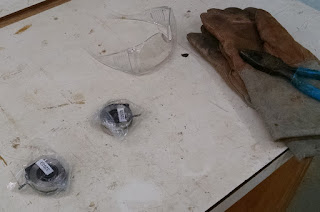 Although relatively clean, the springs come dry, and must be lubed before use. 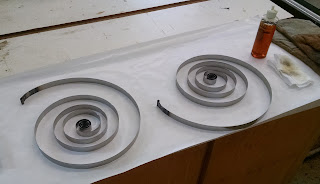 I have an Ollie Baker mainspring winder which makes easy work of mounting springs on arbors. 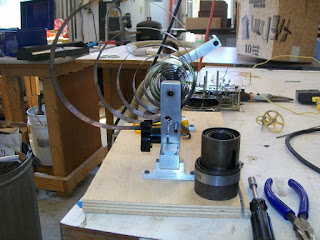 For reassembling a clock, the C-rings mentioned earlier work are easier to remove from the assembled movement than hose clamps. 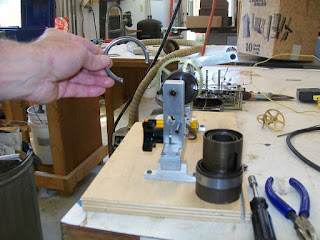 I always have to remember to place the C-ring closer to the gear so that the spring will fit inside to limiting pegs inside the movement. 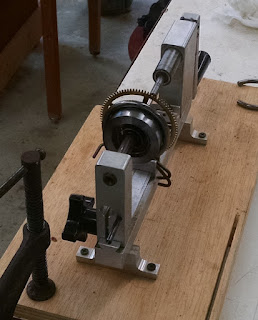 Reassembly of the movement went better than usual because a new, special-purpose tool was purchased to help nudge all the all the arbors into position.  It worked much better than the slender screwdriver I used to use. 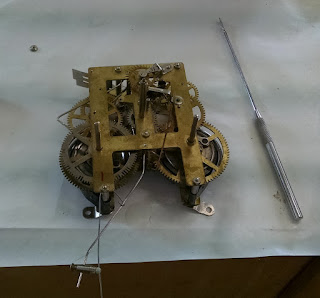 After synching the strike side, the movement was once again mounted in a temporary frame and allowed to run for a couple of weeks.  The new springs performed better than the old ones because the clock appeared to keep more even time than before.

The opportunity was taken to relocate the clock to between the two smaller clocks.  It certainly looks better being centered. 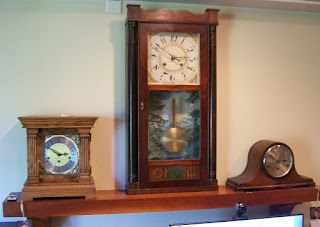 I have high confidence in this repair.  But, we’ll see!