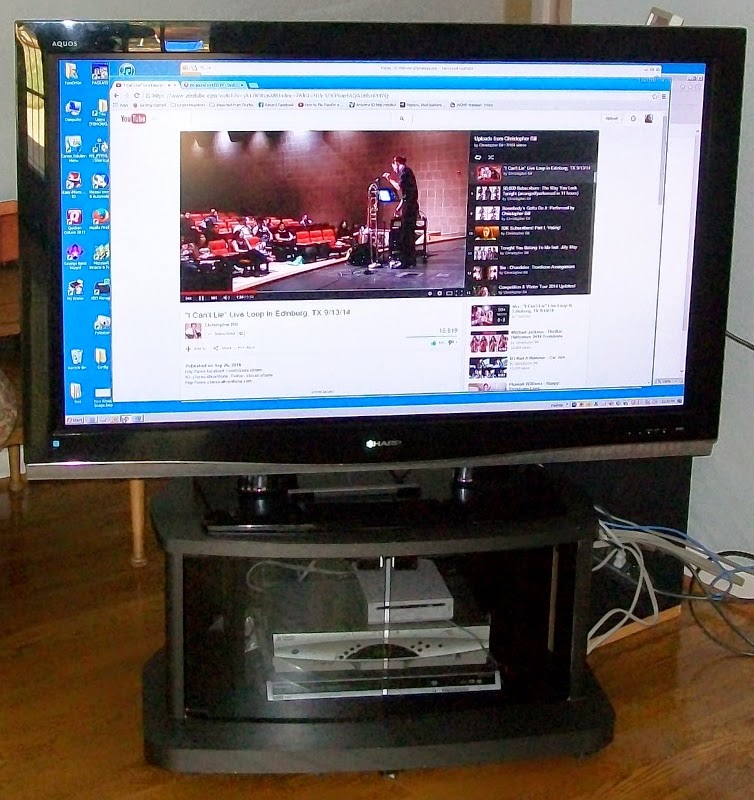 I get a lot of enjoyment listening to many of the musicians on YouTube and iTunes.  But after burning CDs and queuing playlists on the iPod to play on the den stereo started getting old I decided to run an audio line under the house to connect the computer directly to the stereo.  The convenience was great; wish I had done it sooner.

But after a week or so I decided it would also be neat to watch what was happening on the den’s TV while listening to it on the room’s big speakers.  While Smart TVs are all the current rage, the boob tube in the den ain’t that bright due to age.  For a variety of reason$ I decided to run new wires to it instead of replacing it with something that can spell WIFI.

After looking at the computer’s outputs and the TV’s available inputs I was pleased to see that the purchase of an HDMI cable would interconnect the two and provide both video and audio to the TV.  Amazon offered one of appropriate length for an insanely low price, and delivered it for free two days later.

Although there was no reason the setup should not work, the cable was run down the hall first for a GO/NO-GO check. 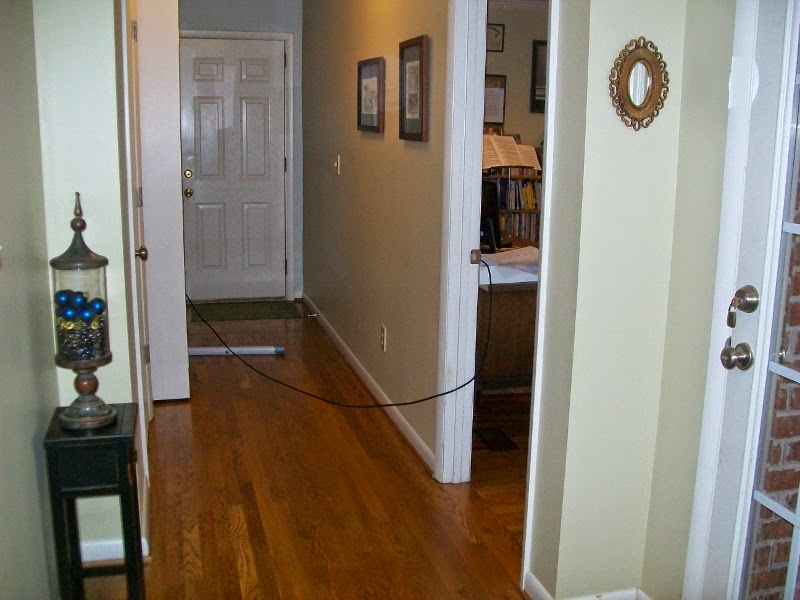 Immediate success on the video portion.  The audio took a few mouse clicks on the computer to get it going. 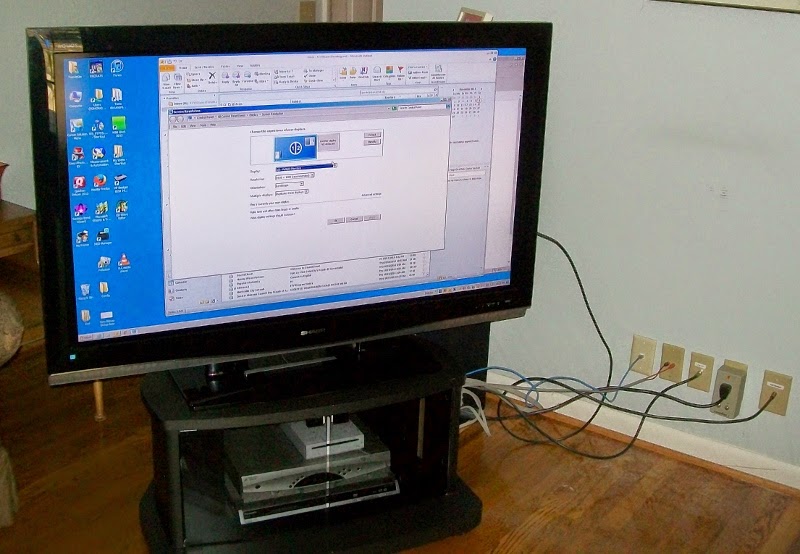 Usually, when wiring a room for either power or signal, I run wire off of a spool and crimp/solder it to the wall plate’s connectors.  HDMI cable, with its 19 individual signal wires, is only commonly available with the ends already installed.  The wall plate has a short pigtail in which the end is installed. 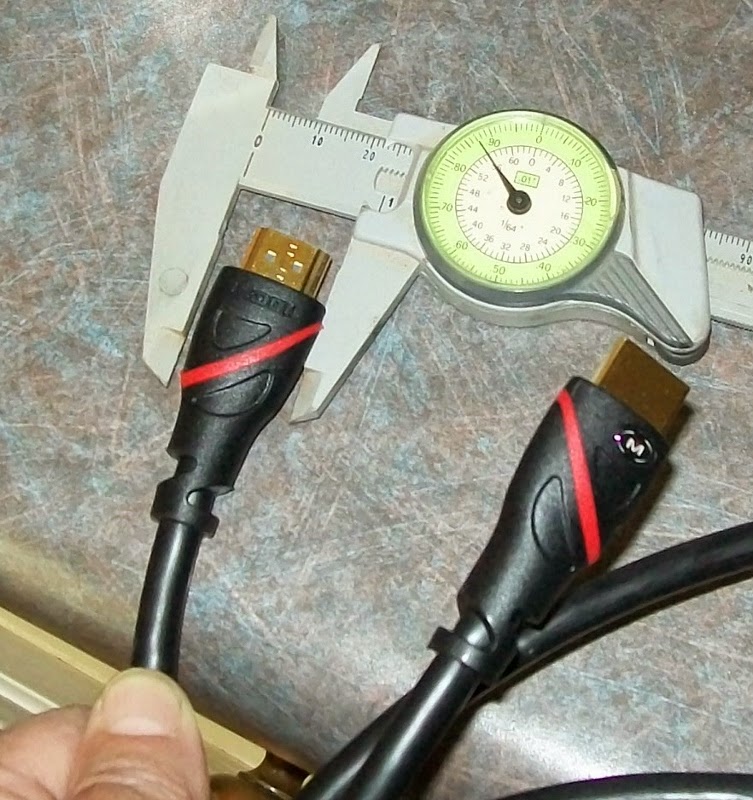 Fortunately, the connector was slightly smaller than the wiring drill I already owned. 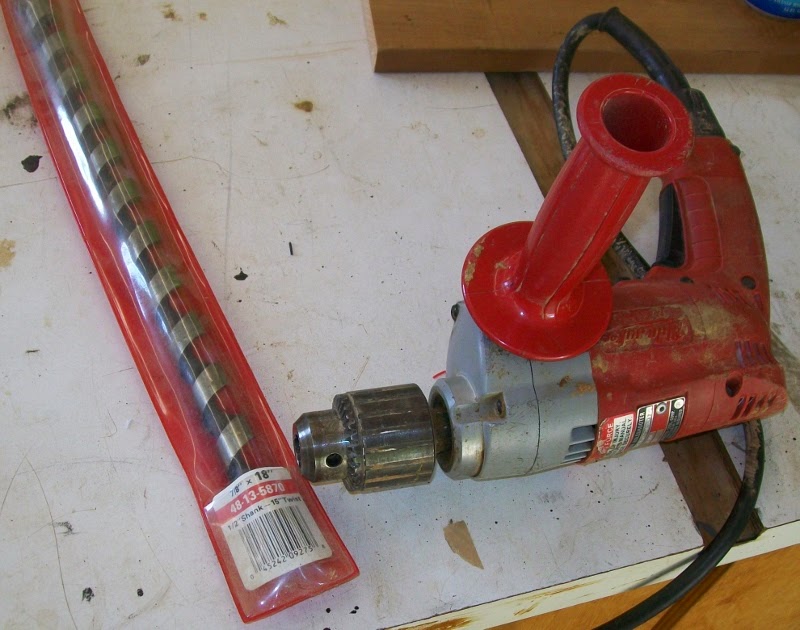 The problem with adding individual capabilities over time to a room is that one can end up with a lot of wall plates. 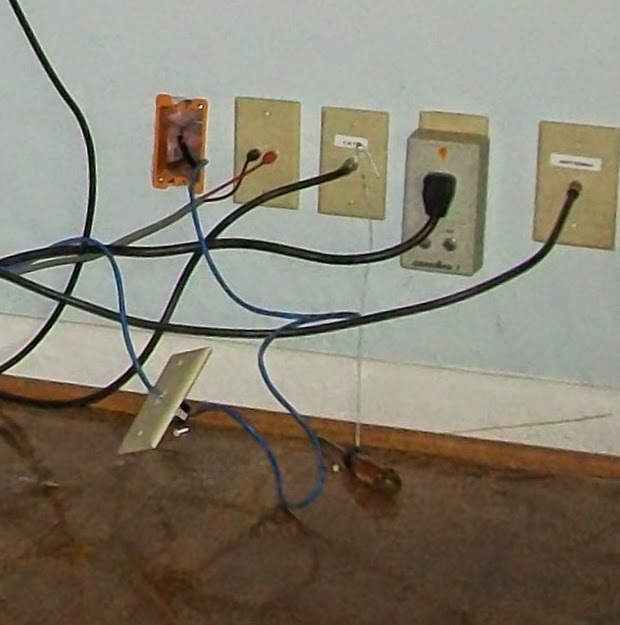 The computer room’s wall is not as bad since many functions are doubled-up.
... 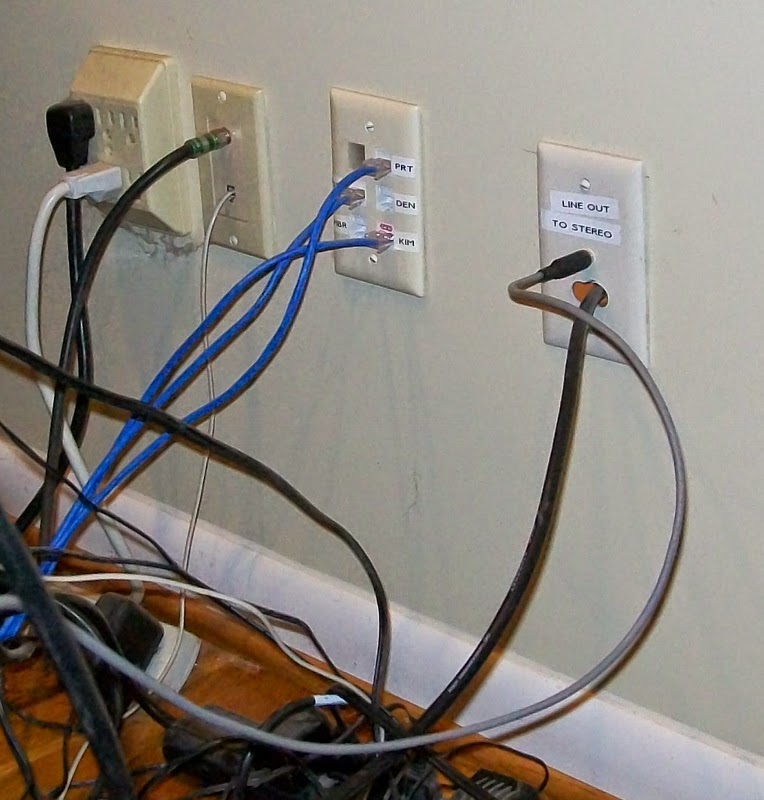 Between not wanting to cut another hole in the sheetrock nor purchase some rather expensive, specialty wall plates, I decided to run the HDMI wire out of a hole drilled in an existing wall plate directly to the TV or computer.  Although no major issues are expected, the specialty wall plates can be easily added later.

The new setup worked out even better than anticipated… until a new issue was noticed: Now that a computer was nowhere near, I never realized how often my mouse had handled the “Click here to skip advertisement” button.  It was annoying to pause dinner preps to trudge down the hall to do nothing more than click a button.  Remote control of the computer was needed.

Once again Amazon rose to the challenge, and offered a wireless keyboard & mouse combo for a reasonable amount of money.  The immediate problem with using the hardware was that there were communication-blocking walls between the computer where the hardware’s USB transponder would be plugged in, and where the mouse & keyboard would be used.  The transponder would need to be moved to be within visual range of the hardware.

To complicate the issue, the length of USB extension cord necessary to extend the transponder exceeded the magic number of five meters (~16 feet).  A USB repeater would be required to span the required distance.  Once again, though, Amazon had one available with a reasonable price tag. 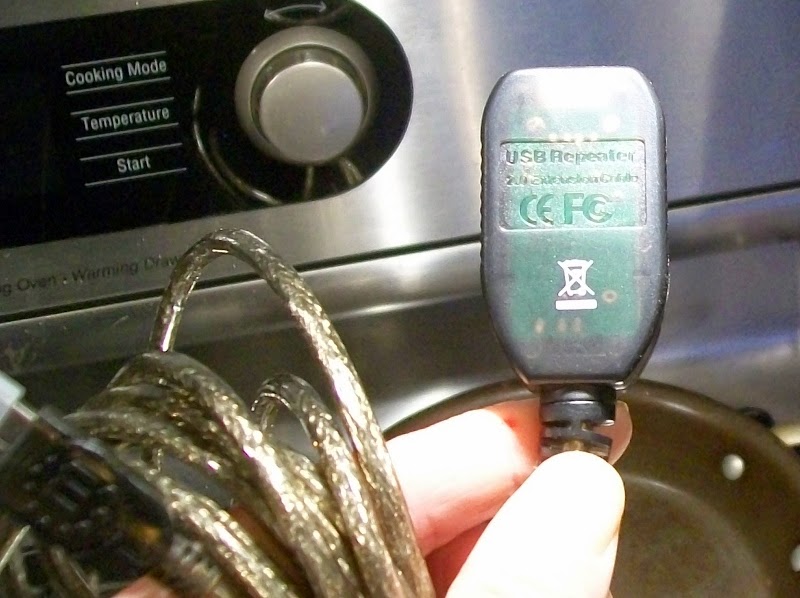 This time the new wire was run to come out on the wall which services my cordless headphones.  This will ensure the mouse and keyboard can be operated from the kitchen as well as the den. 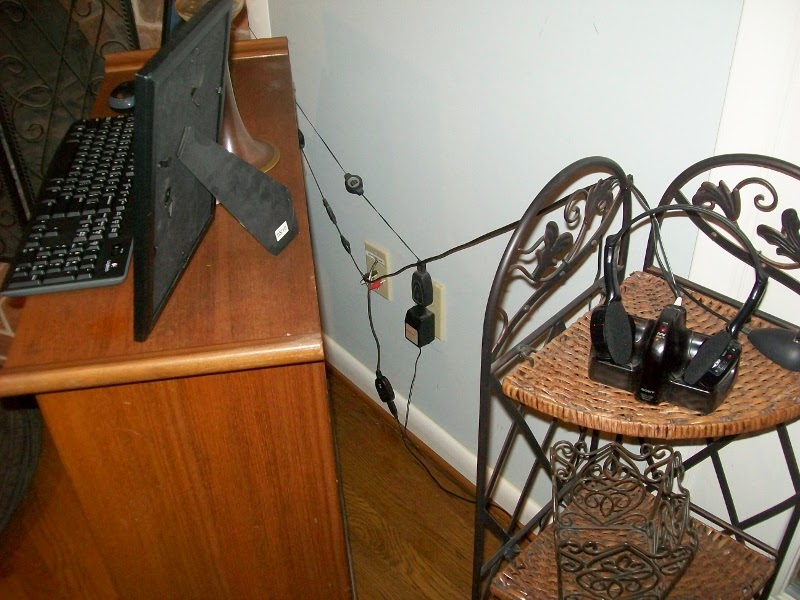 The transponder, mounted in an old D-Link WIFI dongle holder, is quite unobtrusive. 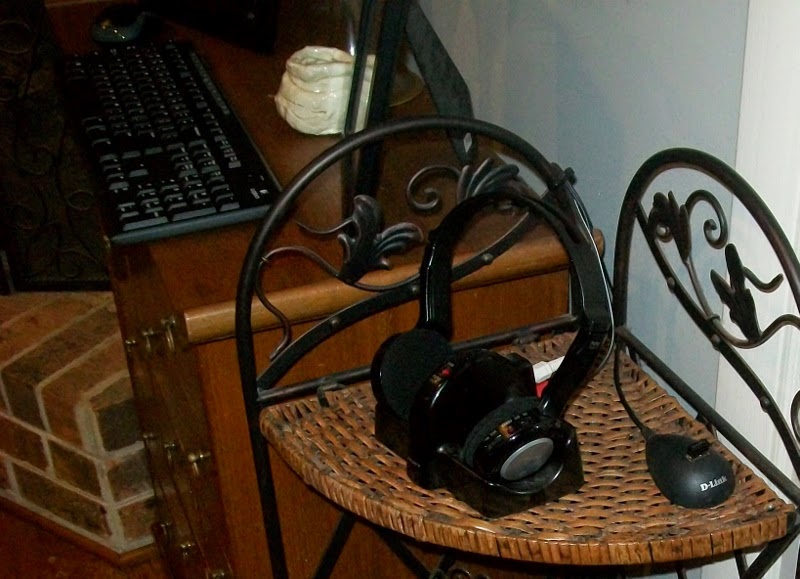 The latest new wiring has been in place for a week now, and I haven’t found anything else to add or change.  Time to kick back in the La-Z-Boy® and enjoy! 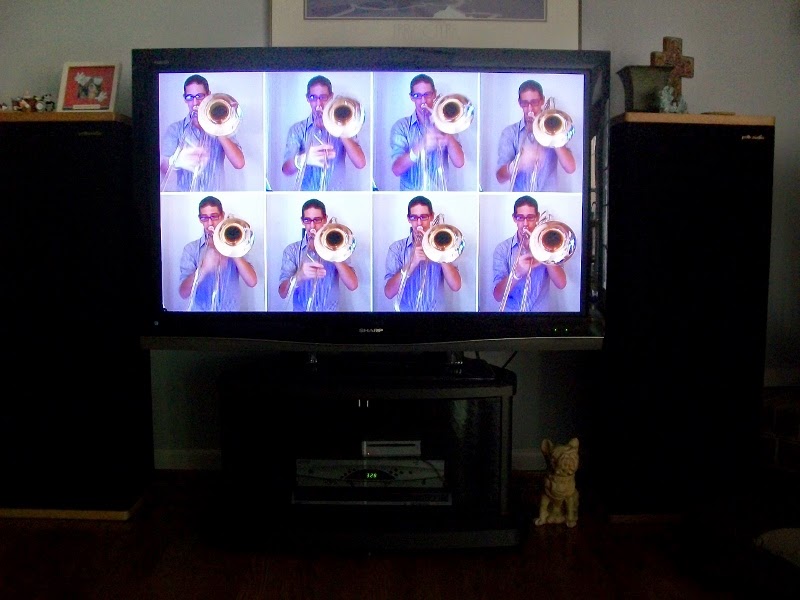