Even though I have not been at the trombone for a year yet, thanks to a yard sale another trombone, a Cleveland 605, now graces my bass clef instrument collection. Although the slide is worn, the horn is still playable.  The instrument caught my eye because the mouthpiece it came with, a Bach 7, was recommended by some on the Internet, and I was interested in trying it out.  Since the total cost of the trombone/case/mouthpiece was less than the cost of a new Bach 7 shipped from Amazon.com I now have a backup beginner trombone.

The instrument did have two significant issues, though – the slide lock spun freely instead of latching at its stop, and the slide clanked when slid to first position.  Fortunately, both issues were due to the lack of dampening material between the inner & outer slides.

After thoroughly cleaning the ~39 year-old instrument, I scrounged around in my shop and found an O-ring which appeared to be the perfect thickness for the task.  After slipping it down into the deep recess of where it was needed, the slide quit clanking.  But the slide lock now would not lock at all.  The O-ring had apparently hung on something (probably a bumper remnant) before hitting dead bottom, and the resultant gap made the effective O-ring thickness too great.

After picking through my toolbox yielded no mechanical means long enough to get down to the O-ring to remove it, I decided to dissolve it with chemicals.  Sadly, while just about anything will dissolve a rubber O-ring, no commonly available chemical appeared able to dissolve the neoprene version I installed.  A special tool was going to be needed.

I thought about taking the slide to a brass instrument repair shop until Mr. Google advised me $75 was the going Hourly Shop Rate.  Taking that route would have more than doubled my investment in the instrument.

Fortunately, Ferree’s Tools out of Battle Creek MI sells the tool I needed for a reasonable cost.  Since my other trombone’s bumper material is close to being worn out, I ordered the tool.  I wanted to buy new bumper cork from them, but they only sold it bulk packages for more than I wanted to spend.  Although eBay had a couple of vendors selling the needed parts, in what was no surprise shipping & handling was more than the parts themselves.  Perhaps it was time to check locally.

So, I went back to the local music shop who originally sold me a learn-to-play-the-trombone book.  Although their back room had lots of brass instrument repair tools strewn about, I could tell their technician leaned more towards woodwind repair, and although I watched him scour the shop in earnest there were no bumpers to be found.  Nice guy, though – I would definitely keep him in mind should I ever need a woodwind repair.

The next stop was a place that did nothing but band instrument repair.  Unfortunately, the lady who greeted me when I walked in only did the books, and advised me to come back when the man who did the actual repairs returned from a service call.

Mr. Google advised me there was another music shop on the other side of town who also advertised instrument repair.  Since it was a nice day out I decided to drive over with the resolution of getting the bumpers from eBay if this place did not work out.

The lady who greeted me when I walked in had no idea of what a trombone bumper cork was, and walked me over to an older gentleman in the front office & presented my request.

“Got no cork.  Only felt” he said kinda gruffly while appearing to decide if I looked capable of effecting the repair.

“Felt would be great!” I replied.  “Because the trombone has neither right now.”

“Do you have the right tool for the job?  Any trace of the old bumper will keep the new one from working right.”

“Yes sir, I do.”  I figured there was no reason to explain why I had already found that out.

After a brief trip to the back, he returned with the four felts I requested (two for each of my trombones).  As he was ringing the sale up, he both asked again if I had the right tool, and reaffirmed the importance of removing all traces of the old bumper.  “Yes sir, I bought it from Ferree’s.”

He appeared to be simultaneously pleased and relieved at my choice of tool.

“You’ve got the right tool.”

Two dollars later I was on my way home. 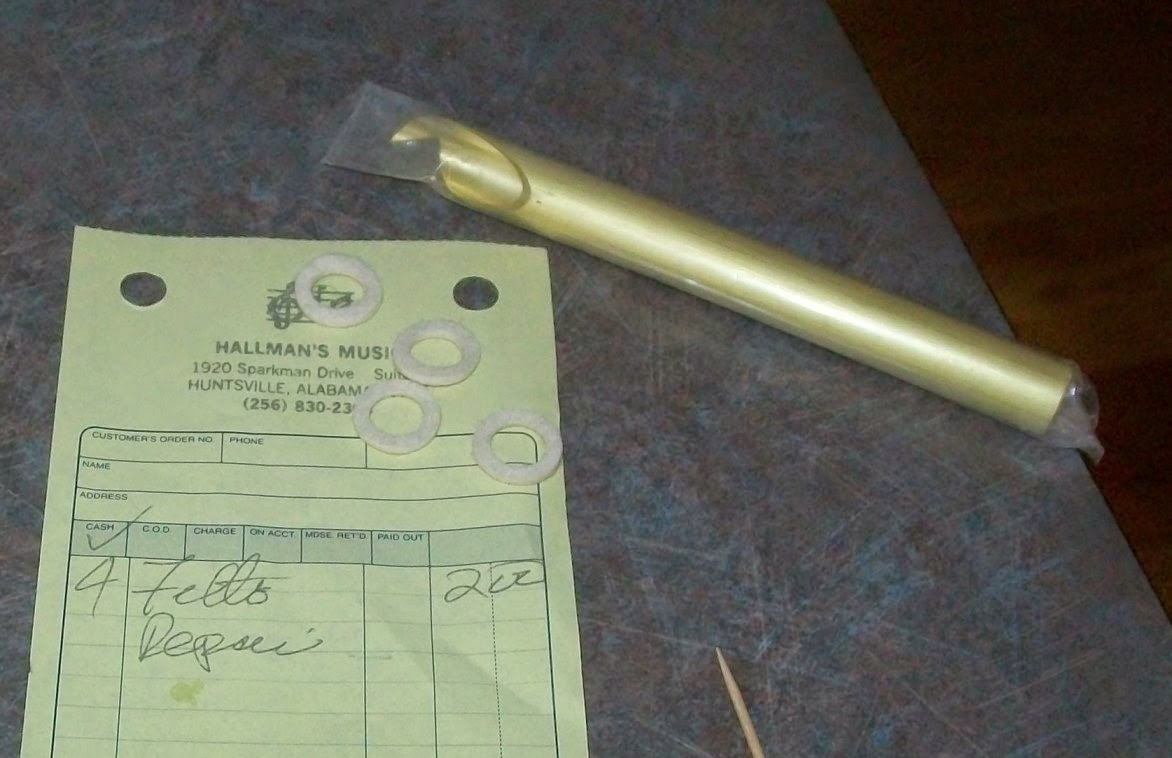 The funny thing was that even though I had probably the only tool capable of getting the O-ring out, I thought it was going to be a huge challenge, and the O-ring was going to come out in small pieces.  Nope – even as tight as it originally fit, the O-ring was removed intact in under a minute.  Cleaning all of what remained of the original green felts ended up being the time hog. 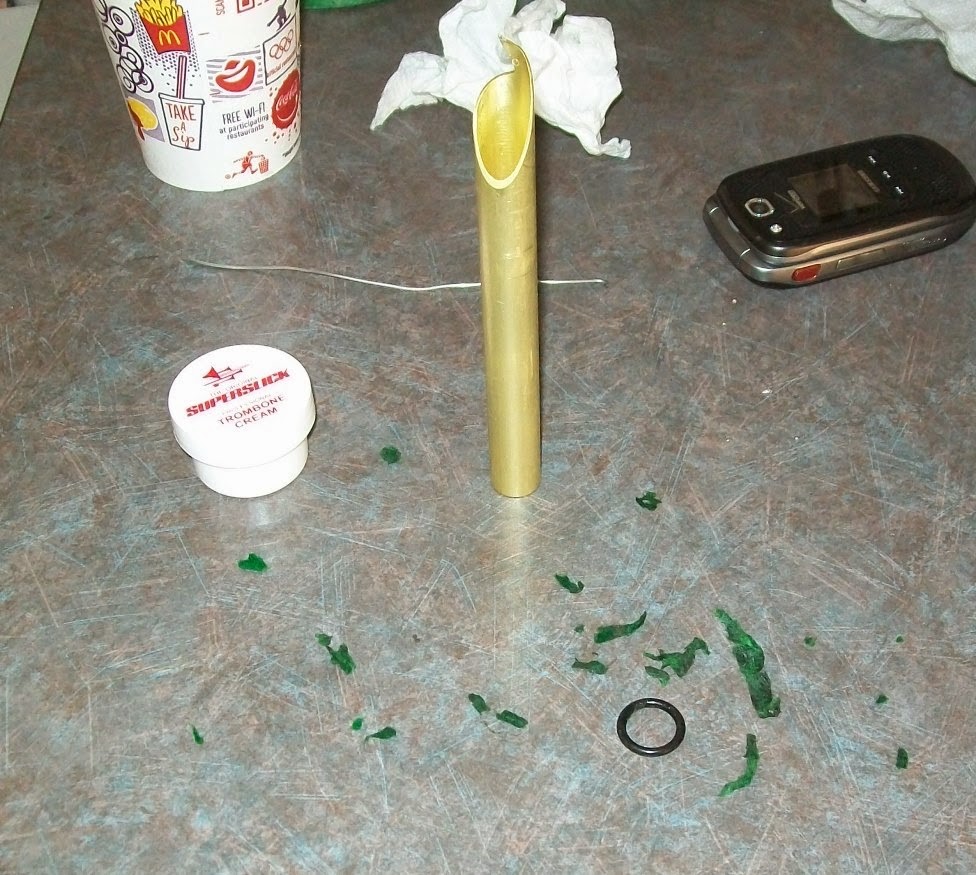 It took well over an hour using a combination of WD-40 and the special tool before I was satisfied that all traces of the old felts were gone. But my reward for the time spent was to have a slide that now latched correctly, and not clank when sliding into first position too fast. 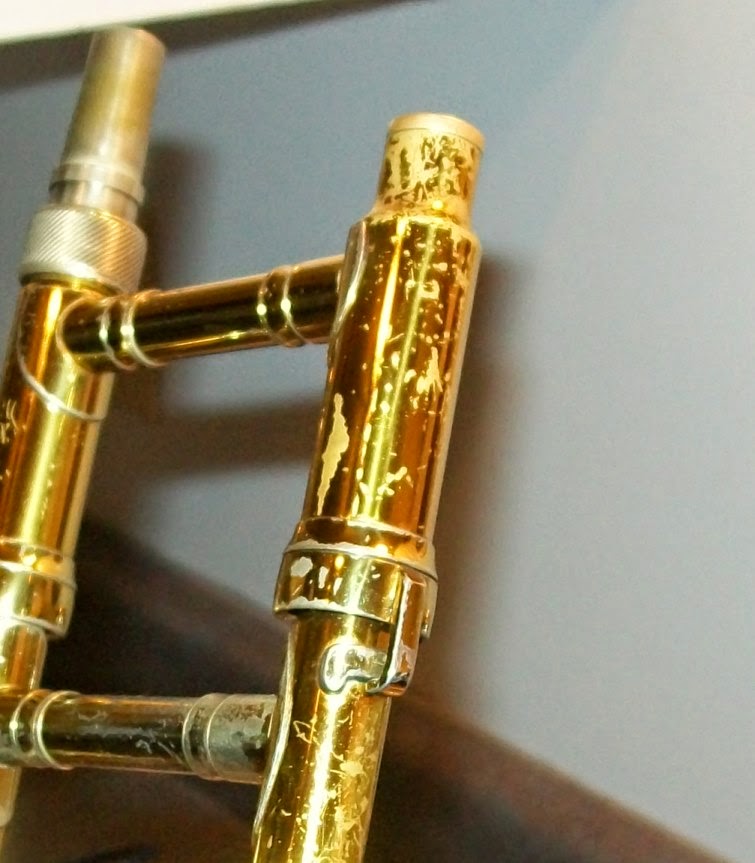 With the slide now behaving more like it is supposed to, I practiced with the trombone for a couple of sessions.  I like my Olds Ambassador better because the slide is lighter, and the spit valve spring does not require the pinch of death to actuate.  The jury is still out on the mouthpiece, though.  Perhaps one day I will get some trombone lessons, and find out why it was different than I was expecting.

Hopefully, the next trombone I see in a yard sale will have an F attachment – some people on the Internet think they’re pretty neat…